The short URL of the present article is: https://lhslance.org/3nkt8

Sibling rivalry and revelry: Is it cool to go to school with your kin?

Siblings show their love for each other. Clockwise from upper left- Kate and Anne Cameron, Jackson and Kennedi Ambush, Devin and Haley Barge, and Alyse and Gail Montgomery.

The short URL of the present article is: https://lhslance.org/7lfd8

Oh that dreaded moment comes… You see your sibling walking down the hallway way towards you. What are you going to do? Turn and walk a different way? Keep walking and pretend like you didn’t see him/her with the possibility of getting in trouble at home for not saying “Hi?” Or suck it up and say actually acknowledge the brother or sister.

Even though most of us have sibling experience, it seems like it’s a one-of-a-kind crisis.

The positive side of having a sibling at school is that it can be fun hearing about teachers in common and other gossip around the school.

” I love going to school with my sister. She’s my best friend. It’s the best experience a sibling could ask for.””

While some people have a different view. Devin Barge, a sophomore, said, “This is my sister who I love SOOO much.”

Nell Darby a blogger for The Guardian talked about her personal experiences, “Studies have identified that siblings may provide some shy children, at least, with a sense of ‘protection’ in the school environment…”  and Mrs. Ilana Blum, school counselor, agrees.

Blum said, “They feel safe because the older sibling feels like it is their job to protect their sibling. They can do this in my different ways: introducing them to their friends, showing them around the school, or just being that person to lean on after failing a test.”

Seeing your sibling at school is both a blessing and a curse. Here are some Pros and Cons:

Pros of having them at your school:

Cons of having them at your school:

According to Springer Link, “Half of the economic inequality comes from family and community influences…” So if you’re an older sibling, then don’t always have a bad attitude during school. You could be hurting your sibling’s success.

On the other hand, if you are a younger sibling, don’t take everything big brother or sister as the truth. Go out and explore. Maybe you’ll find something that interests you.
The worst thing that you can say after four years is follow in the footsteps of a sibling without making your own path. You don’t want to live with that regret. 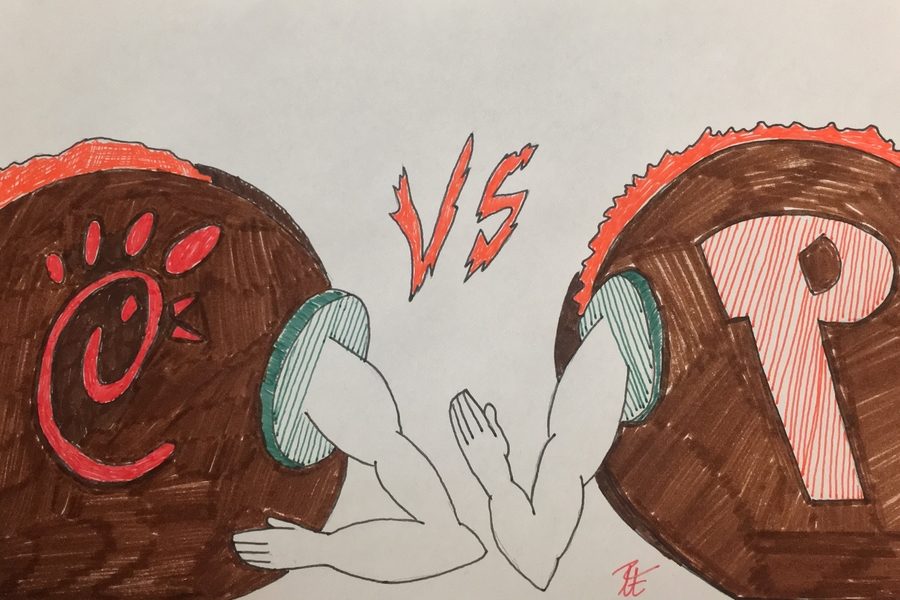 The Popeyes and Chick-fil-A sandwiches fight for dominance.

The short URL of the present article is: https://lhslance.org/s2989

Consumers have been going clucking crazy over the new Popeyes chicken sandwich. Car lines wrapping around the block and debates on which buns are better have been raging on social media.

“But you can’t get one on Sunday,” replied Twitter user @giardinop.

“Neither at Popeyes since there’s no buns,” replied Twitter user @_KrystalLee_.

Chicken consumers want to know which chicken sandwich sits on the fast-food throne.

Popeyes then responded on Twitter by asking Chick-fil-A, “…y’ all good?”

Bruno Cardinali, a Popeyes marketing director, said that he and his writers spent around 15 minutes thinking of that comeback. Most people cited this as the first shot fired in the WWC (World War Chicken).

Even though the feud is far from over, Popeyes was definitely the winner of this battle; with the overwhelmingly positive responses to the new Popeyes sandwich and a 40% increase in Popeyes social media after Chick-fil-A tweeted at them on August 19th.

Which chicken sandwich is better?

It’s not a new thing for fast food franchises to get into heated Twitter debates with each other, but this one took flight.

Whether you care about the whole chicken sandwich craze or not, you’ll get a good laugh from reading each franchise’s Twitter feed.

The most infamous fast-food franchise to call out other franchises as well as customers is Wendy’s. In regards to this debate, Wendy’s posted on Twitter, “ Y’all out here fighting about which one of these fools has the second best chicken sandwich.”

Wendy’s pulls a fast one on the whole debate with its chicken sandwich. With 330 calories and fewer saturated fats, carbs, and sugars, Wendy’s beats most fast food franchises by providing a healthier chicken option.

From the very beginning, the Popeyes chicken sandwich was a game-changer. Consumers craved this new sandwich, and Popeyes employees had to suffer the wrath from consumers trying to get the first bite.

However, shortly after the sandwich’s release, Popeyes was all sold out.

Prior to the run out, I got my hands on one of the Popeyes sandwiches, and I must say that it lives up to the hype. The toasted brioche bun provides a soft cushioning for the crispy chicken breast. The sandwich also comes with the condiments of pickles and lite mayo, which enhances the sandwiches overall flavor while not being to overbearing. Although most people would be on team Chick-fil-A, I must say, Popeyes has allured me towards those Louisiana spices.

Through the commotion of the poultry palooza, Popeyes employees were bombarded with business that they were not prepared for.

Former Popeyes employee, Jack Riche, said, “It kinda sucked when it started because we weren’t prepared and didn’t have enough people or ingredients. The drive through line would be around the whole store, and people would have to wait for at least 15 minutes. We also ran out of fries, onion rings, mac and cheese, and even flour and batter at one point, so we couldn’t make anything. Plus we got yelled at by customers.”

The nutritional facts about the Popeyes sandwich are scarce. The details about the sandwiches fats, fibers, sodiums, and proteins are unknown, but we do know that the sandwich has 690 calories. This factor alone would be putting it on the more unhealthy spectrum of fast food; whereas, Popeye’s rival sandwich, the original Chick-fil-A, provides a much healthier dining experience. The Chick-fil-A regular chicken sandwich has 440 calories and is made from scratch by being hand-dipped in egg and protein-milk batter and pressure cooked in 100% refined peanut oil. The sandwich is then served with a toasted bun and pickle chips.

Senior and Chick-fil-A employee Rachel Hall said, “Chick-fil-A is and has always been known as “The Home of the Original Chicken Sandwich” and we stand firm in that. Our sandwich is one people love and won’t ever tire of.”

Following the run out, Popeyes joking implemented a BYOB policy at their stores. BYOB of course meaning bring your own bun. The box is just a three-piece tender meal, with the added perk of getting to choose which bun type you would like for your sandwich. This promotion is clearly a joke, poking fun at customers who couldn’t wait for the sandwich’s return.