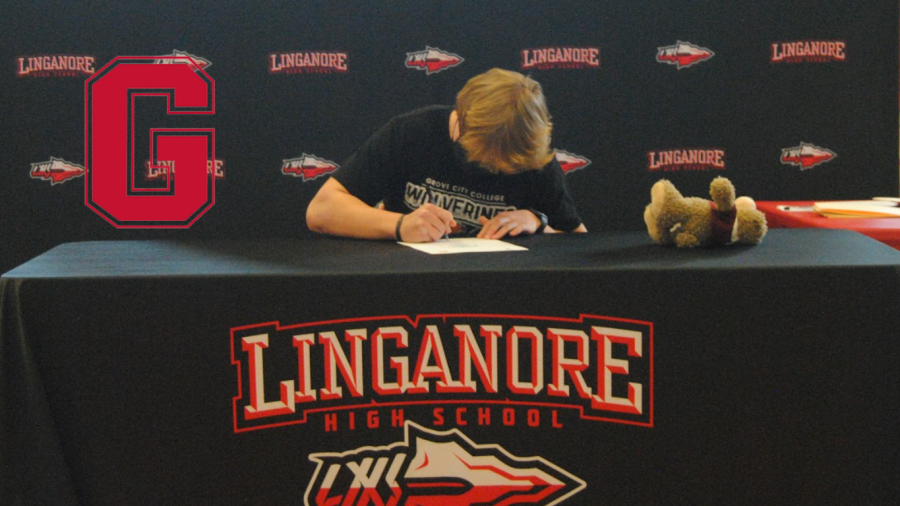 #NationalSigningDay2022: Luke DeMember signs to play football with the wolverines at Grove City

by Caroline Hobson, Editor in Chief

On February 2, Luke DeMember signed his National Letter of Intent to continue his athletic career at Grove City College. He will join the Wolverines in playing football and studying exercise science.

DeMember has been playing football for as long as he can remember. He has grown up in the Linganore football community, from watching his older brothers on the sidelines to playing under the Friday night lights himself. He has always been a part of the football life.

“Luke will be attending Grove City College and following in his brother’s footsteps. Luke is a member of our state runner up football team and you know he’s just one of those guys. He’s extremely fun to coach. He brings his energy in every day. He trains his body to his maximum potential and just really became an outstanding football player for us,” said head football coach Rick Connor.

When DeMember was choosing colleges, there were several qualities that led him to Grove City. The kind, welcoming coaches, family connections, and academic excellence is what pushed him to choose Grove City.

“First I looked at the academic side of things with having the major I wanted to do in college, and then when they offered me a spot on the football team it was kind of like a cherry on top I guess. It was really nice,” said DeMember.

DeMember felt that the campus was always sort of home because of his family legacy at Grove City. All of his siblings have attended or are currently attending Grove City. He also shared that his older brother, Matthew DeMember signed to play football there as an interior defensive lineman and is now a coach.

“My older brother was probably the one who inspired me the most to continue football because he had done the same thing and he had kind of just told me how fun it was and how many good memories he had had with the team, so it kind of pushed me to keep going,” said DeMember.

“I knew the campus really well and it always kind of felt like home and really the place for me. When I went on my football visit I was like yeah I’m going here, and in my mind I committed there,” said DeMember.

Another reason DeMember chose Grove City was for the small, yet welcoming environment, and head football coach Andrew DiDonato who offered DeMember a position as an outside linebacker.

“I would just say how welcoming everyone is there, like in my experiences there everyone has been super nice, I honestly haven’t had any negative experiences there in all the times that I have been up visiting my siblings and one of the main things that pulled me in was the head football coach. Just hearing him talk to us and treat the players just let me know he cares. . . my brother actually had to retire because he got too many concussions, and the head coach of the football team was the one who would drive him around campus when he couldn’t drive and he’s the one who took him to the ER one night when he was having really bad headaches and that really made it feel like he actually cared about us and that was a really big thing for me, ” said DeMember.

Staying on a tight schedule with both football and school is nothing new for DeMember. On top of football, DeMember is also part of the varsity swim and dive team  and a very active member in his YoungLife chapter.

DeMember also enjoys the relatively small class size that Grove City offers as it gives him an advantage to ask questions and stay on top of his work.

“I really like being part of a small school because in a larger school when you’re in a lecture hall of like 500 students you can’t really ask that question to that teacher in that moment you really have to wait until office hours; whereas, with the smaller classes you can just ask the teacher and they really know you as a person not just as a name,” said DeMember.

DeMember has learned through his many years as an outside linebacker to constantly be on his toes thinking about his next play. While he is nervous, he is ready for the challenge to show Grove City all that he can do both on and off the field.

“I would say I’m definitely nervous just because of how hard everyone hits in football at that next level. I went to a game on a visit and I was honestly just blown away just looking at the people who play my position. I was kind of like dang they are out there killing everyone each play and that’s just amazing to me. I think I’m both excited and nervous for the challenges of college football but I’m ready for the next challenge,” said DeMember.

“He plays in one of the most difficult, challenging spots we have where he has to line up the line of scrimmage offline of scrimmage, he just does a wonderful job. He’s so cognitive about his position, he asks so many questions to make sure he was doing it to the tea. He was an honorable mention in all areas and all conferences for us. Grove city is just getting an outstanding player and he will be a great player for them. He also does a great job both in the classroom and outside of school,” said Coach Connor.