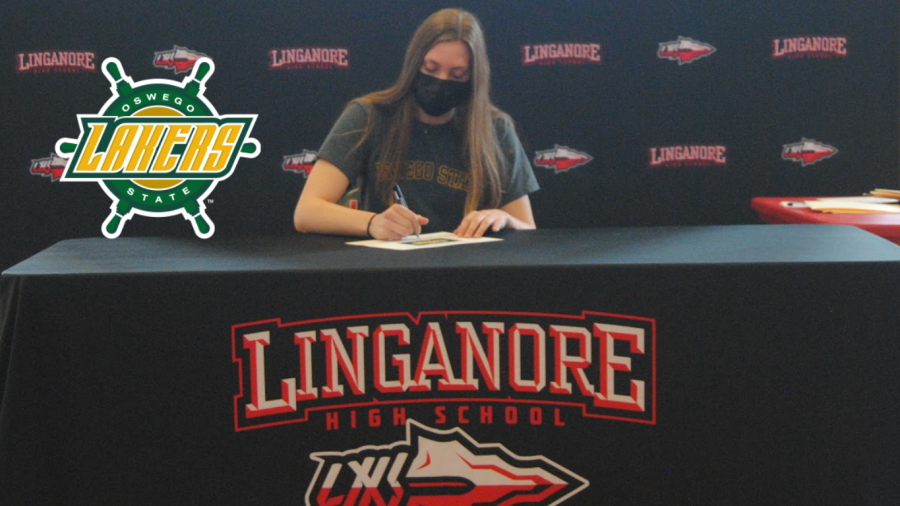 #NationalSigningDay2022: Lotito swims with the Lakers at Oswego University

Emily Lotito dreams of genetics, stars, and Lake Ontario as she prepares for her college swimming career.

On February 2, Lotito signed her National Letter of Intent to continue her academic and athletic career at Oswego State University. She will be swimming for the Oswego State Lakers, with a specialty in breaststroke and distance events.

Oswego State University is a Division III school that houses all of Lotitos diverse interests. She is most excited to major in chemistry in their brand new science buildings and utilize their planetarium on top of her swim schedule.

In the future, Lotito would like to pursue a career as a genetics counselor or work for the CIA. She is planning to receive her bachelors in Chemistry from Oswego.

Lotito had offers from over 30 schools and her top five came down to Immaculata, United States Merchant Marine Academy, Colby Sawyer, Marywood University, and finally Oswego. She chose Oswego because it felt like a second home for her, and a way to reinvent her swim career to help her get better.

“Oswego State is right on Lake Ontario and I’ve always wanted to be near water. It’s a somewhat big schools there’s around 7000 kids, so I won’t ever see the same person all the time and I didn’t want it to be like that. They have a great chemistry program and they just built a new science building with a planetarium which is really exciting to me,” said Lotito.

Lotito has been swimming competitively for 14 years. She has swam for the Linganore Varsity swim team all four years of high school, and the Monocacy Aquatics Club for a total of nine years.

Lotito is also a part of the Monocacy Aquatic Club and has been a part of that club since age 12. She has qualifying times to Maryland Swimming’s State Championship Meet.

“I am best at distance freestyle and breaststroke. I think I like distance freestyle so much because I am able to hold a fast pace for a long period of time, and I have more endurance than others so I can swim longer and faster,” said Lotito.

The Oswego girls swim team were 5-4-0 in their 2021-2022 season. Lotito will bring her breaststroke records and fast freestyle to the team this fall.

“In swimming, there are time standards that the United States posts, and the highest time I have compared to that is a AA time, which is pretty decent for a 500 free. I could go to a sectional time with that, and really only the top 50 swimmers can go to sectionals. I think I’m 28th in the Mid Atlantic area, which is pretty good compared to other swimmers in the state,” said Lotito.

The Oswego team is small, and their head coach is Mike Holman, and he has worked to recruit Lotito since the end of her junior year.

“I’ve already met the coach at Oswego; He’s really cool. He and I have been emailing back and forth really since he started recruiting me my junior year. Plus I’ve already met most of my teammates, which is nice. When I went up there to tour the school I had brunch with most of the girls on the team so I know who i’ll be training with,” said Lotito.

Lotito has worked with her club team to improve her stroke, kick, and drop tremendous amounts of time during her high school career to get her to the college level. She calls the kick that she uses in the 500 freestyle the “Katie Ledecky kick.”

“I base my kick off on the Olympic swimmers. Olympic swimmers don’t really kick normally; they kick with one leg at a time to preserve stamina, which is what I do now and it really helps me in my distance events. I really don’t like kicking that much, so the kick has helped me a lot. I call it the Katie Ledecky kick because that’s what she does but there really isn’t a name for it. Ledecky is one of my favorite Olympian swimmer, and I just look up to her in a lot of ways,” said Lotito.

Since Lotito has been swimming for so long, she has overcome many challenges and obstacles keeping her from reaching her goals. She attributes some of her successes to overcoming challenges to her MAC swim coach Fred Hviid.

Hviid is a former Olympic swimmer and now coaches for MAC. He has helped push Lotito past her rough spots in swimming and helped her drop significant time in recent years.

“I’ve been with him for three years and he completely changed my stroke. I was in a tough spot in swimming, I couldn’t drop time. I was only gaining and I never really went anywhere. Then, the first meet I tapered for with Coach Hviid, I dropped maybe 5 seconds in 200 breaststroke, and I got a state cut. Then the same thing happened with 100 breaststroke that same meet, so he’s really changed my entire stroke. I really think he has pushed me to be who I am now,” said Lotito.

“Emily Lotito has proven to be a resilient, dedicated and hard working student and athlete who had persevered through the hardship of a shoulder injury to continue to be one of the strongest swimmers in my group,” said Hviid.

One of Lotito’s biggest goals is to beat her dad’s times. She shared that her dad is also a phenomenal swimmer and has inspired her to be faster and push herself harder to become the best swimmer and student athlete she can be.

“My dad was a swimmer, but he wasn’t as competitive of a swimmer as I was. He swam for West Virginia University for a semester, but he had to stop because his major was very demanding, so whenever we talk about swimming he always tells me how much of a faster swimmer I am then he was, and I’m trying to beat his record in the 100 breaststroke. I’m close to beating his time, but still want to push myself to be faster and to work harder,” said Lotito.

Mike Lotito tends to tease about who is faster, and Mike always gives the crown to Little Lotito.

“Emily is already way faster than I ever was in the 100 free. Her best time is well under a minute…. I never broke a minute. She did this by sticking to her craft, perfecting her technique and dedication herself to swimming. I was never as dedicated or disciplined as she was,” said Mike Lotito.

Lotito’s parents are beyond proud of her accomplishments as both a student and a swimmer.

“Emily has so many special qualities. If I had to pick the first one that comes to mind it would be her resilience. She came up against many challenges such as an ongoing shoulder injury. That had some setbacks but she pushed  through,” said Emily Lotito’s mother, Shari Lotito.

Lotito is always looking to improve, whether it be through her stroke techniques or just spending more time in the pool. Lotito is excited and ready for the challenges that her college swim career will bring her.