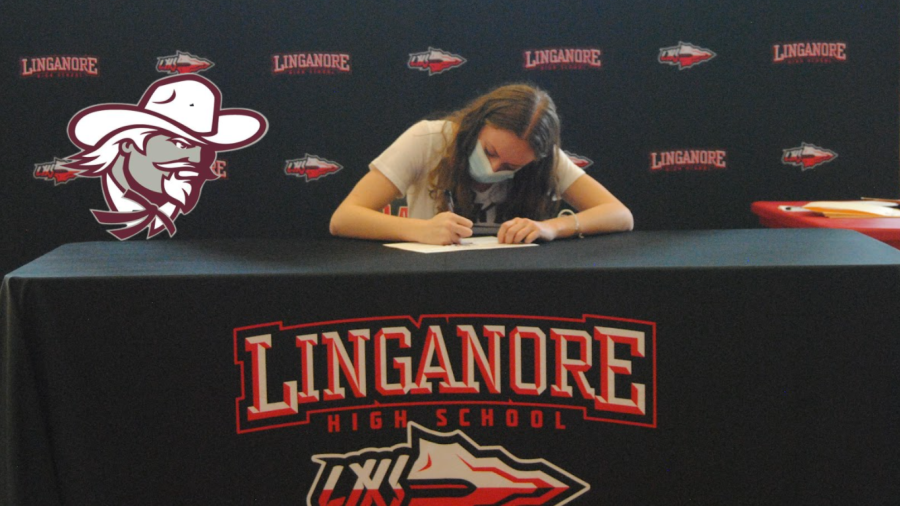 Anything is possible. I want to go as far as I can. There is definitely the possibility of playing professionally after college

Kilgore began her volleyball career starting at nine years old. Kilgore originally started as an indoor athlete, but has recently found her passion in beach volleyball. Kilgore would attend indoor clinics and compete in various tournaments. Kilgore was recruited as a member of the beach volleyball team.

Here indoor volleyball coach Andrea Poffinberger reminded the audience, “If you’ve ever walked in the sand, you can only imagine how difficult it must be to run and jump in the sand while trying to hit a volleyball. However, Kilgore makes it look effortless.”

Kilgore has been a hard working leader for the varsity indoor class 3A Volleyball team over the last two years. This season her leadership and skills drove the Lancers as they upset Tuscarora in the competitive playoffs.

Kilgore currently plays the position of Outside, Right Side as well as Defensive Specialist (DS).

In the outside position it requires an all around player. The athlete will play in the front row in the left position as well as being able to go into the back row. Sometimes floor captains never leave the game. Kilgore has been floor captain for several years.

Kilgore plays in the right position during club season which means she stays on the right side in the front position. There, she is focused on hitting, but plays defense as well.

As a DS, Kilgore is primarily located in the back row when needed and typically plays other hitting positions.

She finished the LHS season with 150 kills and 31 service aces. She also won team Most Valuable Player and was a Central Maryland Conference (CMC) Honorable Mention Recognition.

“Audrey is not your typical athlete, she is committed to perfection and that requires a mindset that many athletes don’t have. She has worked tirelessly through the years to get where she is now, ” said Poffinberger.

Eastern Kentucky was one of the last schools that Kilgore looked at during a recruiting process that began with NCAA Division II and Division III interests.

However, Kilgore knew at Eastern Kentucky she would fit in with the team’s positive work ethic and attitude. Kilgore fell in love with the school’s comfort, beauty and location.

During her first tour at EKU, Kilgore had the opportunity to speak with her counselor where she learned that she will receive plenty of guidance through every step and help with balancing her athletics and academics.

Kilgore is planning to major in Business Communications, with a focus in professional writing.

“I love writing, I find it super interesting. I want to work with a non-profit organization when I am older and do work for a good cause. I think I can use my writing experience and skills to really enjoy what I can do,” said Kilgore. Kilgore is an editor for Lancer Media.

EKU is a Division I school and competes in the Atlantic Sun Conference. Kilgore will be working with first-year assistant coach and recruiting coordinator, Jeff Patton. The new coach and player pair have already hit the ground running.

“He is super friendly. I kept updating him on my volleyball season. We met during a tour and it was really smooth after that,” said Kilgore.

Beach volleyball became a serious interest two years ago, and Kilgore was able to improve in a short period of time.

Both on and off the court, Kilgore’s parents, Scott and Cindy Kilgore, have been there every step of the way.

“My mom and my dad they’ve always been behind me. They both give me pep talks all the time. If I’m in a rut, I turn to them and I say I need help and guidance, and they make sure to give it to me,” said Kilgore.

Scott, a photographer, volunteers his time to take photos of the team in action, more specially, pictures of Kilgore at every tournament and game.

Cindy played indoor volleyball. When Kilgore was young, Cindy signed her up for recreational sports including volleyball. Cindy would share her experiences with Kilgore about the game of volleyball. Sharing that special connection with her parents Kilgore admits she would have made it this far into Volleyball without them.

“She brings a lot of positivity where she is. We were involved with her recruitment process for certain parts but overall she [Kilgore] led the search and chose the colleges she was interested in based on major and teams. I admire Audrey’s drive and want to always improve and get to the next level,” said Cindy Kilgore.

During the latest season for the LHS Varsity volleyball team, Head Coach Poffenberger and the players ended with a record of 8-9.