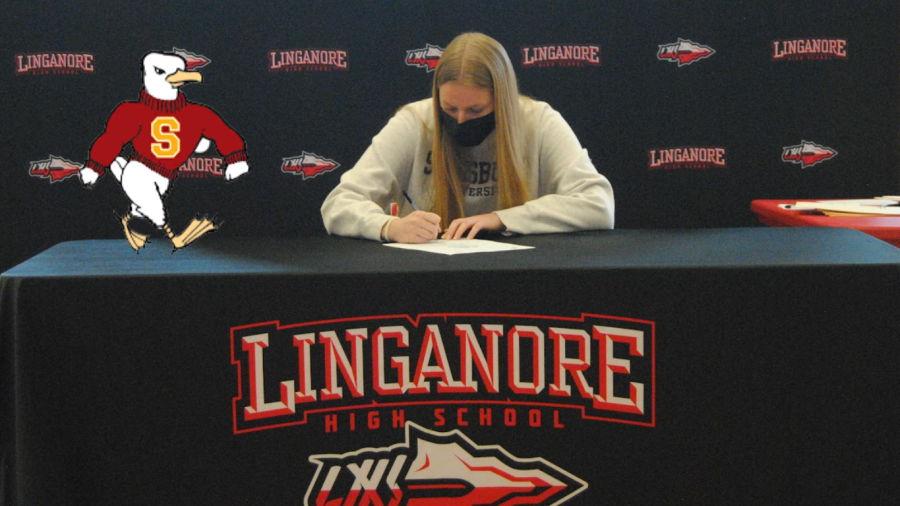 "[Grace] is the type of athlete every coach wishes they could have on their team." -Brooke Wilson.

On February 2, Grace Doy signed her National Letter of Intent to continue her athletic career at NCAA Division III Salisbury University in Maryland.

Doy has been a member of the girls varsity lacrosse team for four years and has been playing for 14 years.

She is a member of Maryland Select as well as the Renegades Lacrosse Club. Maryland Select is an elite program dedicated to the development of lacrosse players. Renegades is a recreational team located in Frederick, MD.

During the 2020-2021 women’s lacrosse season at Salisbury, the team had a final record of 20-0, winning every game with a total of 334 goals throughout the season.

Doy looks forward to the academic opportunities she will have at Salisbury, she plans to major in business administration. However Doy is nervous about playing at a higher level.

“I’m worried about the adjustment, playing in high school and playing in college are very different. I will be on a new team with new players who I haven’t had the chance to make connections with on the field so we don’t know each other’s playing styles, “ said Doy.

“Grace has shaped so much of our team dynamic, truly making Linganore Lacrosse a place where all feel welcome, encouraged, and heard. Grace encourages teammates with such ease, while also challenging them to be the best version of themselves. She does it with care, passion, and poise,” said varsity coach Brooke Wilson.

While Doy has wanted to keep playing lacrosse in college, but Doy’s father, David Doy, has be the constant push. He pushed her to continue working hard to get better and be able to play with a national championship team.

“Both of my parents have been my biggest supporters. From watching me at all of my tournaments and games to bringing me to practices and camps, they have pushed me and supported me through all my years of playing lacrosse,” said Doy.

Doy’s parents both graduated from Salisbury and she has family close by. Doy practically grew up at Salisbury University, the familiarly of it drew her in.

“I grew up visiting the campus. Once the coach contacted me I knew going to Salisbury would give me the opportunity to play high level lacrosse while also having everything I wanted,” said Doy.