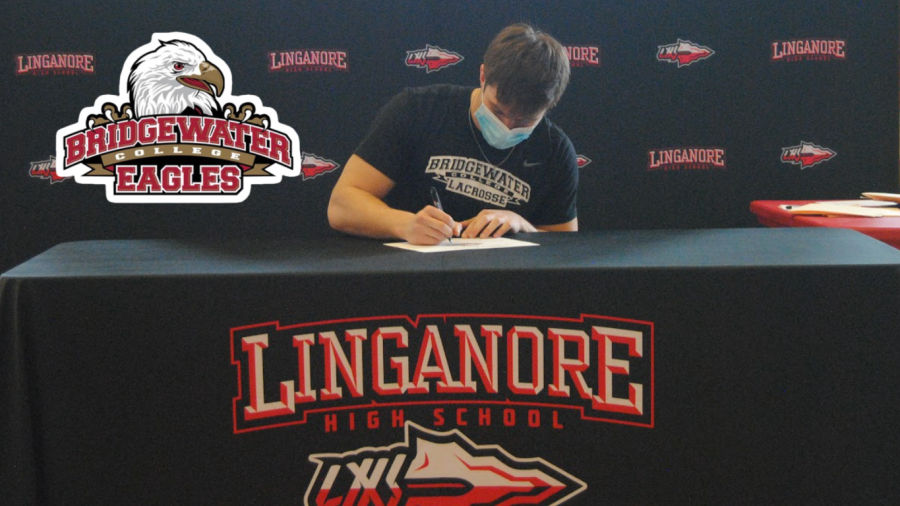 by Emily Lotito, Editor in Chief

On February 2, Dylan Kossoy signed his National Letter of Intent to play lacrosse at Bridgewater College. He will be majoring in Business and Finance.

Kossoy got into lacrosse because of his older brother Eddie, who used to play.

“I grew into it. My brother used to play and he had sticks all around the house. One day I just picked one up and since then I’ve been playing,” Kossoy said.

Kossoy has been playing lacrosse for 12 years. He has been on the varsity lacrosse team all four years of high school and has played for MDX Revolution Lacrosse for four years also. Kossoy’s position on the team is midfield.

“Lacrosse is constantly moving around. You don’t really stop moving and that’s why I like it more than other sports,” Kossoy said.

Kossoy had many colleges to choose from including Shenandoah University, Caldwell University, and then Bridgewater College.

“I chose Bridgwater because it was a smaller school and close to home. I’m a family guy, I’m the youngest of four. I wanted to be close to my family. I also liked the coach. He seemed like the coach who wants you to be the ‘best you.’ He seems like a nice and helpful coach and not a screamer coach, ” Kossoy said.

Dylan has a lot to offer Bridgwater’s lacrosse team according Thompson.

“Dylan is a super athletic guy with a great lacrosse combination of speed, strength, agility, and control on that hammer he has for a shot; a shot that is almost unstoppable, ” said Thompson.

In school, Kossoy hopes to have his own business in the future.

“I’m an athletic person. I work out a lot. I go to the YMCA in Urbana. After college, I definitely want to have my own business. Maybe something to do with fitness and/or working out,” said Kossoy.

Paul Kossoy is proud of how dedicated Dylan has been to lacrosse and admires his determination.

“When he has his mind set on something, he gets it done. We are very excited and proud of Dylan,” Mr. Kossoy said.

“He will be playing a big part in us becoming a state champion team again. That’s a lot to put on his shoulders but they are big enough to take it and to bear the weight,” Thompson said.