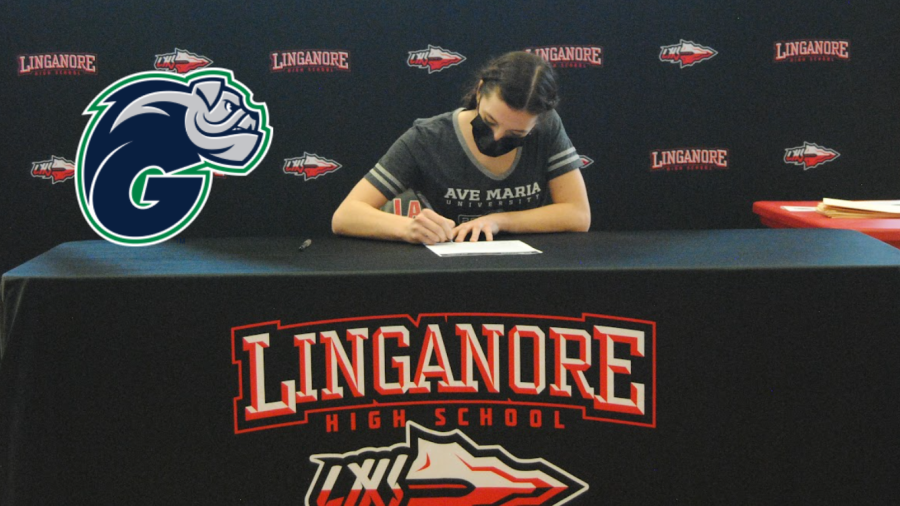 "Don’t let other people bring you down, don’t listen to the negative things they have to say. Brush it off. " - Maria Applegate

On February 2, Maria Applegate signed her National Letter of Intent to continue dancing at Ave Maria University (AMU) in Florida. Applegate is a four-year member of the Pom & Dance Team and is looking forward to being a Gyrene.

Applegate is the first student athlete from Linganore who has signed for competitive dance.

The AVU dance team performs at halftime during football, basketball games, and competitions in Miami, Louisiana, and Georgia.

Starting her dance career in elementary until middle school,she performed strictly at Center Stage until it closed. Center Stage helped Applegate improve her technique and eventually pushed her towards Poms. At Center Stage, Applegate specialized in lyrical and jazz.

Ever since Applegate was young, she’s only wanted to learn ballet. However her mother, Erica Applegate, against Applegate’s wishes, signed her up for Irish Dancing.

Applegate is a dancing enthusiast. She thrives on the adrenaline rush that comes with performing in front of large crowds. On the Poms team during the football season she walks onto the middle of the field every Friday night with confidence and a huge smile.

The smell of fresh salty pretzels, hearing students yell with pride at the top of their lungs and the feeling of unity is a part of what makes ‘Friday Night Lights’ so special. The poms routine during halftime turns a regular game into a Lancer memory.

“I love doing it for everyone. Every single time, your heart just starts racing and you’re getting pumped up for it. It’s so much with the huge stadium lights and the crowd focused on you,” said Applegate.

Applegate is grateful for her position on the team. It allows her to perfect her skills. However she tries her best to help others when it comes to learning the dances and certain skills.

Linganore has placed First in Short Pom ever since Applegate’s freshman year. In 2020, the poms team placed 2nd overall at the Mid Atlantic Poms and Dance Assocication competition.

“Maria has been an asset to the team not only being an integral part of football season as well as competition season,”  said Coach Paula Richardson.

“When I saw AMU and the campus I definitely fell in love with the overview of it,” said Applegate.

During a trip to AMU with her mother, she was able to speak to coaches and professors.  Applegate has yet to meet members of the dance team; however, she has no worries about the team dynamic or her place in the program. She plans to just be herself.

Applegate dreams of a nursing career, working in the emergency room.

“It’s just one of those things where I am so interested in, especially the aspect of being able to help others,” said Applegate.

Applegate knows what she has to do to balance academics and athletics.

There have been a few occasions when Applegate wanted to give up dance, but soon after, Applegate reminds herself, Dance is her motivation. Dance is what keeps her going.