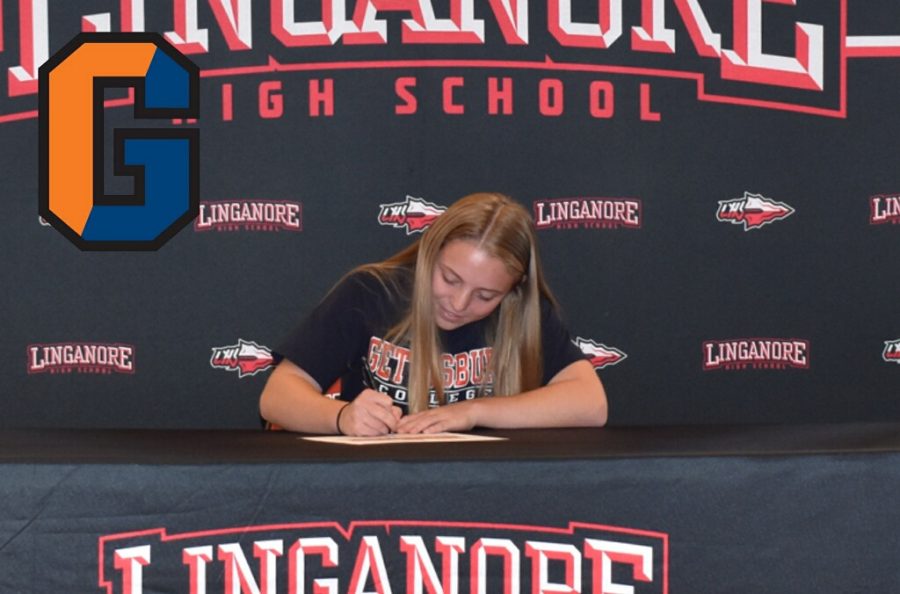 Camryn MacKay signs her National Letter of Intent to continue her softball career at Gettysburg College.

"She knows what she wants to accomplish and she is determined to go after it,"

by Emily Rice and Kiefer Ely

On November 9, Camryn MacKay signed her National Letter of Intent to play softball for the Bullets at Gettysburg College in Pennsylvania.

Linganore helped her learn how to play under pressure, especially during the state championship. The Heartbreakers prepared her to play against a lot of competitive players and bring her own athleticism the next level.

MacKay feels very prepared to play at the college level because of the amount of preparation her two teams have provided.

She toured multiple schools and met with coaches to narrow down her choices. Everyone has always told her, “when you know, you know.” That is how she felt when she stepped onto the Gettysburg campus.

Following her visit to Gettysburg, MacKay made her choice, and her other main options, Dickinson College and McDaniel College, dropped out of the running.

As soon as she talked to the coach there, she knew that the softball program would be competitive, and the team would be full of intensity.

Athletics and academics can be very difficult to juggle while being a busy college athlete.

When she attends Gettysburg, MacKay plans on majoring in Health Sciences.

“I plan on handling both athletics and academics by making sure to use all time outside of softball very efficiently,” said MacKay.

MacKay has been playing softball since she was 7, starting with T-ball at age 4. She is primarily a pitcher and outfielder, but she occasionally plays infield.

Since MacKay was younger, she has dreamed of playing college softball. Both of her coaches have pushed her to a much higher level than she could have reached on her own. This played a factor into receiving attention from college coaches.

MacKay’s parents are her biggest supporters and have always encouraged her to push further. To support McKay, they would drive all over the East Coast for her travel tournaments.

“I took her to any school she wanted to go visit. Her mom obviously did a lot of those travel trips for softball. I don’t know how much money we’ve spent over the years; it’s been a lot, but it’s been worth it,” said Camryn’s father Brad MacKay.

Head softball coach Andrea Poffinberger has also watched MacKay grow into the athlete she is today. MacKay has been a part of Linganore’s camps and programs since before she became a student at the high school.

During her speech, Poffinberger praised MacKay for her achievements.

“If I’m being honest, I could stand up here for an hour talking about all the great things that she’s done for our program and what makes her so special as an athlete,” said Poffinberger.

MacKay will start at Gettysburg next fall and will play softball for first-year coach Brooke Kalman. Kalman is excited to get the opportunity to coach MacKay, considering she is the only pitching recruit.

“The fact that we were able to win the first ever … state softball championship [for Linganore] makes her extra special,” said Poffinberger.