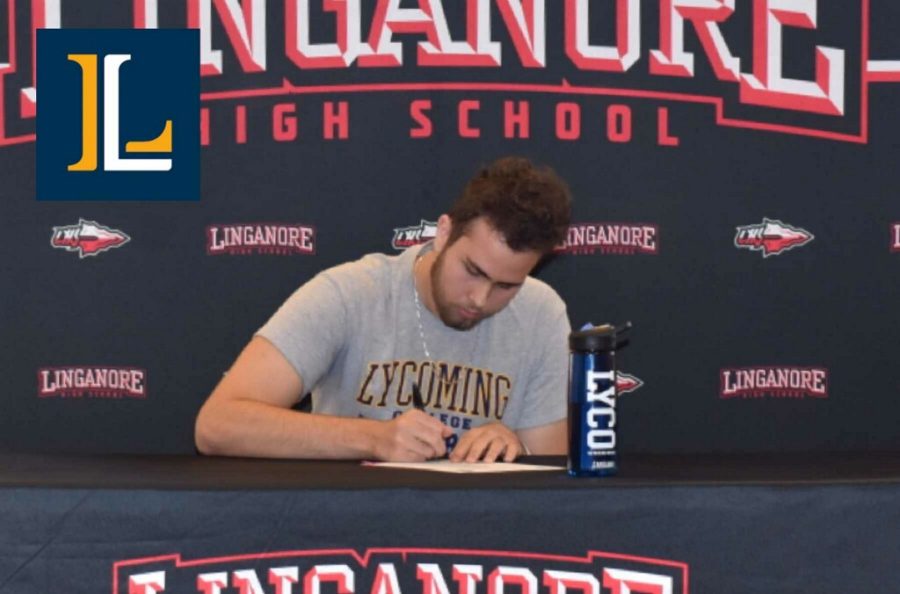 On November 9, Jalen Godette signed to continue his basketball career at Lycoming College.

Godette is a 6-foot-11-inch basketball player from Glenelg Country Day School who transferred to Linganore High School (LHS) for his senior year.

Godette plays center and wears number 50 on the court.

In college, he wants to major in astrophysics and music. He had received interest and offers from several schools, including Division 1 schools like Towson University.

Godette explained what he considered when making his decision.

“I wanted to go to a smaller college where I didn’t feel like just a number on the team. I felt wanted as a person at Lycoming,” said Godette.

With so many options for Godette, he chose Lycoming, a school with a little over one thousand students.

Mike McGarvey is the basketball coach at Lycoming and his interest peaked when he saw Godette playing basketball. He spotted Godette at a basketball tournament last April and approached him, beginning his recruitment to Lycoming.

Godette is an honor roll student with a 3.8 GPA. He received $30,000 in academic scholarships from Lycoming. With so much skill on the court and in the classroom, Godette has a lot of options going into the future.

“I know I don’t want to pursue basketball after college. I want to do something in music or astronomy, maybe as an astronomer,” said Godette.

Godette has always been supported by his family, especially his mom, who said she has taken him to every practice and game.

“I don’t think she’s ever missed a game,” said Godette.

Godette’s family has continued to support him throughout his basketball career.

“Everyone has seen greatness in him, he’s a really skilled player and I’m very proud of him,” said his mother.

Godette transferred to Linganore as a senior, so he has not yet played for Linganore’s basketball team. Despite this fact, head coach Tim Abercrombie has high expectations for Godette and his contributions to the team.

“We do have high hopes for Jaelen this season, he hasn’t played a game for us yet, but it is nice having the tallest human in Frederick County transfer to your school,” said Ambercrombie.

Godette is entering the basketball season this year as the tallest man on the court. Try-outs are next week, and he is hoping to get the starting job as center.