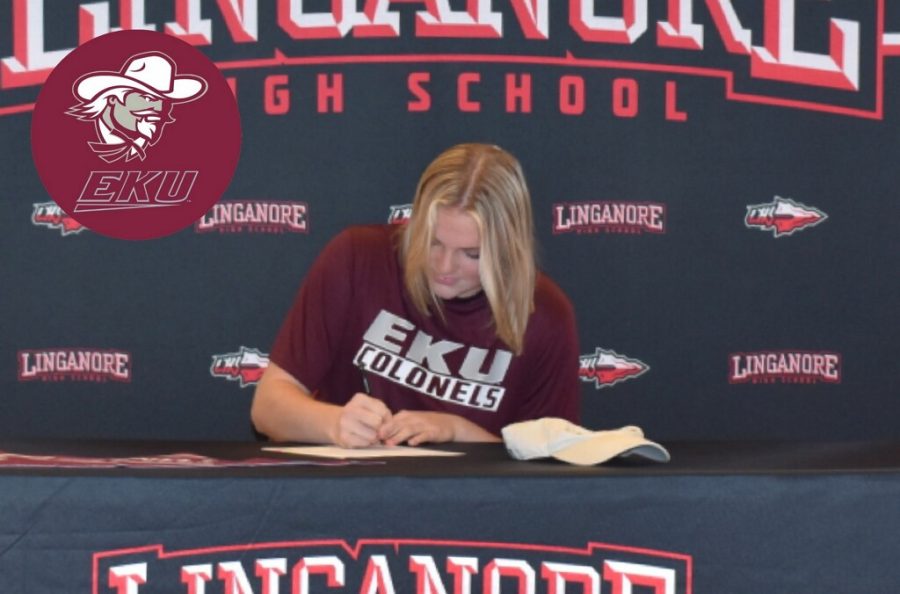 Stuart has been playing soccer since she was 7, so she has had a lot of time to inspire and drive her to play at the college level.

“From when I was 14, I knew I wanted to go on and play [in college] … I really pushed myself to achieve that goal,” said Stuart.

The environment you are playing in is just as important as playing itself. Despite her other options, Stuart knew where she wanted to go as soon as she started interacting with people at Eastern Kentucky University.

“When deciding which college I wanted to go to, I looked for a great environment and coaching staff … I did have other options, but I knew EKU was the place I wanted to spend my next four years with because of the people,” said Stuart.

Stuart is a team captain for Linganore High School girls’ varsity soccer and is going on to play Division 1 soccer (D1).

Division 1 is the highest level at which one can play college athletics, and the high level of competition may be nerve wracking for some. However, a hard worker like Stuart can manage her own stress.

“I’m not nervous playing at a higher level. I’ve worked so hard to get to where I am today … I think playing at this high level will only come naturally,” said Stuart.

Injuries are a big part of sports, but being injured is only a fraction of what athletes have to worry about while on the field.

“Getting hurt is a part of the sport. Sometimes they get hurt, sometimes they don’t,” said Stuart’s father Adam Stuart.

Goalkeepers, like Stuart, play the most specialized position on the field. As a goalkeeper, one needs to be tough and determined.

“She has a strong physical presence on the field. You can tell by her hard work. She stands out from everyone else when she’s working,” said Linganore girls’ varsity coach Michael Heller.

While Stuart is a brick on the field, she is known for her likable personality off the field.

“I’m going to miss her personality, relationships that we have, and just talking to her about different things other than soccer,” said coach Heller.

Stuart is graduating at the end of the fall semester and will start EKU next fall in 2023.

She will be majoring in Biomedical Sciences with a Pre-Medical concentration. She hopes to one day become an athletic trainer or a sports medicine physician.