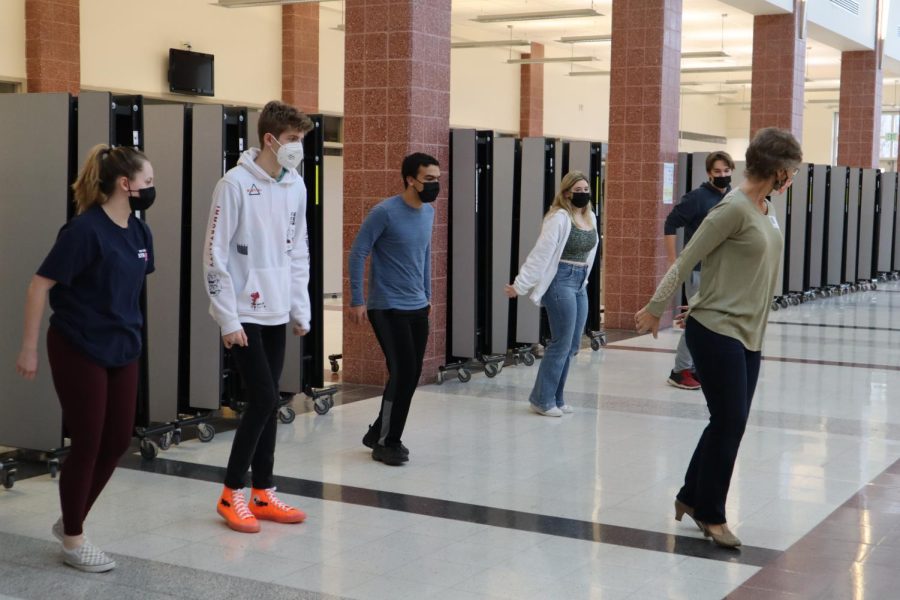 Contestants along with their Dance Partners pay close attention to Mrs. Linda Sanders.

Mr. Linganore returns with “Man Behind the Mask”

by Madeline Hull, Editor In Chief

Do you have what it takes to be Mr. Linganore?

On February 7, the contestants of Mr. Linganore attended their second dance rehearsal before the contest on March 5.

All the contestants had to choose a character to become that fits the theme for the 2022 annual contest “The Man Behind the Mask.”

Two years ago, in the most recent Mr. Linganore competition, Braden Weinel stole the show as Ferris Bueller, fitting the theme “Men of Vision.”

Some of this year’s contestants’ introductory characters include Spider-Man, Captain America, and Darth Vader.

Mr. Linganore serves two purposes: the First as a fundraiser for the LHS Renaissance Academic Awards Program and second as a captivating and entertaining show for the audience.

“I remember watching the Mr. Linganore contest my freshman year and I just found it so interesting how big of a production it is. So many people get involved and it’s a fantastic way to connect with the community. That’s why I choose to partake in Mr. Linganore my final year of high school. Plus the idea of it is really fun, It’s a good way to end my high school career,” said Joshua Parker.

After spending hours perfecting the dance, choreographer Linda Sanders, a retired FCPS physical education teacher, believes the gentlemen will be ready the night of March 5.

Part of the Mr. Linganore contest is a talent portion where the contestants show off dancing, singing, or a skit.

“I don’t want to spoil anything. You have to attend the contest on March 5, but I will say it relates to my character, Spider-Man,” said Parker.

This is an event you don’t want to miss. Want to see the contestants show off their moves? Come show your support in the auditorium on March 5! Doors open at 6:30 and the event starts at 7 p.m. Tickets for the show can be purchased from any contestant (in late February) or the night of the event.