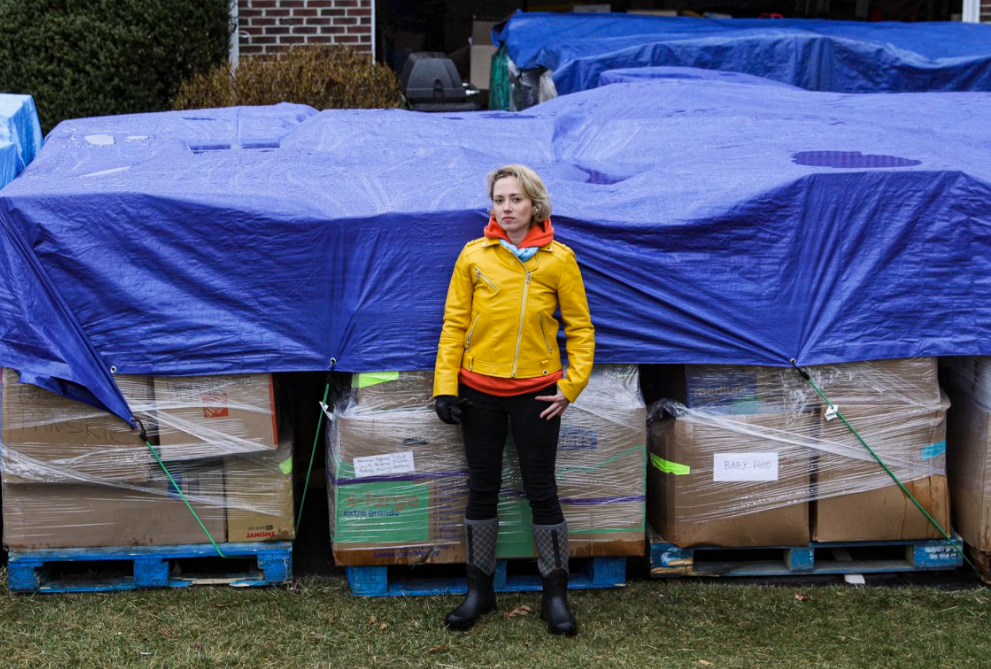 One woman and hundreds of supplies. Annie Raush-Gernet stands in front of the donations collected in her front yard.

It's something inside of Ukrainians. . . Throughout history Ukrainians have shown their strength and resilience, and this time it's really confirming how they stand together in a time of need. It's really something within the nation that unites us. - Annie Raush-Gernet

by Caroline Hobson, Editor in Chief

In just 48 hours, Annie Raush-Gernet received over 4,000 packages from across the nation. Amazon trucks were lined up in a caravan down her street.

The Linganore/Mt.Airy family partnered with Alyona Oborn, a woman in Idaho, to create an Amazon list of supplies for those affected by the war in Ukraine. The list consisted of everything from medical supplies for those on the front lines, to clothing and feminine hygiene products for women and children struggling with the brutal consequences of war.

The two women, thousands of miles apart, met through a Ukrainian-American Facebook group. They began to message in the group and felt urgency to help. Within a week, the mutual idea to help their friends and families back home became a reality.

“I’m a local photographer, and I just shared it out on all of my platforms on social media and then a lot of people shared because everyone was so shocked at what was going on and wanted to help,” said Oborn.

We are a team of two, but we have never seen each other in real life. We were both raised in Ukraine and have the same goal,”

The Ukrainian women have seen family and friends’ pictures of their hometowns’ devastation. Anxious and feeling isolated in the U.S., the women knew they had to do something to help.

“I have family there still, and I have friends there. I could see things first hand. . . That’s my country where I grew up. That country is what made me who I am today, so of course it was devastating to see my friends writing that they were being bombed. I read the best way to work with depression or anxiety when you are anxious is just to try and help the situation. So that’s exactly what I did. I created something to help,” said Oborn.

Together, these women created an Amazon nationwide shipment to be delivered to Raush-Gernet’s Mt. Airy home. Raush-Gernet then organized over 100 volunteers to help sort, stack, and wrap the supplies to ship them.

“She [Oborn] put my address in there and that was good because we had a space. We never thought that this many packages would arrive in such a short period of time. The Amazon trucks. . . just never stopped coming with supplies,” said Raush-Gernet.

She shared that some of the priority items included medical supplies, men’s thermal clothing, socks, underwear, nonperishable foods that are easy to cook, and a lot of hygiene products especially for women.

She describes the mountain of diapers they received as twice as high as her husband’s Toyota truck.

The family had to put a hold on accepting donations because the amount of supplies to sort  was overwhelming. Even as packages continue to trickle in from their first list, the women are setting up for future, more sustained efforts to get supplies to Ukraine.

Raush-Gernet will have several shipments of relief packages due to the amount of supplies received in such a short period of time. The first shipment was medical supplies that were sent to the Department of Health in Ukraine. The second shipment of supplies consists of 20 pallets filled with humanitarian aid to benefit women, children, and those not on the front lines. The second shipment landed in Poland early March 17 and is awaiting distribution to Ukrainian citizens.

After the pallets are received in Poland, they will be driven to Ukraine and distributed. However, with the number of refugees flooding into Poland and neighboring countries, it takes days to get anything past the Ukrainian border and into the country.

“So the trucks are from Ukraine post offices. . . To cross through Ukraine it normally takes two days, but because of the roads and all the people fleeing to Poland it is taking three, four, even five days for people to get into the center of Ukraine,” said Raush-Gernet.

The women want to ensure that the citizens of Ukraine are actually getting the supplies they need through an efficient route before they can open a second list for donations. The pallets have GPS trackers in each pallet to follow the supplies’ journey.  Junior Dimitri Raush-Gernet is in charge of the technology, including the  drone footage he supplied for news organizations.

“The project started out small, the idea was to advertise support for Ukraine and ship whatever we received. It quickly turned into a lot more. There is a general goal to help as many people as we can. As of now, we do not have a specific goal(like 100,000lb) because we do not know what to expect after the unexpected amounts of donations that we are receiving,” said Dimitri Raush-Gernet.

With Dimitri Raush-Gernet’s technology skills, the family was able to successfully track their second shipment and see exactly where the supplies will go.

It’s really like the whole country became my family you know?”

Annie Raush-Gernets mission is not to provide relief just once. She wants to work monthly to aid the years of rebuilding that Ukraine can expect. She wants to help those not directly on the front line and push deep into the country where people need supplies the most.

The magnitude of the need is hard to imagine.

“I’m making a list of places that are in need. I mean it sounds sad, but, unfortunately, not everyone gets humanitarian aid. Only the front line is a full priority, but we still have churches that have a lot of refugees. We have some schools that are full of refugees, and those places are trying to get together and send us requests. So I’m really more focused on those places that cannot get as much as the front lines, that is one part of my mission,” said Raush-Gernet.

Raush-Gernet’s plan to help for years to come is sustained by the support of their Mt. Airy community. With the help of over 100 volunteers, they were able to get the first 80 pallets ready to ship in three days.  Their efforts included scavenging locally for pallets, buying rolls of plastic wrap and renting a forklift.  Many volunteers are eager to return for the next round of presorting, packaging, and heavy lifting.

“There were 30[volunteers]  the first day. The second day there were probably about 60-80 volunteers in two shifts. I started messaging people in my neighborhood and in the community, and, just like that, people started coming to help. I was getting up to 300 messages a day from people, and still people are calling from different places that want to help. . . collecting was just the first part really,” said Raush-Gernet.

She is currently working with members of the Ukrainian Parliament to address the travel route and distribution of supplies. Collecting the materials was “easy” compared to working on shipping and delivery. This involves the coordination of storage, airplanes and trucks.  For this stage, she has created a GoFundMe page to raise money.  Twenty pallets of supplies takes about $10,000 to deliver.

“You cannot just simply do something as an individual or a few volunteers, it really has to be a nation helping, which is why I’m in contact with members of parliament and big companies in Ukraine,” said Raush-Gernet.

Her mission has touched more than just a few in Ukraine. Raush-Gernets supplies are also being sent to refugee centers along the borders of Ukraine and Poland to help aid with the immense travel of Ukrainian citizens escaping war. Some of the feminine hygiene products, nonperishable foods, and warm clothing have been sent to the centers to distribute.

Raush-Gernet said that there is also a need for supplies for those on the front lines helping prepare beds, food, and shelter for soldiers.

“We need stuff for people on the front line that are doing all the other jobs, like women who are cooking. There are so many women who are cooking and they are also there on the front line.  So many are cleaning and preparing the welcoming centers for soldiers. So we really want to support the soldiers and everyone who is helping, if they are hungry, if they are tired, if they have any simple things to do, they would not be able to fight. Which is why it is crucial to support those who are supporting the soldiers right now,” said Raush-Gernet.

Another driving factor of the women’s mission is the personal connection so many feel when donating to the Amazon link or GoFundMe.

“The hard part is that people want to help but they don’t have the connections and they are nervous about sending money or supplies somewhere they don’t know, but when its local and you know the family personally, it just makes it easier and more reliable to donate,” said Oborn.

The simple mission to help those in need has grown into a lifetime of support for Ukrainians. The two women have made an impact from miles away, and with every setback, they find new ways to conquer each challenge.

If not me then who?”

While they have hundreds of community volunteers behind them helping sort and package materials, they are still in need of funds to send out all the supplies. The women have been running the show themselves since day one, and have received little support from major non-profit organizations in the US due to the size of the project.

So for now, it is up to Raush-Gernet and Oborn to keep moving forward, pushing their supplies into Ukraine, and just providing support for their home country, one step at a time. They are a two women team, and will continue to find ways to support even from miles away.

If you would like to donate and help Raush-Gernet and Oborn raise enough funds to ship their next thirty pallets to Ukraine, please click on the GoFundMe here to donate.