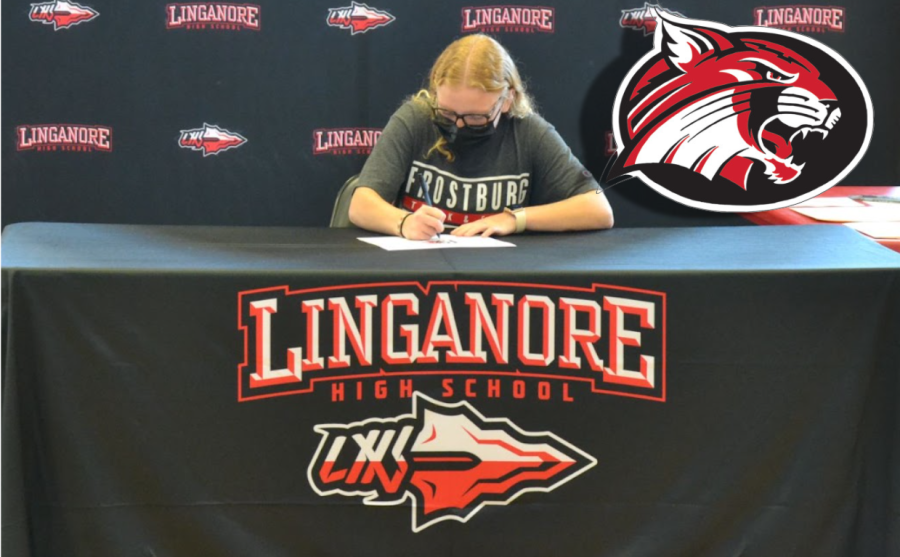 by Alexa Waser and Leeda Djourshari

Arneson has prepared herself for college-level athletics by taking part in the indoor and outdoor track team while also taking part in varsity soccer.

Arneson’s coach, Jason Shipley has seen this hard work pay off on the track and spoke about her at the assembly.  “When I think of drive and perseverance, I think of Payton Arneson,” said Coach Shipley.

Shane Brookshire, head coach of Frostburg track and field, approached Arneson at counties, regionals, and even states. Arneson appreciates Brookshire’s involvement throughout her recruitment process and values the dedication he offers to potential new team members.

Maria Ferguson, an alumni at Frostburg, ran the 100 meter dash with a record-breaking 12.03 seconds. Arneson’s current record is slower by only .72 seconds.

“I’m not nervous. I’m more excited than nervous,” said Arneson. “The school part scares me more than the running.”

“My biggest concern is her being able to manage athletics and academics,” said Arneson’s mother.

Despite these challenges, the Arneson parents are confident in their daughter’s determination and willingness to succeed, and know that she will not disappoint.

Arneson also has a personal connection with the college because Frostburg has been a family tradition.

“My whole family went there, and I wanted to keep that going,” said Arneson. “And I like that area, that it’s close by.”

Arneson’s parents are excited that Frostburg is close enough to allow them to travel to visit their daughter as easily and as often as possible.

She will major in wildlife biology.