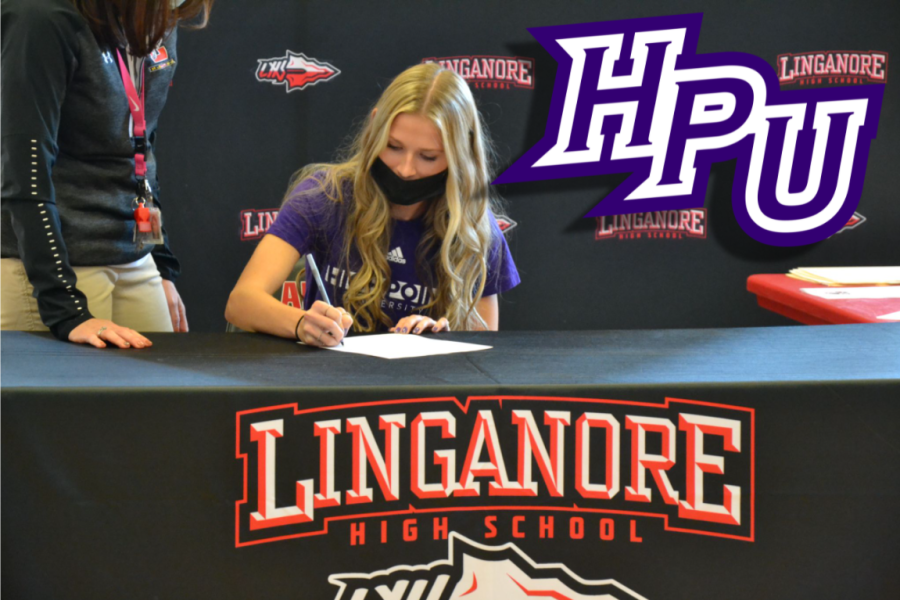 Mikayla Moxley becomes a Panther as she signs her National Letter of Intent to run Track & Field at High Point University.

by Emma Henry and Daryn Rowse

Mikayla was just 8 years old when she joined “Lightning Running Club.” She soon discovered her love for track and field. Ever since that day, she has honed her skills. On Novemeber 10 Mikayla Moxley signed her National Letter of Intent to run track at Division I High Point University.

Moxley believes she can bring skills to High Point University, including her mid-distance times and ability to “bring the middle ground of the team together.”

Linganore’s Track and Field Coach Steve Musselman said in the Frederick news post, “Determination, willing to learn and accept challenges and giving a strong effort in everything she does.”

Coach Connor said, “Mikayla is a two time 800 Meter State Champion. She is also on top of the LHS performance list

High Point University offers everything she is looking for, including academic majors and motivational coaches and teammates. Moxley has an interest in forensic psychology.

“Ever since she started, she’s been improving rapidly. She got me into joining the track and field team, even though I’m probably not going to be as good as she is,” said Mikayla’s brother Andrew.

She got me into joining the Track and Feild team”

Moxley said, “I’m really excited to have the opportunity to practice with a coach that has lots of experience with track and I’m also looking forward to working with a team that has other students who share the same athletic goals as me.”

After graduating college, Moxley said “I hope to get a job with a law firm where I get to determine if witnesses are fit to stand trial.”

When she finally signed you could see the excitement in her eyes to step forward into the college world. Her parents and family had the opportunity to be able to be by her side during the whole process and see her sign to her dreams.