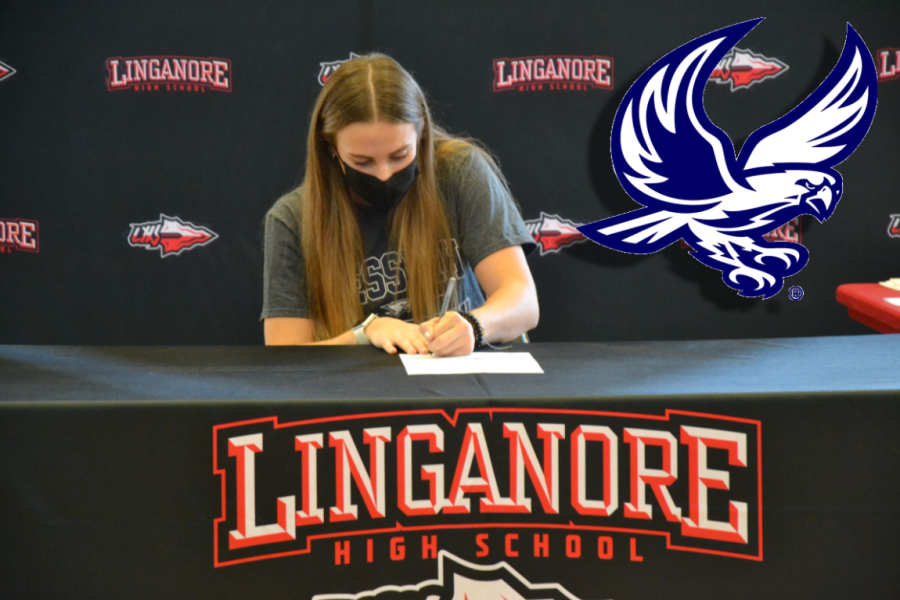 by Brynne McKinney and Rowan Grob

“Kelli has been a part of the team since her freshman year when we won the 2019 Regional Championship against Manchester Valley. As a freshman, Kelli was batting a .385 average, which is very respectable. Her main roles on the field include pitching and covering first base,” said varsity softball coach Andrea Poffinberger.

“Immediately following her freshman year, she made it a point to work diligently on her batting, both in season and off season, and really stepped it up her junior year, especially after losing her sophomore year to COVID. I know Kelli is already focused on beating her junior year batting average, and I have no doubt she has been is the cage multiple times a week preparing to make her senior year her best season yet,” said Poffinberger.

“Having versatile athletes like Kelli is certainly a major benefit from a coaching standpoint,” said Poffinberger.

Durbin is already preparing to make this last season her best.

If you know Kelli, you know she is a determined young lady who wants to succeed and enjoys the game of softball”

“My decision was based off of the coaches, and the Messiah campus was really nice. I chose Messiah because the girls on the team were so welcoming, and I loved the campus and the professors at the school,” said Durbin.

“We were trying to let her find the colleges and let her make the decision,” said Duane Durbin, Kelli’s dad.

“We tried to have her look at colleges nearby”

While at Messiah Kelli plans on studying to be a pediatric orthodontist.

Messiah has ranked number 23 in Regional Universities North, number 24 in Best Undergraduate Teaching, as well as number 11 in Best Value Schools according to US News.

“I’m gonna be a student first and use the student to athlete hours,” said Durbin.

Kelli has very big plans and its great that she has an amazing support system.

“My parents and travel and high school coaches pushed me to go and play college sports. My biggest supporters are my parents,” said Durbin.

Duane and Tammy Durbin can’t wait to go to Kelli’s games and to visit her.

“Absolutely, we wouldn’t miss her games for anything,” said Tammy Durbin.

Durbin’s parents are very emotional about her leaving for college.

“I’m sad and I’m really gonna miss her not being at home,” said Tammy.

“I’m happy for her, but sad for me. It’s gonna be weird not going out to practices or local games,” said Duane.