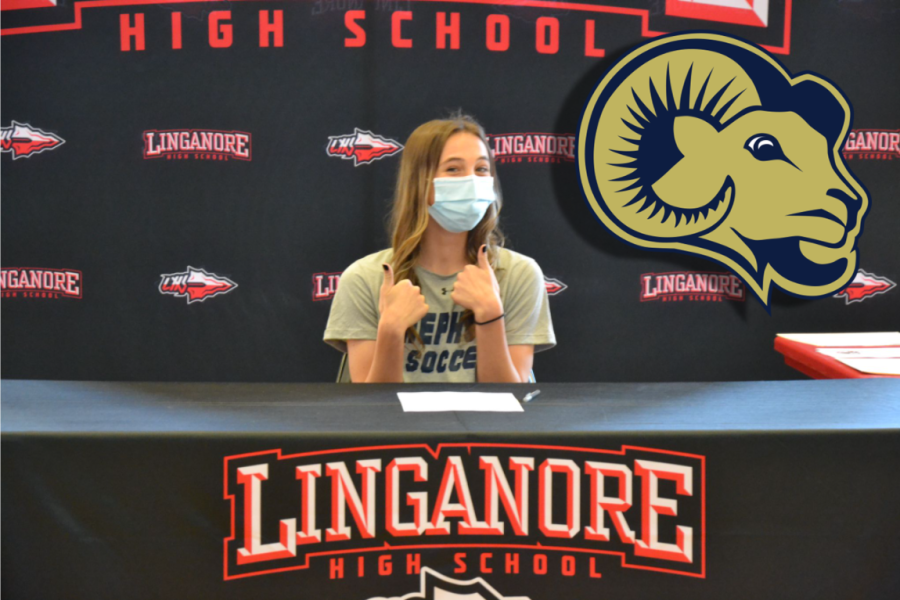 Josie Beezel becomes a Ram as she signs her National Letter of Intent to play Soccer at Shepherd University.

by Matt Nyandjo and Christian Williams

On November 10 , Josie Beezel signed to play soccer for the Division II Rams at Shepherd University in West Virgina.  Beezel is ranked #6 in all of Maryland and is ranked nationally at #422 at the midfield position.

In eleven games during the 2021 season,  Beezel put up six goals as a midfielder. She has also been named “player of the game” in several games this year like the game against North Hagerstown which she led her team to victory. Beezel previously played for club team,  Baltimore Armour which is a nationally ranked team.

At the signing day, Beezel said,  “I chose to go to Shepherd University because they had the most communication with me, and I like the overall environment.” She also said it is very convenient for her to go to Shepherd because it was very close to home and was not as far away as her other options.

“I started playing soccer when I was about 5 and we were too young to understand. Around 10, I joined my first club team,” said Beezel.

“I invited the head coach to come out to watch me play. After that game, he emailed me and started exchanging feedback until he offered an invitation to play for the school!” said Beezel.

Beezel knows that the college level of play is tough, “I’m definitely nervous to play at the higher level. Of course it comes with more pressure and responsibility, but it’s nothing I won’t be able to handle. I know I will be comfortable with my new teammates,” said Beezel.

Jamie Beezel expressed her thoughts about Josie going off to college.

“I have mixed feelings about Josie going off to college. I am excited for her to experience the next chapter of her life, but of course will miss seeing her in person every day,” said Mrs. Beezel.

“I was pretty involved in helping her choose a college.I assisted her in video footage and editing of her soccer highlights in hopes of getting recruited. We researched the academic side of things together and made sure she would qualify…We visited a few campuses together, attended some college camps to get in front of the coaches,”said Mrs. Beezel.

Coach Paige Pohopin praised Beezel for her efforts and talents on the team during her signing day speech.

“She was the most versatile and decisive player…She’s always been a leader, a team player and an all around athlete,” said Pohopin.