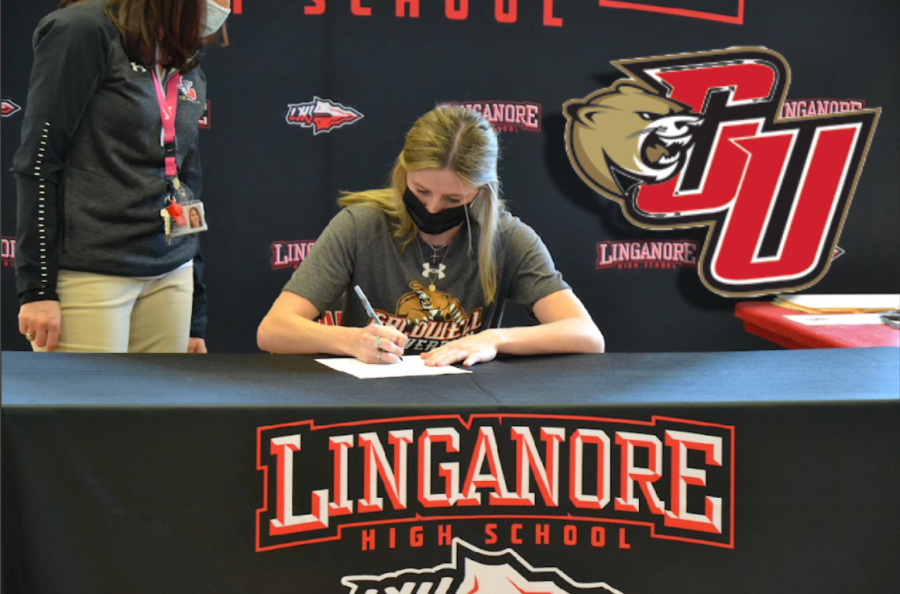 Delaney Ridgell becomes a Cougar as she signs her National Letter of Intent to play softball at Caldwell University.

by Makyla DeVries and Audrey Kilgore

On November 10, Delaney Ridgell signed her National Letter of Intent to play DII softball and further her academics at Caldwell University.

Ridgell has been playing softball for over seven years. Her dedication to improving is clear with the impressive thirteen camps she has attended. Bo Vicendese, her travel coach, has watched her grow on his Maryland Chill 18u team.

Vicendese said, “She has shown me that anything is possible through diligence and hard work. I have worked with her since she was very young and she consistently worked hard and was driven to improve herself. There aren’t many diligent, hard working athletes like her anymore. She’s the type of player that makes coaching fun and fulfilling!”

Ridgell is  a major contributor to the varsity softball team for all four years of her high school career. In her freshman year alone, she earned recognition for First Team All Central Maryland Conference, Second Team All Frederick County (Frederick News Post), the Coaches award, and was a player on her competitive Maryland 3A state semifinalist team. She plays catcher, third base, and first base, but she is also utilized as a designated hitter for Linganore.

“She has been absolutely the best catcher I have ever coached. Apart from her skills, she is also a born leader. She leads by example,” said Vicendese.

One of her most memorable achievements was leading the Linganore softball team to victory in their 3A regional championship in 2019. Ridgell is undeniably one of Linganore’s top hitters, which The Frederick News-post verified.

Ridgell began considering Caldwell University after being singled out at a tournament in Massachusetts in 2019. She also took a liking to the size, location, and overall atmosphere of her future school.

“I verbally committed in June 2021 after going to unofficial visits and falling in love with the school,” said Ridgell.

Andrea Poffinberger, Linganore softball and volleyball coach, has watched Ridgell grow as a dual-sport athlete and a leader in both sports. Poffinberger believes Ridgell’s work ethic and intuition have made her an important asset to her teams, and she has observed the effects of Ridgell’s passion and athletic drive.

“Being a two sport athlete and excelling at both says a lot about Delaney. She is coachable, determined, and has always had a growth mindset,” said Poffinberger. “She is also an excellent leader on and off the field and court, always leading by example.”

Dean Johnson, the head Caldwell softball coach, has been coaching at the university for 28 seasons and is ranked as one of the top 20 softball coaches for NCAA Division II. Ridgell is looking forward to playing for Johnson. His effective coaching style reminds her of travel coach Vicendese’s approach.

Vicendese has been a significant figure in Ridgell’s development and has played the most important role in preparing her for college athletics.

“All the coaches I have had from 10u to 18u have made an impact on making me better prepared for college. There is a coach though that I have been with and taken hitting lessons from since I was nine,” said Ridgell. “I joined his 18u team at 13, and he ultimately brought me to being ready and prepared for college softball. I owe everything to him.”

Ridgell said, “Being so young on an older team allowed me to watch other girls go through the recruitment process and go to college to play. I wanted to be just like them. It is an amazing feeling to be able to root them on at their colleges and now have them be able to do the same for me next year.”

Ridgell’s parents, Bryan and Jackie, are definitely her biggest fans.

“Softball, unfortunately, is a game of failure, which can be disheartening, but my parents have always been there for me and cheered me on no matter what,” said Ridgell.

Her parents share mutual feelings of pride in her hard work and accomplishment. They have full trust in her judgement, as Ridgell took on the bulk of the recruitment process and chose her college independently.

“We weren’t involved at all. She was the driver. The coach saw her play and recruited her, and it was really her choice,” said Bryan Ridgell.

“We’re filled with emotions. We’re excited for her future, but we’re certainly gonna miss her. Since she’s an only child, we’re trying to figure out what to do. But we know she’s going to do great things. The hardest thing as her father is missing watching her play because we’re not going to be able to make every college game.”

Jackie Ridgell expresses her love for and closeness with her daughter as well.

“What will I miss the most?” she said. “Her being around all the time… she’s my buddy.”

Caldwell is a private university in New Jersey that aims for students to “thrive as critical thinkers, be able to appreciate diverse cultures, and acquire moral and civic awareness.”

“I feel like my college will give me the opportunity to pursue the education that I need while also getting to further my athletic career that I have worked towards for as long as I can remember,” said Ridgell.

After college, Ridgell hopes to attend law school or to pursue a career in political science. Undoubtedly, with the support of her coaches, teammates, and friends, she will be able to find success at Caldwell and use the next four years to excel at her craft – and whatever she puts her mind to.