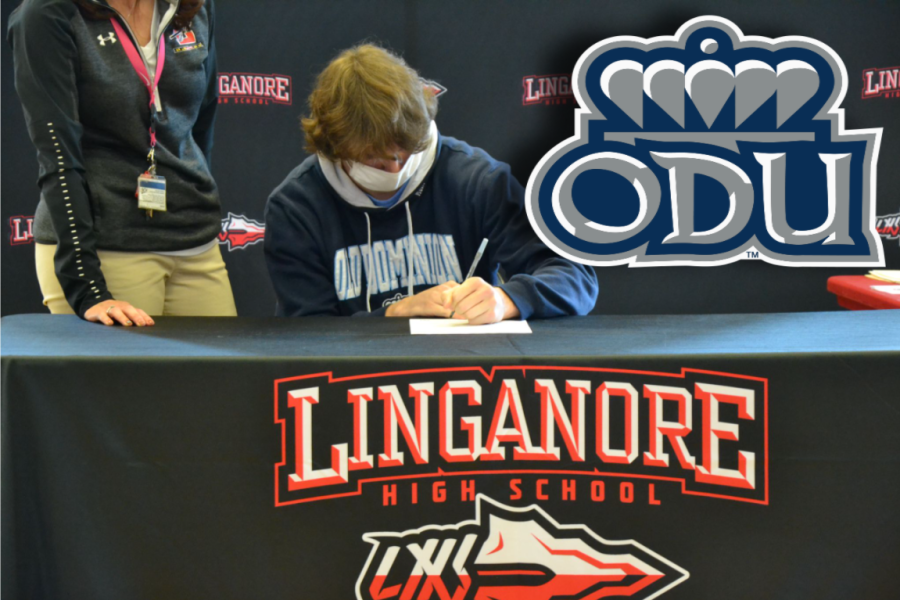 Ben Moore becomes a Monarch as he signs his National Letter of Intent to play Baseball at Old Dominion University.

by Brayden Gregory and Eric Simonson

On November 10, 2021 , Benjamin Moore signed for a full ride to play baseball for the Monarchs at Old Dominion University in Norfolk, Virgina. The Old Dominion Monarchs baseball team is a NCAA Division I college baseball team that competes in the C-USA East Division. Pitcher Moore hasn’t given up an earned run since May 14, 2019.

He has been playing on Varsity since freshman year. Moore is currently a 7-1 starter for Linganore. In last year’s season, he helped the team through many games, most notably against Oakdale. He pitched 6 2-3 innings in that game, but due to pitch count, Kai Hardesty came in to record the final out as the duo combined on a no-hitter game.

He also helped the team by going 4-0 during the regional championship against TJ and led the team in home runs.

Moore has played baseball almost all his life, starting in elementary school. Other than the high school baseball team, Moore has most recently played on the Frederick Hustlers, since freshman year.

I could not be more proud… He might go down as the best Linganore baseball player of all time…I know you will be very successful.”

When it came to college level baseball, Moore was being recruited for other schools including, but not limited to, University of Maryland, Virginia Tech, University of South Carolina, North Carolina State, Wake Forest, and Pittsburgh.

“I spent a lot of time talking to coaches, trying to figure out who would be the best fit for me to play for. I did a lot of research on schools and program history, “said Moore.

He said, “The thing I love most about ODU is the location of the school. It’s the perfect distance from home. It’s right on the water, giving an amazing view and is right by Virgina Beach.”

At ODU, he plans to major in business.

“After college, if all goes right, my plan is to enter the draft for MLB and make a run at playing professionally,” said Moore.

Moore is grateful for his mom and all the dedication she has put alongside him for where he is now. Moore said, “My biggest supporter has definitely been my mom. She’s dedicated so much of her time driving me to practices, traveling all up and down the East coast for tournaments, and watching me play for the past 11 years. I wouldn’t be here without her.”

“[I’m] ridiculously proud of him, he’s worked really hard to get here. I think he will be really successful in his future,” said Kimberly Moore.

Last season for ODU, Head Coach Chris Flinwood led the Monarchs to a winning record of  44-16 and C-USA champs, improving from their last full season in 2019 with a 35-21 record.