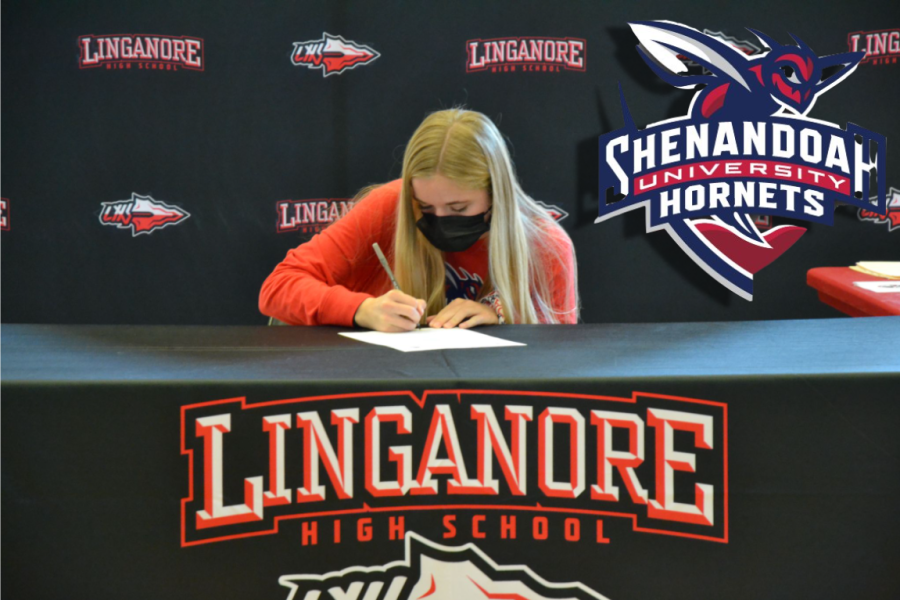 Alyssa Grunwald becomes a Hornet as she signs her National Letter of Intent to play Soccer at Shenandoah University.

Varsity soccer player at Linganore Highschool Allyssa Grunwald shares her reasons for signing to attend and play for Shenandoah University.

by Kiefer Ely and Sophia Hopkins

Allyssa Grunwald has been a star player for varsity soccer team for three years, and played on JV freshman year. She switched from being a defender to a midfielder this season and is ranked as the 6th best girl’s Varsity Soccer player in Maryland, and the 422nd in the United States.

“Alyssa quickly earned herself a starting position most of this season with the amount of hard work she put into this season,” said Coach Paige Pohopin, representing herself and Mr. Mark Lastova.

Grunwald was recruited at a soccer ID camp and approached by one of the coaches for the Shenandoah Women’s soccer team. At these events coaches train with players and evaluate possible options. She took some time to think about her other options, but decided that Shenandoah University was the right fit.

On November 10, 2021 Allyssa Grunwald signed her National Letter of Intent to play soccer for Shenandoah University. Located in Winchester, Virginia, this university competes in the Old Dominion Athletic Conference (ODAC), and is a Division III school. In addition to sports, Allyssa chose this school because it has the best opportunities.

She started playing when she was four and has always had a passion for the sport. Allyssa believes that her club team [FC Frederick] has been essential for her growth.

“I definitely think my club team better prepared me for college soccer because everyone on the team has the same goals as you (which is to play college ball) so everyone’s passion and intensity is always extremely high,” said Grunwald.

Supported by her family, she has continued to improve and push herself to do better.

“My family is my biggest supporter. They have always supported my dreams and anything I am passionate about. They always push me to be the best version of myself and never let me give up on things they know I can overcome,” said Grunwald.

Allyssa plans to major in business with a focus on sports management. After college she hopes to manage a sports team, and hopefully make her way up to a professional team. She plans to join study groups to help stay on top of her school work.