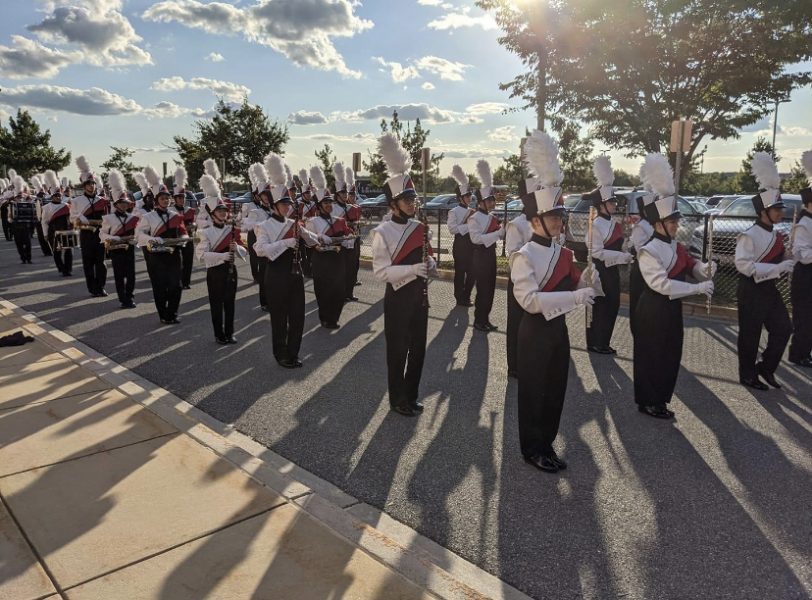 How does the band achieve perfection? It’s simple, dedication to each individual detail. Standing in formation, marching with a roll step, and attending hours of band practice are just a few key steps that help them reach greatness. (Courtesy of Kevin Lloyd)

How does the band achieve perfection? It’s simple, dedication to each individual detail. Standing in formation, marching with a roll step, and attending hours of band practice are just a few key steps that help them reach greatness.

. . . not if these band directors have anything to do with it.

On fall Friday nights, a flood of musicians in black and red with plumed shakos (hats) bustle around the performing arts wing in preparation for a football game. Later, the band marches in rhythm to the stadium, crowd cheering in anticipation. Stand tunes further intensify the spirit in the student section.

Now, imagine all of that was gone.

Due to COVID-19, younger musicians are not getting a regular opportunity to see their future as musicians, and high school marching bands will likely be much smaller in four years. Band directors in Frederick County Public Schools (FCPS) are brainstorming ways to combat this problem to get more students with instruments in hand.

During a normal season of marching band, the Lancer Band has anywhere from 100 to 120 members. This year, the number is around 95. This nearly full enrollment is not shared at every school in the county and is the result of the band director’s vigilant recruiting throughout online learning. Based on current projections from FCPS, band numbers in four years will drop precipitously.

Kevin Lloyd, director of the Lancer Marching Band, is disappointed when he considers the future with fewer students. However, he believes that there are ways to alleviate this problem.

“I’m planning to try to do some additional outreach this year to our middle schools and elementary schools, depending on what I can be allowed to do by our administration and by the administrations at those schools,’’ Lloyd said.

A local Duet With Music employee noted that the rentals at their location in Frederick has declined as well.

Involvement has been pretty low throughout the past two years due to little motivation and reward in the music program.”

“The number of instrument rentals has decreased throughout the past two years due to COVID restrictions. Involvement has been pretty low throughout the past two years due to little motivation and reward in the music program. Students did not want to take band and rent instruments because there was no way to play in concerts, connect with peers, and have fun in person,” said the employee.

In the past, there have been events at which the rising freshmen can come to the high school and experience a home football game during the season. Lloyd is still planning that this year but is also planning to do some extra events to make up for lost recruiting time.

“I’m hoping to take some small groups down to perform for kids–maybe at lunch times or assemblies and get in to talk to classes, putting more things out on FindOutFirst [the county messaging system], and things like that,” said Lloyd. “I think that we probably are anticipating that our numbers are going to go down, but I don’t want to just give up and assume that’s going to happen. I think we need to try to recapture some of the kids that we’ve lost during this process.”

Losing the rhythm and getting back into the groove

When school began fully online in 2020, band directors across the country struggled as they tried to figure out how they were going to run their programs. Recruiting new members was harder than ever, and prospective students were not able to hear the instruments being demonstrated in person.

“I had to dance around the camera to show them all angles,” Berry said. “It also was confusing for some students since they were seeing backwards. That is one more step of translating the image on the screen to what you are doing at home.”

Lloyd agrees. He said that it was tough to teach students when FCPS allowed hybrid learning starting in mid-January last year.

While students that continued to practice at home have no trouble getting back into the rhythm, a concern of all music teachers this past year has been how to get the students who practiced less during the pandemic up to par again.

“The students who stuck with it last year are the most mature and disciplined members of our fourth and fifth grade,” said Berry. “I am not as worried about them as the students that are missing out on the incredible power of playing in a musical group because they are not able to experience the full scope of playing in band or orchestra.”

In addition to student’s playing abilities, the pandemic has also caused a regression in some students’ abilities to participate. Because of the economic hardship and the restrictions on stores meant some students could not be involved.

Though the effects of COVID-19 made this issue more prominent, Berry said it was not a new issue for FCPS and that they are working to help all interested kids’ ability to participate.

“Equity has been a concern of elementary Instrumental music teachers for decades,” Berry said. “Families have to rent or buy instruments. Because not every family has the means to do this, FCPS has purchased instruments so that all students can choose to participate fully.”

Mr. Lloyd also noticed that equity was an issue in terms of participation last year as well.

“Families who were able financially to provide private lessons for their kids took the initiative to get their kids started on an instrument even though they weren’t in school. They had an advantage over families who don’t have those financial resources or who, without the school program there to encourage their kids, didn’t have a musical background themselves– and so they didn’t do anything to encourage their kids to do it. I think that is part of the reason our enrollment is down some,” said Lloyd.

The harmony of the band experience makes friends for life

Mr. Lloyd believes strongly in the bonds formed between marching band members to help them perform as an ensemble, and he found it was difficult to create that same connection between students throughout the pandemic.

“When you’re trying to teach a subject that is based on being in a group, and everybody is isolated doing their own thing, those two things don’t match up very well. It’s just been very challenging trying to give the kids a sense that they’re still in the band, when they’re just sitting in their bedroom with their instrument,” Lloyd said.

There are still FCPS safety guidelines, but being back in school full-time has made all the difference. Now back in-person, students who stuck with their instruments are more enthusiastic to be involved in band. Because students are now able to be in a group, it is a much better experience for them and their fellow classmates.

“Now that students are back in class every day, it is not difficult to keep them engaged. We all missed making music together,” Cramer said.

Sophomore and musician Cassandra Nti struggled with the lack of community in the band during the pandemic. Nti, like many other students, did not like the format of online school, but she stuck with it in the hopes that things would get better.

“During quarantine, I was having a really hard time and I considered quitting band. However, now that we’re back in person, I’m having so much fun!” Nti said. “I am extremely happy that I stayed. Everyone in band is so nice and it is such an amazing community,”

When all is said and done, Berry takes an optimistic approach to teaching his young students in these somewhat normal circumstances.

“I’m just happy we can have band and orchestra live,” Berry said. “I’ll do whatever they want me to do to teach students music!”

Follow along with the Lancer Band and find their performance schedule at linganoreband.org.