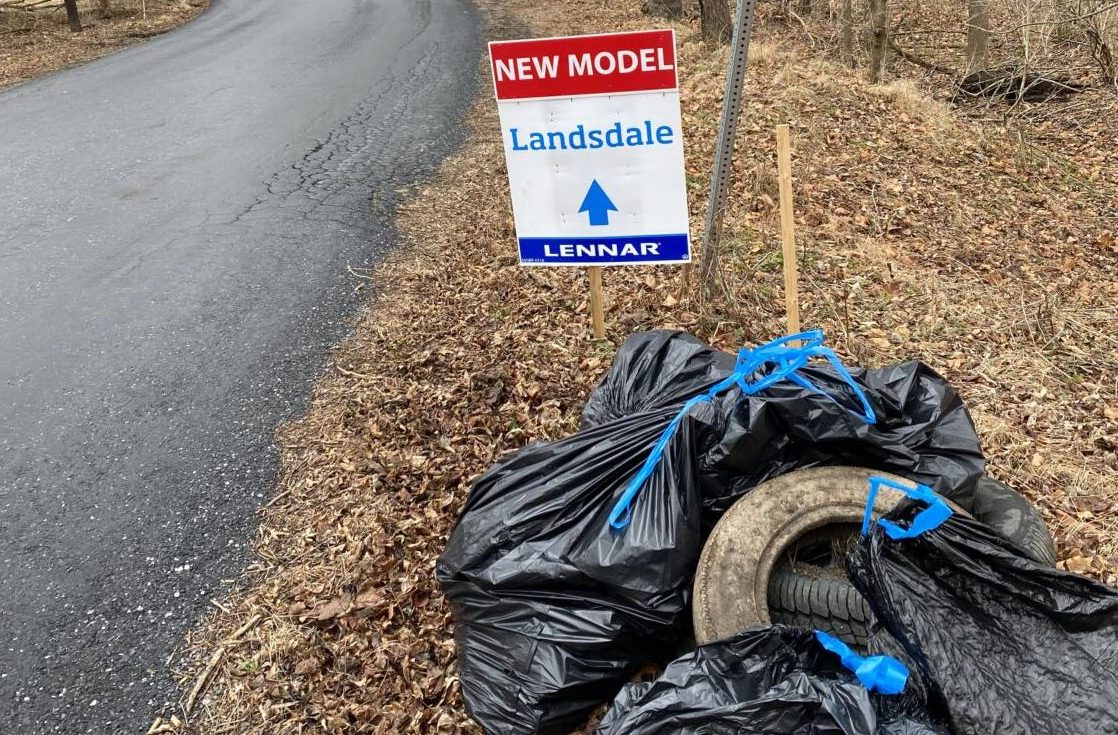 After many frustrating drives along Ed McClain, the Landsdale Community decided to take action.

Food wrappers, drink bottles and glasses, tires and hubcaps. What do all these have in common? This trash is typical of what is thrown away on the sides of Ed McClain Road in Monrovia.

One group decided to do something about it.  Adopt-a-Road and Adopt-a-Highway programs are not receiving publicity, but they are still an important part of helping the environment.

The Landsdale Community has adopted and been maintaining Ed McClain Road since 2017. The guidelines for the adoption show that anyone who adopts the road needs to clean it twice a year. During the summer, the plants around the road grow and it is easier for trash to get left behind. This is why there are planned opportunities for the community to collect the trash.

Ed McClain is narrow, and there are turns where the driver doesn’t have a clear view until the turn is made. This is one of several reasons why safety precautions, like bright vests, signs, etc. are taken.

Community member Amanda Brooks said, “Many times, you are cleaning along the side of the road, a road that is already extremely narrow for two cars to pass safely.  If drivers are not paying attention, they can come very close to where you are cleaning.  You really have to keep an eye out for cars to protect yourself. It’s not just the traffic and narrow road that makes it dangerous, it’s also the trash that has been left.  There are broken glass bottles, tires, unmarked trash bags full of unknown objects – you have no idea what you’re getting into.  So it’s very important to make sure you have thick gloves, pants and appropriate shoes when doing the clean up.  The last thing you want is to get injured while trying to clean up.”

These sharp objects are a cause for the clothing that one must wear when cleaning up the road. Participating members will have an orange vest, a pair of gloves, and usually a trash grabber or stick to pick up the trash. Along with those materials, there is a caution sign put up so that drivers know to pay extra attention when driving that day.

Trash pickup is not glamorous work, and it requires teamwork, communication, and time.

“The process can also be efficient.  If groups/pairs of volunteers are assigned to a particular area, it makes completing the task much faster.  Also, if the group knows where to put the trash, after it’s been collected that helps everyone be on the same page,” Brooks said.

Any community, family, or even individuals can Adopt-A-Road, or Adopt-A-Highway. Adopting a highway is state level, and Adopting a road is county level.

According to History.com,  the first Adopt-A-Highway sign was put up on March 9th, 1985. Although, “The Adopt-a-Highway program really began the year before, when James Evans, an engineer for the Texas Department of Transportation, noticed litter blowing out of the back of a pickup truck he was following in Tyler, Texas.”

James Evans was someone who was going about his day driving down the road in Texas, and saw trash fly out of the bed of a truck in front of him. Just like with many individuals today, this frustrated Evans. So, he did something about it.

In Frederick County, there are many who have taken this same action to Adopt-A-Road.

The head of the Adopt-A-Road department in Frederick County, Laura Hernandes, said, “I do feel that adopting roads makes a difference, for a few different reasons. First reason being, when a person or organization joins the AAR program, they are required to do routine cleanups along the road. This includes picking up any litter, trash, debris, or even larger items such as tires, trailers, and even half of a boat at one location (very rare, but people dump literally anything on the sides of the road) along the county roads. Removing the litter along these roads keeps them clean, and prevents litter from harming local wildlife or even people. Furthermore, any litter in MD is likely to end up in the Chesapeake Bay or ocean which adds toxic contaminants to the water killing our oceans ecosystems and marine life.”

On an Adopt-A-Road sign, there is a place that says who has adopted the road. There are many different groups/people who choose to adopt a road.

While the community chose to adopt Ed McClain Road, it had to be initiated. Harell Little saw the trash all over the road, and after gathering the support of his community, they did something about it.

“When we moved into the neighborhood we saw it was extremely dirty and wasn’t consistent with the nice neighborhood we were moving into (on portions of the road.) We felt like the best thing we could do was be part of the change that we wanted to see in the world, so we decided to adopt the road on behalf of the community. The community also kind of had a bad rep because there were residents against the Landsdale expansion. We also thought it could bring some positive attention towards the community,” Little said.

Although Little and the community members that were in the neighborhood at the time thought that this was an amazing idea, they still didn’t know much about it. It took lots of research and support to make this happen.

Little said, “I knew we would be cleaning the road, but I didn’t know if I’d be supplying the materials, I didn’t know if I would be able to do it with my kids who were minors or if I had to do it myself. So, there was a lot of learning as I started off.” Children are allowed to participate.

Teens could even take the opportunity to earn extra Student Service Learning hours while helping the community. These opportunities are everywhere.

Mr. Jeremy Brown, SGA advisor, said that there have been opportunities for adopt-a-road work at LHS in the past, and he is working on bringing that back to LHS.