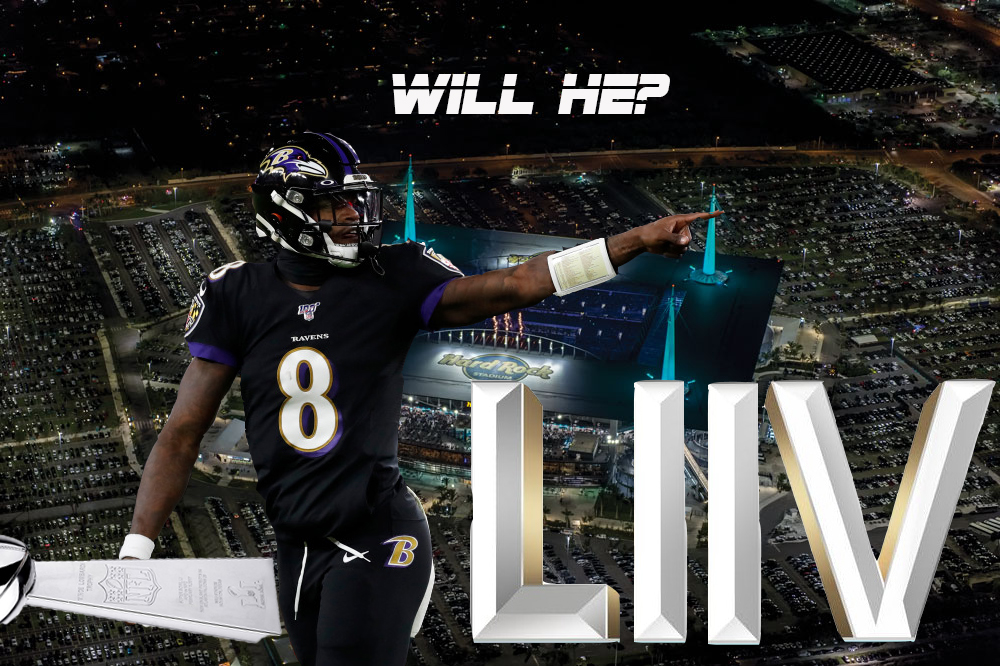 by Carson Buck and Jack Sears

The short URL of the present article is: https://lhslance.org/gurlb

Divisional playoffs begin Saturday, January 11, and we are sure this will be a great weekend for watching football.  Here are our predictions for the playoffs.

The 10-6 Vikings coming off an emotional victory against the Saints, head into Santa Clara full of confidence riding off an astonishing performance from the Vikings defense. The betting line is currently at -6.5 in San Francisco’s favor. I think the 49ers will come out with a tight victory as they have looked like a complete football team all year and I don’t think the surging Vikings will stop that. My score prediction is the 49ers win 28-23.

I just don’t see the Vikings winning against the 49ers, but then again no one saw them winning against the Saints. The key to victory for the Vikings is to having more rushing yards the 49ers, and holding them to under 100 yards rushing as well. The key to victory for the 49ers running the ball effectively and frequently. If the 49ers get over 200 rushing yards they will come out with the victory, I guarantee it. In order for them to get to 200 yards they must count on Tevin Coleman and Raheem Mosterart who have been rushing well all season. 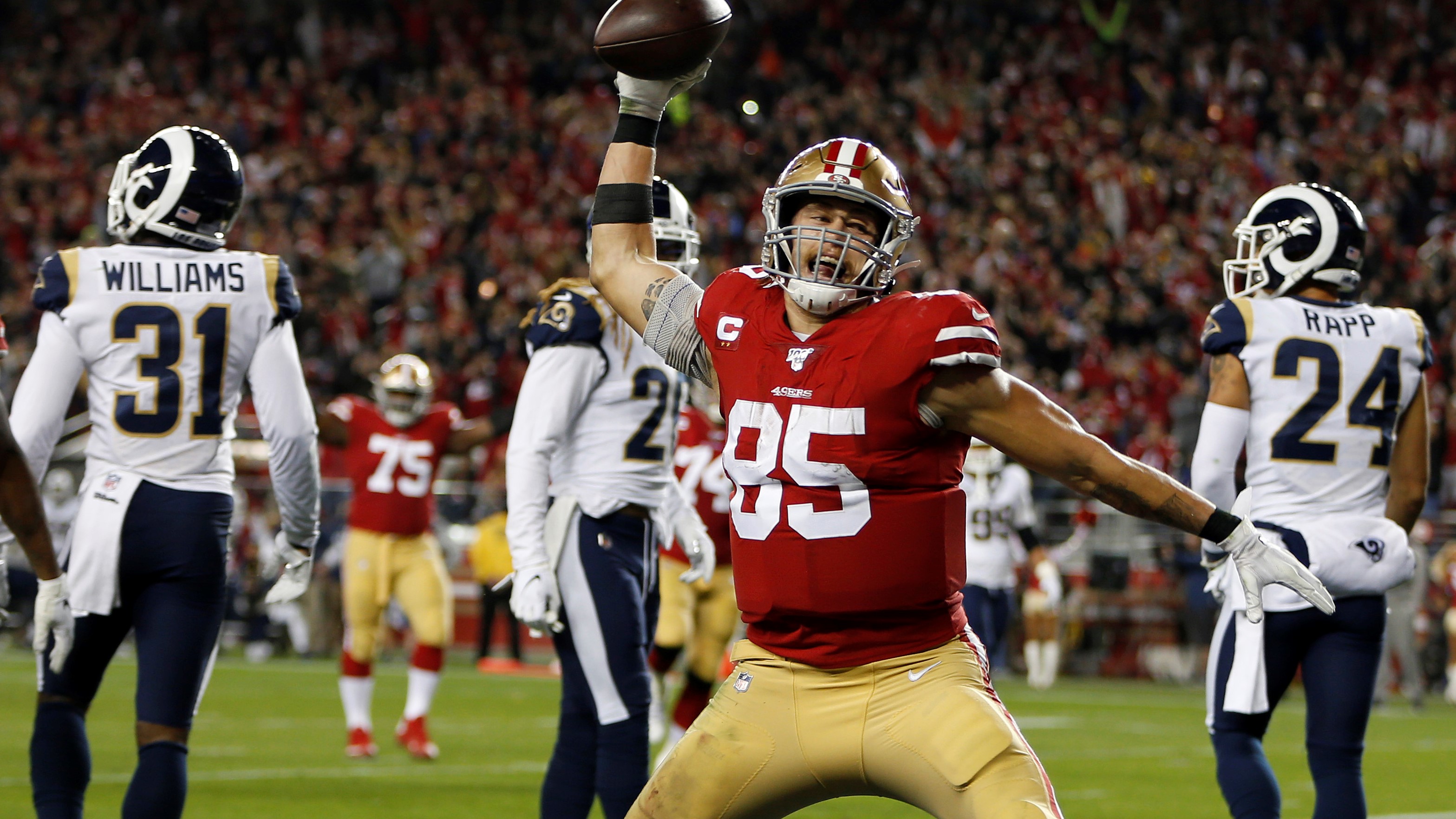 what hasn’t been said about the Ravens this season? Locals have been proud to wear the purple and black this year as they cliched the #1 seed for the first time. The Ravens have a record breaking offense this season, they ran for a team total of 3,296 yards, an NFL record that stood for 41 years. On top of an MVP-caliber performance, second year quarterback Lamar Jackson led the Ravens to a 14-2 record. The only question is was the rest worth it for the Ravens considering growing concerns among sports media of rust for the starters who have not played in 3 weeks. 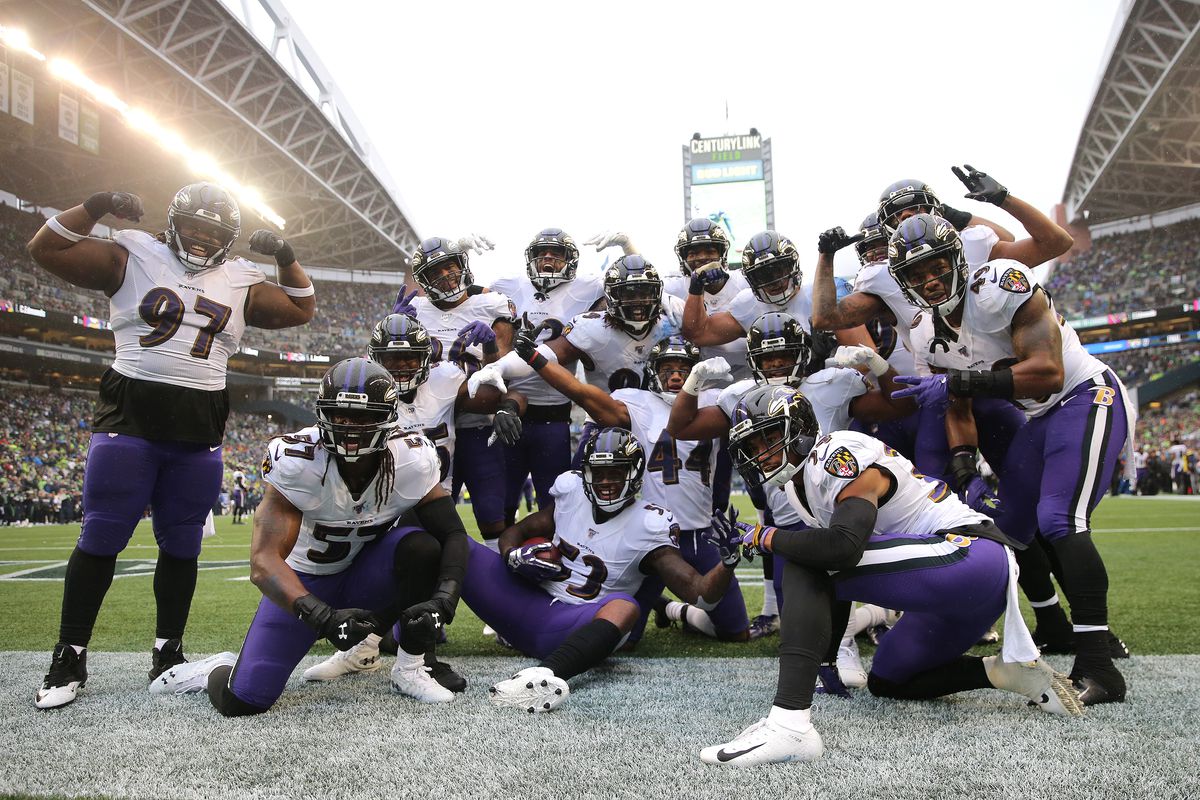 Ravens defense poses after pick-6 against the Seattle Seahawks

The Chiefs have put on the gas pedal, they come of a great record in December with their record being 5-0. The Chiefs were able to overcome the setback of losing MVP Patrick Mahommes early in the season to win 5 straight after week 10. The Chiefs were able to get hot at the right time as they cruised their way towards a well deserved number 2 seed in the AFC, but how do the Texans compete?

Yes, the Texans won the first match up between the two in week 6, but a lot has changed for both teams. The Chiefs have seen a big improvement in their defense in the past month. The Chiefs allowed the least amount of points(52) in the month of December holding two teams to just a single field goal on back to back weeks. The Texans have seen the blossoming of Deshuan Watson into a play maker and MVP candidate. Watson is a game changer for the Texans having passed for almost 4000 passing yards and running for 413 yards. If you don’t believe he’s a game changer watch the Texans overtime drive against the Bills in the wildcard round. The return of 3x DPOY J.J. Watt is a big deal for the Texans who have been less than great on defense this season. I think this game is going to be close one but I have the home team edging out the Texans 31-28, sorry Travis Scott.

I might regret picking the Seahawks over the Packers considering they won out during December, but I’m still not convinced that they are a consistent team that plays up to the occasion. Just the previous week the Packers won 23-20 against the Lions when they were trailing the entire game against the 3-11-1 team. Is the moment too big for rookie head coach Matt LaFluer? Losing to the Eagles and Chargers puts questionable blemishes on their record already and the blowout loss to the 49ers poses a lack of ability to compete with top tier teams.

The Seahawks have resurged this year and look great under Pro Bowl quarterback Russell Wilson. The return of Marshawn Lynch has been successful for the Seahawks as a replacement for the injured Chris Carson. The Seahawks in the previous playoff meetings have always seemed to “have the packers number”, beating them on their last meeting back in 2018. I think the Seahawks are too battle tested to lose to the Packers. My score prediction 17-10 Seahawks.

Brandon Bostick fumbles the onside kick against the Seahawks

During the last matchup in week 3, the Chiefs held off a late Ravens comeback to win 33-28 in Kansas City. A lot has changed for both teams since then, as the Ravens are coming off a 12 game winning streak with many tests along the way. The Ravens have wins against the 49ers, Seahawks, Patriots, Texans, and Bills, who all have a winning record. What the Chiefs have on the Ravens is that Patrick Mahommes has beaten Lamar Jackson both times they played. The Chiefs defense has been playing much better in the recent weeks, a defense the Ravens have previously struggled against. My score prediction is 28-23 Ravens as they are the home team I think they will come out with a tight win.

This game could go either way, considering that these two teams split the divisional series between the two this year, both being close games. Seattle has already won at San Francisco and vice versa for the 49ers. I think this game will come down to the rushing attack of San Francisco against the arm of Russell Wilson. However, it might be the underrated 49ers defense who steals the show for them to win the game. The margin of victory will be slim between the two teams, it will go down to a field goal or late score, the 49ers really need the crowd energy on their side. I tip the away team to win with the Seahawks winning 24-21 in overtime. 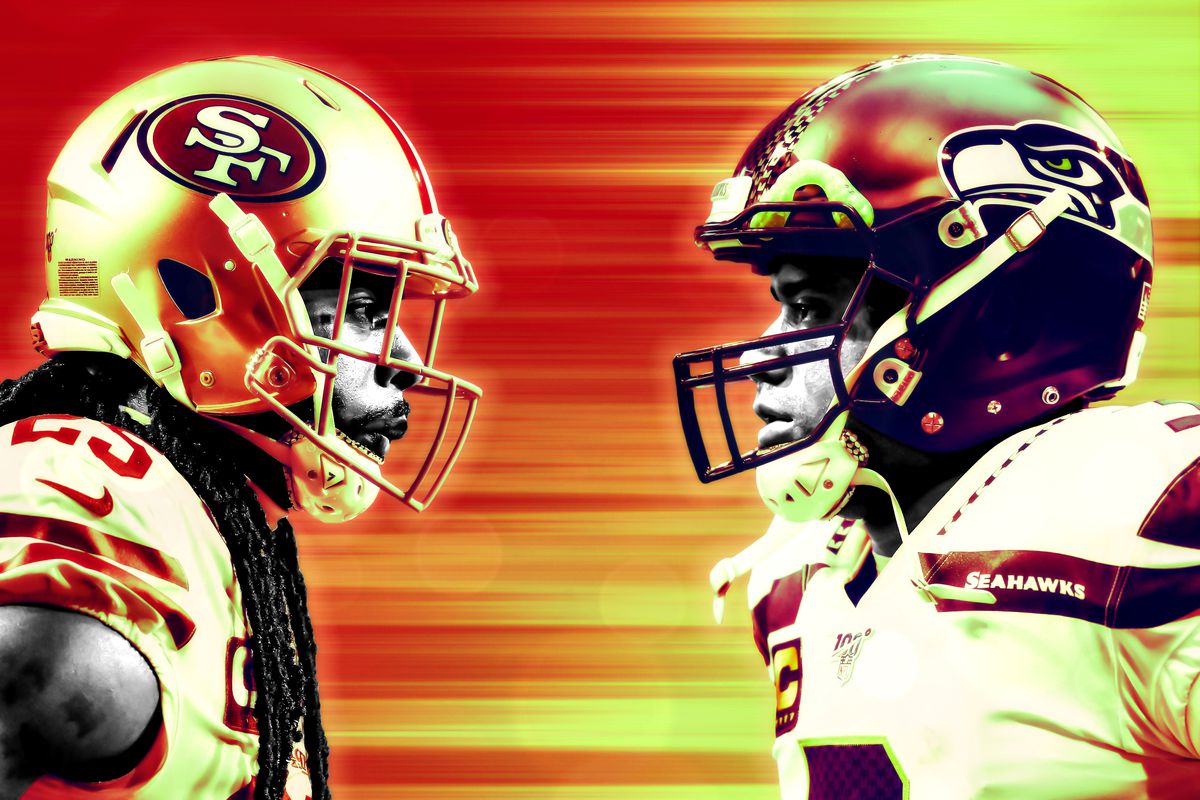 Fierce Rivals 49ers and Seahawks stare at each other

The Ravens having previously beaten the Seahawks have the edge since they won a tight game in Seattle already. The Ravens since the matchup earlier in the season have shown improvement on all sides of all ball while the Seahawks have raised their game, it’s not enough to beat the Ravens. The worst case for the Seahawks is that it turns into a shootout because the Ravens Defense has significantly improved since their last meeting. For the Seahawks the question is how will injuries affect them going into the Superbowl and if Marshawn Lynch is an effective solution for the rushing game. I have the Ravens winning 35-24 in Miami winning their 3rd Superbowl of the millennium.

One of the easier decisions to make as Lamar leads the league in TD passes, QB rushing yards, and wins as a starter. Jackson has been a dynamic playmaker He’s played like an MVP all year and rightly deserves the award, enough said

With a twitter handle like @cantguardmike you’d have to be a good receiver. Nobody could guard Mike this year as Thomas set the NFL record for most receptions in the season with 149. He was a dynamic weapon all year for the saints and go to target for Drew Brees.

Can a player really go from a nobody to the defensive player of the year? With a tally of 19.5 sacks you can! Shaquil has been a nightmare for opposition offensive lines this year nearly doubling his entire career sacks in one season.

Eclipsing 1000 yards receiving is a milestone for a receiver of any age, let alone for a rookie. A.J. Brown made an instant impact on the Titans as a playmaker this year whether it’s getting rushing touchdowns on an end-arounds, or catching one of his 8 receiving touchdowns.

A Bosa tearing up the NFL, Tell me if you’ve heard this before? Nick Bosa the brother of Joey Bosa (who plays for the chargers) had an instant impact on the 49ers this year. Nick Bosa had 9 sacks, 1 interception, 1 forced fumble, and 68 total tackles. He also picked up a week 8 defensive player of the week award.

After suffering an ACL injury last year Dalvin Cook had a break out return with the Vikings. Cook ran for 1,135 yard and scored 13 Touchdowns. Cook is Football Outsiders highest graded player on the Vikings for the 2019 season.