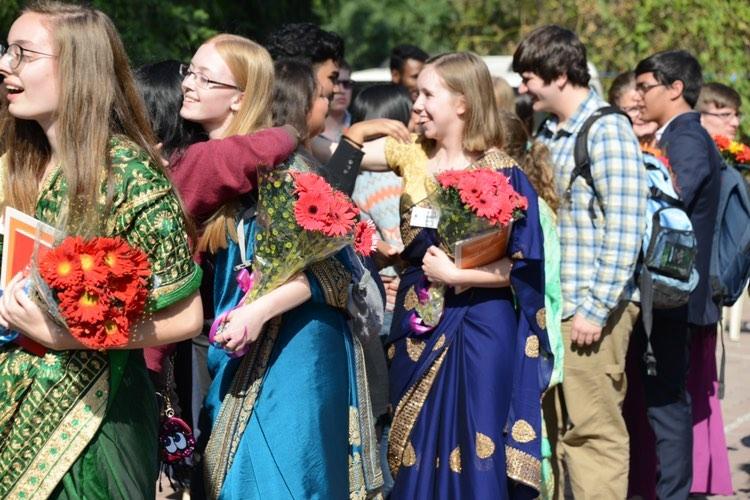 Leah Stucke (NY), Madeline Klein (NY), Elizabeth Anderson (MD), Zack Visker (NY), and Nito Slack (MD), say goodbye to youth at Apostles Methodist Church in Delhi, where they were given flowers and books as well as tea and snacks.

Namaste: My experience with radical hospitality in India

Would you open your home, your church, your community center, at a moment’s notice to complete strangers?

This is the meaning of the traditional Indian greeting “Namaste,” which is usually accompanied by the speaker’s hands pressed together in front of the chest while they give a small bow.

On my recent trip to India, “Namaste” was the first thing I learned–and the most important. It was the most common greeting I used and a sign of respect and peace toward others.

Since I was traveling as part of a “Mission of Peace” through the United Methodist Church along with a group of students and adults from the United States, “Namaste” truly encompasses the purpose and goals of our trip. Keeping this word in mind helped me open my mind and heart and see how others opened their hearts and minds to me.

It changed me completely, and now I fully embrace “radical hospitality.”

At its core, radical hospitality is the act of extending service toward others beyond what is comfortable or easy. It is something that, after my time in India, I can’t find in the United States.

We think that we are generous when we donate budgeted money to charity and scheduled time to nonprofit organizations. And to an extent, we are being generous and hospitable.

This is the kind of generosity I experienced in India, not just once or twice, but nearly every day of the trip. People swept us into their space and their lives with smiles and open arms, always giving more than was necessary in the form of tea, coffee, snacks, flowers, shawls, garlands, and books–to name just a few.

This graciousness is more astounding when you realize that in a nation of 1.37 billion people, over 800 million (almost 60%) are considered poor.

In comparison, approximately 40 million people in the United States are poor, only about 12% of its population of 327 million.

Americans are in a much better position to give than Indians, yet they almost always give less. Even in a slum hospital we visited in Delhi, we were given tea, cookies, and tours of the facilities–money, resources, and time that the doctors and administrators who met with us could have used for purposes other than treating a group of high school students from the U.S.

Every day of our mission, we received some form of gift or another which often went far beyond expectation. On the first day, a church we visited cut roses and ordered plaques for each one of us.

“Our group’s experience at Centenary Methodist Church in Hyderabad stands out to me [because] everyone was so inviting and kind,” said Maya Tzan, a sophomore at Century High School in Sykesville, MD. “They gave us roses, [the meaning of which we] later learned is ‘welcome home.’”

These are just a few of the items we received, and more than gifts they are representations of memories that I will carry with me for the rest of my life. What I will remember even more, though, are the faces of the people who gave these gifts, and opened their doors to me, and spoke to me with care and interest in their words and in their eyes.

Imagine if this is how we treated guests in the U.S. Imagine if we didn’t expend all of our generosity sending donations to organizations and people that we will never meet face to face. What if we went above and beyond, and gave up our space and time for people, whether strangers or not?

“I think that Americans need to take after Indian culture by welcoming new people with open arms,” said Maddie Johnson, a junior at George Washington High School in Charleston, WV. “The generosity we felt in India was unlike anything I’ve ever experienced.”

Might we one day even be willing to give up our possessions without hesitation?

I ask this because there were many times that someone offered to give me an article of clothing or jewelry after I extended a compliment. In one case, a woman was already taking off her scarf when I explained that my intention was merely to admire her attire. But this was shocking to me because at home, I would never even think about giving someone else my belongings at a moment’s notice.

Before I left for India, I was surprised by the number of people who brought up concerns stereotypical of the country and its residents. Now, I can prove them wrong. Americans do not begin to compare to Indians in kindness nor openness toward strangers, so we have no room to make assumptions about the culture and faith of India. And this applies to all other nations of the world as well.

I departed for India on December 28 and returned on January 15 having spent 16 days in the country. In those 16 days, I learned more than I think I have in the past several years of formal school, not only about radical hospitality, but also about interfaith relations, poverty, world cultures, and peace.

I wish everyone could share my experiences on this trip. But since that isn’t possible, I highly encourage you to find your own “Mission of Peace.” The one I traveled on is an annual trip hosted by the Northeastern Jurisdictional Council on Youth Ministries for the United Methodist Church. Each year since 1986, it has taken students from the Northeast United States to a different country to promote tolerance and peace among nations.

And if you can’t travel, I challenge you to reflect on “Namaste” and radical hospitality. And if you begin to practice the unique generosity that radical hospitality offers, you don’t have to start big. Just go a little outside of your comfort zone, and then a little more. You might find yourself having a completely new perspective on the world. 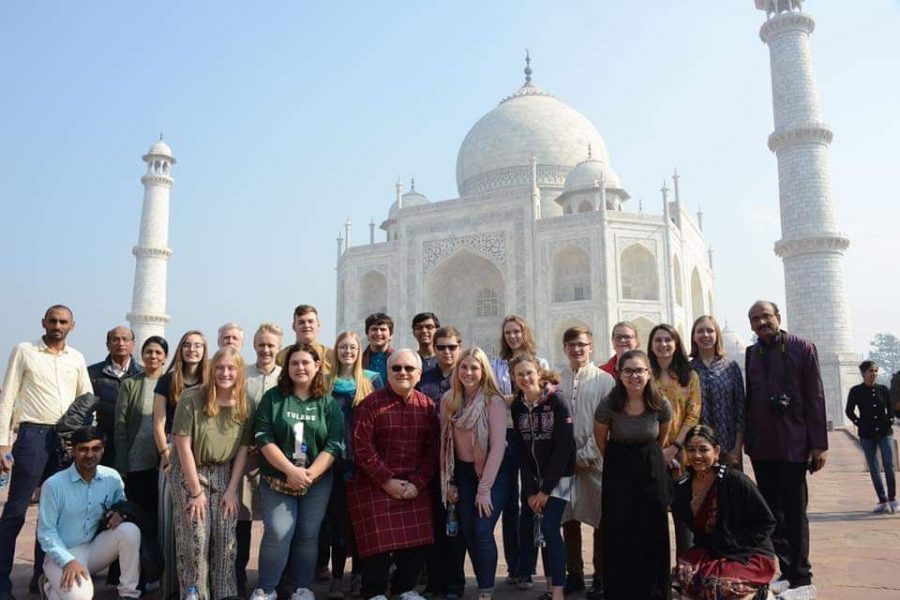 Gallery|10 Photos
Courtesy of Tom Schmidt
The Mission of Peace group poses outside of the Taj Mahal in Agra.
Donate to The Lance
$500
$500
Contributed
Our Goal