Right place, wrong time. For how many black men is this more than just a story? This is a daily possibility, a reality. 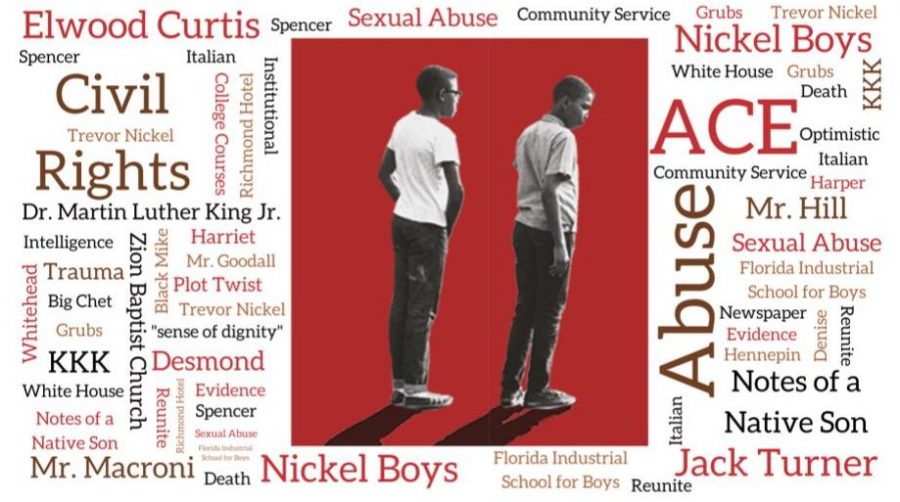 Elwood Curtis and Jack Turner, two world collided into one, surrounded by the commands of abuse given by the Nickel Boys Academy.

Reform school and abuse. Elwood Curtis and Jack Turner. Optimism and pessimism.  One way or another, there are always two sides to every story. Only the unmarked graves tell the gruesome truth. 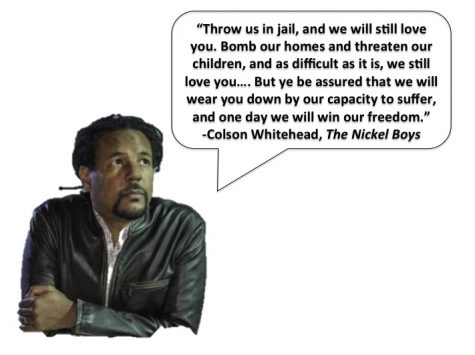 For the first  NEHS (National English Honor Society)  book club, officers read Whitehead’s new book The Nickel Boys. Two-time Pulitzer prize winner Whitehead, author of The Underground Railroad, based his story The Nickel Boys on a real reform school-turned-place of torture in Florida. The eleven members unanimously agree that this is worth the reading time and effort–it provides a life-changing perspective.

As a young black female, throughout my 12 years of education, school lessons based on race and history never move past the periods of slavery and segregation.

Although The Nickel Boys is still set in the period of segregation, for once I can say that I was able to touch a new aspect. A new aspect of heartbreak.

Books tend to reach the point where they make a “happy ending.” In To Kill a Mockingbird, Atticus is able to cover up and save Tom Robinson. Yet this book moves past the happy ending. It’s time to add novels like this to the canon of what students read in high school.

Readers are able to see the nasty and shocking truth.

Elwood Curtis: intelligent, activist, naive. Elwood is the picture-perfect young black man from Florida in the 1960s. Ahead of peers beyond measure, he is given the opportunity to enroll in college courses. Elwood’s potential has no limits: the only boundary is the color of his skin.

Guilty by association, Elwood is arrested, the innocent passenger in a stolen vehicle.

Right place, wrong time. For how many black men is this more than just a story?  This is a daily possibility, a reality.

Elwood is sent to reform school where he meets a new friend; Jack Turner. Turner is the complete opposite of Elwood, as he exhibits a pessimistic outlook on the world. Even in this horrible place, Elwood believes in the words of his role model, Martin Luther King, Jr. “We must believe in our souls that we are somebody, that we are significant, that we are worthful, and we must walk the streets of life every day with this sense of dignity and this sense of somebody-ness,” said MLK.

In an interview with comedian and television host Trevor Noah, Whitehead discussed his journey toward the publishing of The Nickel Boys.

BASED ON A TRUE STORY

Whitehead describes the writing process as “viewing trauma through a lens.” The Nickel Boys is based on a true story about the Dozier School for Boys in Marianna Florida.

The Dozier School has a long history of abuse and brutality that was both ignored and actively covered up until unmarked graves were discovered in 2014. Since the first graves were discovered, more have been uncovered.  Like the real Dozier School, in the story, the boys are brutally punished for small misdeeds such as speaking up against injustice.

Throughout interviews, Whitehead explains why he has never visited the Dozier School, even though it is the inspiration for his novel.

“I meant to go to Florida and visit the school and I kept putting it off and I was halfway through the book. I kept saying ‘next month, next month’, and then I realized the thought of going down there, I’d get this sort of sick feeling. This heavy feeling. I was so invested in Elwood and Turner’s story and the stories of the kids who’ve been to school and I realize that if I went down there it would be with a bulldozer and stick of dynamite to destroy it. It’s a place of evil.”

“A year and a half ago, Hurricane Micheal actually knocked it down. It was crumbling and now that inner rot was written on its outer face. Mother Nature took over for justice.”

The horrors from the Dozier Academy extended into the horror of The Nickel Boys. Children as young as at the age of 6 were sent to a reform school that is supposed to be of use to educate but instead abuses.

“They found 65  unmarked graves, and they tried to reconstruct what happened. In the unmarked graves, they dug up bodies and found kids with shotgun pellets in their skeletons. Blunt force trauma to their skulls,” said Whitehead.

The remote building where boys are taken to be punished is called The White House.  Elwood and Turner, along with the rest of the boys, have all had an encounter with The White House. Here is where some boys receive beatings and others meet their deaths.

THIS NOVEL SHOULD MAKE US ALL ACTIVISTS FOR CHANGE

This book is more relevant now than ever. With the wave of continued police brutality and the Black Lives Matter Movement, the Nickel Boys is perfect for young activists–no–for all students–to read.

The story takes place in the 1960’s, but the message is for today where the abuse of the correctional institution is all too familiar.  For centuries, systematic racism has been implemented into society.  Whitehead uses the triumphs of the Civil Rights movement (the outward appearance)  to emphasize that racism and oppression continue behind the scenes, especially in the correctional system.

According to the Prison Policy Initiative, “Systemic racism is evident at every stage of the system, from policing to prosecutorial decisions, pretrial release processes, sentencing, correctional discipline, and even reentry. The racism inherent in mass incarceration affects children as well as adults, and is often especially punishing for people of color who are also marginalized along other lines, such as gender and class.”

The racial disparities in prisons mostly target black men. Although the novel takes place in the 1960’s, it could be set in today’s world.

Michelle Alexander, author of New Jim Crow: Mass Incarceration in the Age of Colorblindness is a civil rights lawyer who writes about the disparities of people of color in jails.

This is how Whitehead’s book mirrors American racism today.

Elwood wasn’t born into a family “denied of freedom”. However, he didn’t have it easy as he was raised by his grandmother due to the orphan-like departure of his parents abandoning him. Alexander discusses  the lifelong sense of imprisonment that young black men face.

“The nature of the criminal justice system has changed. It is no longer primarily concerned with the prevention and punishment of crime, but rather with the management and control of the dispossessed,” said Alexander.

The management and control of Elwood and Turner sickens the reader with its brutality, but it also makes us think more deeply about what goes on behind bars.

From the Prologue to the final chapter, the reader has all the answers that they don’t see.  This is part of the masterful narration of the novel.  It’s even more surprising that with all of the horror, optimism and hope prevail.