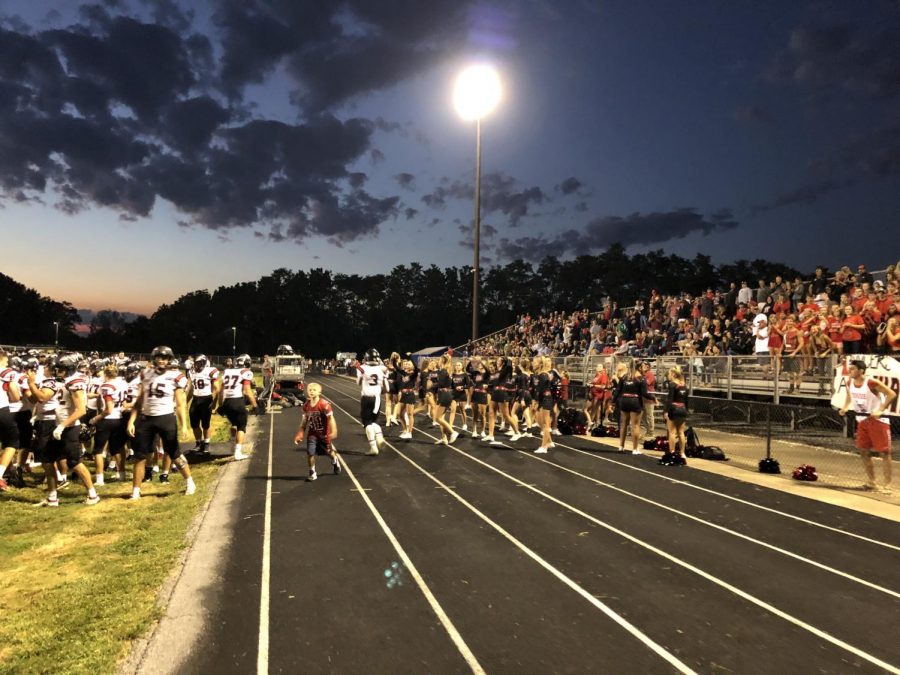 Xander McClure celebrates with the crowd and his team after scoring a touchdown.

The short URL of the present article is: https://lhslance.org/p51m5

After losing 21 seniors for the upcoming season, Coach Rick Conner and the football team had some readjusting to do. For most teams, their season would be terrible if they lost players from last year like Ryan Leyh, Joey Felton, and more. But Linganore has proven to come back to compete just as much as their past teams.

On September 6, the varsity football team went up against quarterback Nate Kent and the Liberty Lions. The Lions had some momentum going into the game, beating smaller Carroll County teams in preseason. However, their style of play looked to be similar of last year’s Westminster Owls team. Both teams had strong quarterbacks. For Westminster it is Christian Etchinson. He can run and pass the ball efficiently. However, just like last year, the Lancers’ defense was able to scheme to force Kent to pass instead of making run, which led to multiple turnovers.

And with the defense holding the Lions all night, the Lancers’ tough running offense led to big plays for running backs Xander McClure, Brady Domroe, and Joey Bruscia. McClure led the Lancers with 3 touchdowns and 182 yards from scrimmage, which doesn’t even include the flea-flicker play where quarterback Timmy Conner threw a pass to Will Coletti for 5 yards and Coletti then pitched the ball to McClure to go for a 75 yard touchdown. McClure also had approximately an 80 yard kickoff return touchdown with 3:38 left in the first half.

McClure said, “This is the best offensive line in the county. I wouldn’t want to have any other line to run behind. We all have such a great connection on and off the field.”

The rushing success didn’t come to a halt when McClure wasn’t in the backfield. Domroe and Brusica both helped carry the load with McClure. Domroe would eventually have a 94 yard touchdown run after he broke a tackle and was past everyone in the secondary. He also had a touchdown on the Lancers’ first possession after Coletti recovered a fumble from the Lions running back Tommy Nelson.

The Lancers game also debuted the new quarterbacks in sophomore Timmy Conner and senior Joey Brusica. While the Lancers stuck with running most of the night, both were able to run the offense fairly efficiently.

“Timmy played amazing. For a sophomore to come up to varsity and play quarterback is crazy,” said McClure.

The Lancers start out the season 1-0 and face the Westminster Owls at home on Friday September 13 at 7:00 pm. The Owls are 0-1 after suffering a 42-23 loss to South River High School. Make sure to follow @Jason_Byrd2021, @linganorefb, @LHSJournalism, and @FrederickSports to get the latest football coverage.