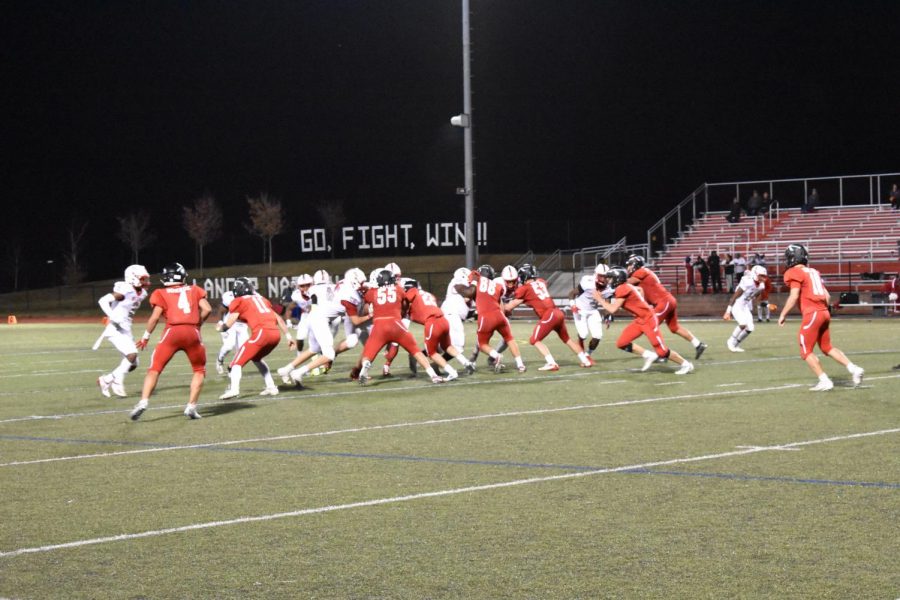 The Penns Grove Red Devils run the ball leading up to another score.

Going 6-0 was going to be a tough task for the Lancers as they faced state champions in the Penns Grove Red Devils. And although the Lancers in theory could compete with the Red Devils, they were worn down by explosive plays and self-miscues as they fell to 5-1 in a 34-6 loss.

The biggest takeaway from the Lancers’ performance was the number of turnovers. After the Lancers stopped the Red Devils on their first possession, Will Coletti, who is a very reliable punt returner, fumbled and loss the ball to extend Penns Grove’s time on the field. As the Lancers held them once again on fourth down, Lancers quarterback Timmy Conner through an interception, which would lead to the Red Devils’ first rushing touchdown by Nasir Robinson.

It’s going to cost us in the long run if we can’t keep our penalties down..”

“We can’t keep shooting ourselves in the foot. It’s going to cost us in the long run if we can’t keep our penalties down,” said offensive line coach, Coach Dixon.

For the Lancers of offense, once again, turnovers by the Lancers was discouraging throughout the game. 4 fumbles and an interception led to very little offensive production. The Lancers were only able to score off a Brady Domroe 36-yard rushing touchdown. The Red Devils big defensive line was able to hold the Lancers, even with them running for 185 yards. The problem was that the Lances would either have a good drive that would end because of a penalty or they would have an abrupt ending to their drive within a few plays.

“We need to hold onto the ball and I need to complete more passes going forward,” said quarterback Conner.

The Lancers are able to regroup this week and prepare for their game against the Tuscarora Titans on October 25 at 7:00 pm. The Lancers will be 6-1 going into that game because of the forfeit win they receive from TJ High School due to their program shutting down. Make sure to follow @Jason_Byrd2021, @linganorefb, @LHSJournalism, and @FrederickSports to get the latest football coverage.