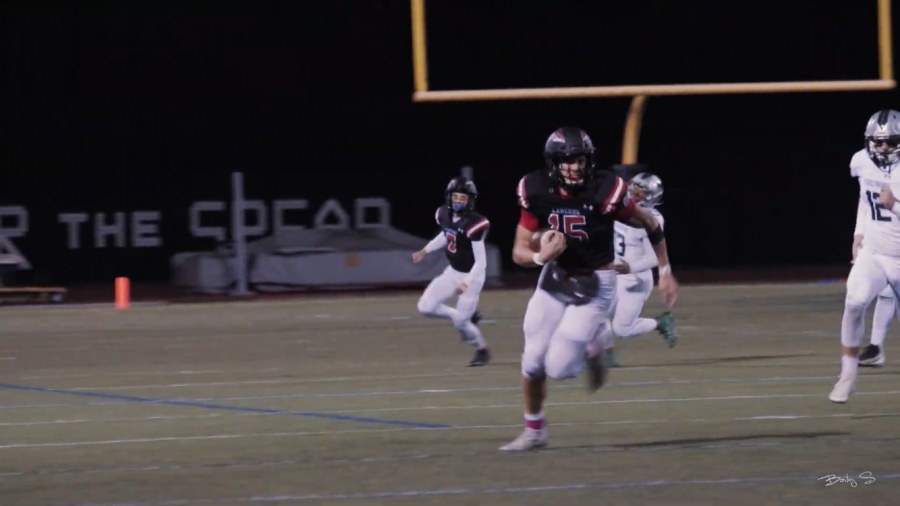 The short URL of the present article is: https://lhslance.org/fjwjb

Yet another huge performance on the ground for the Lancers. Xander McClure going off for 249 rushing yards on 20 carries, 3 touchdowns, one of those touchdowns comes from a 88-yard kick off return coming out of halftime. Not only McClure, but Joey Bruscia, Brady Domroe, and Nick Hayslett each scored a rushing touchdown to slay the Titans going into the final regular season game.

After having a bye week after their loss to the Penns Grove Red Devils, the Lancers regrouped and were ready for Jordan Addison and the Tuscarora Titans. Addison, who had a tough week against Middletown, had a bit more success. Addison caught 10 passes for 143 yards and a receiving touchdown. Addison also scored on a 75-yard kick return with 3:28 left in the first half, meaning Addison had the only Titan scores.

But what separated the Lancers from the Titans was their consistent drives on offense and multiple defensive efforts. Timmy Conner, who had his share of struggles against Penns Grove, threw for 7/10, 129 yards and a touchdown to Matt Schiller. Conner also completed a 2-point conversion pass to Schiller, as fans went crazy. Schiller has had a long road to get to back to scoring after his season-ending knee injury early last year.

“Timmy is throwing the ball great. We’re on fire right now going into the Urbana game. I’m not worried at all as long as we don’t play against ourselves,” said Bruscia, who is also coming off of a collarbone injury suffered after the Oakdale game.

One of the biggest aspects of this win was the defense’s intensity. The held the Titans to only 15 points, had an interception, and got a sack. The interception and sack coming from senior defensive lineman John Pfaff. The Lancers were able to force four turnovers on downs, which would lead to many of their scoring drives.

Now, with the regular season coming to an end, there’s only one way to end it off: The I-70 trophy matchup between the Lancers and the Urbana Hawks. The Hawks (5-2) beat Frederick last week 39-20 but showed signs of weakness in their 24-14 loss against Oakdale in Week 7. The game takes place on Friday, November 1 at 7:00 p.m. at home. Make sure to follow @Jason_Byrd2021, @linganorefb, @LHSJournalism, and @FrederickSports to get the latest football coverage.