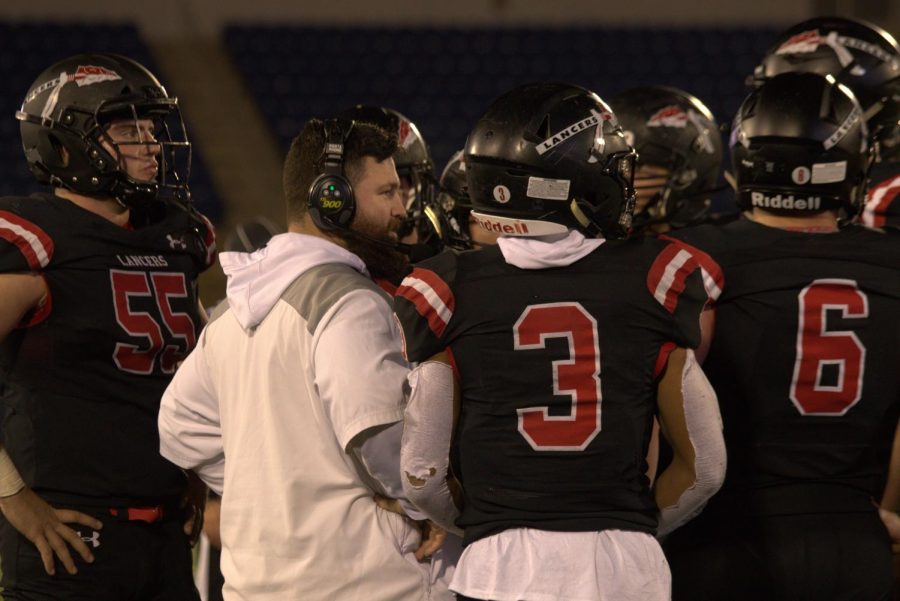 Coach Michael Rich talks with the offense going int their next drive.

Lancers fall short in 3A championship to Damascus

Coming into a game where they go up against two Clemson commits in Bryan Bresee and Ryan Lithicum, the Lancers knew they were battling against tough odds. Come game time, the Lancers, despite their best efforts, didn’t have an answer for the powerhouse in Damascus.

One of the biggest factors was the Lancer struggle to get a consistent running game. The Lancers had only 47 rushing yards among all backs and were frustrated by three fumbles. Lead by Bresee, the Hornets’ d-line clogged any rushing lanes that the Lancers usually have to work with.

“We didn’t play our best, simple as that. Offensively we had our struggles but our guys were giving it their all,” said Coach Rick Conner.

The Lancers’ defense held their own for most of the game, but the Hornets’ long drives began to wear down the defense as the game went along. Six of the Hornets’ drives went for 7 or more plays, which, over the course of the game, can lead to trouble for a defense since the offense didn’t have many long drives.

Even though the results weren’t in the Lancers’ favor, there were many great takeaways from this season. Coach Conner said, “I wouldn’t want to coach any other team. Just because we didn’t play well doesn’t mean this game defines our season.”

Seniors Joey Bruscia, Matt Schiller, Dustin Keith and junior Xander McClure all reminisced about their efforts throughout the season. McClure spoke on the relationships he had made with all the seniors and how he won’t forget them. Bruscia saying that all the seniors gave it their all and wouldn’t want to play with anyone else. Keith and Schiller’s feeling were mutual and that these were a great group of guys.

The Lancers will continue to put in work as juniors like McClure, Scott Hummel, and Brady Domroe prepare for their senior season as Lancers. Make sure to follow @Jason_Byrd2021, @linganorefb, @LHSJournalism, and @FrederickSports to get the latest football coverage and Lancer sports updates.