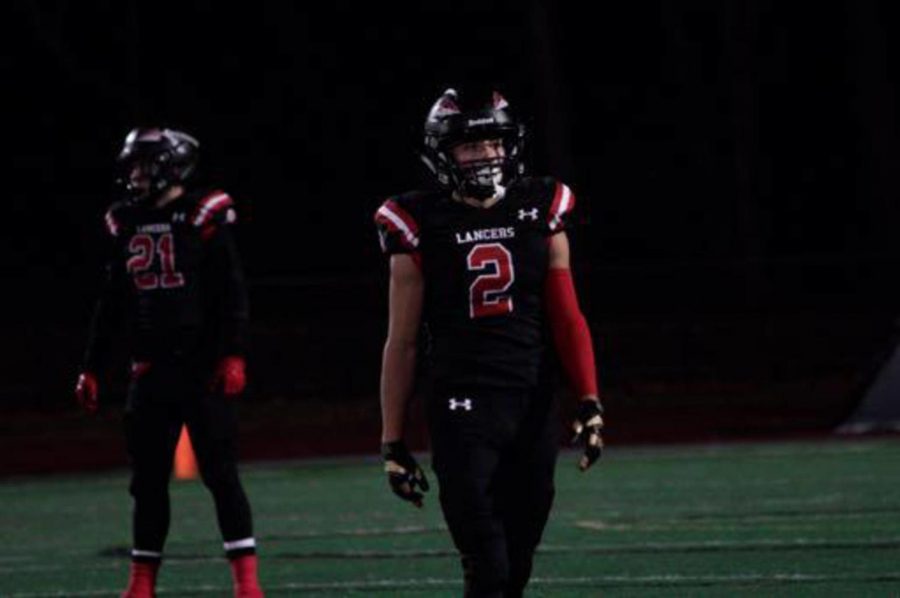 The short URL of the present article is: https://lhslance.org/xb7h3

As the Lancers force a turnover on downs as Urbana struggled in their final offensive possession, the Lancers regained the I-70 trophy for the 8 consecutive time. The Lancers throughout the game had their share of struggles on offense, having fumbled twice on their first two possessions of the game and an interception. Nevertheless, the Lancers go into playoffs 8-1.

In the end, it was the defense for the Lancers that not only kept them in the game, but win them the game. The defense had 6 sacks, Dustin Keith having 4.5 of the sacks himself. The defensive turn on came mainly in the second half when the Lancers were able to get after the Hawks’ quarterback Kyle Howse more successfully.

“We were able to play as a team and execute when we needed to the most,” said Keith.

Howse had probably one of his worst performances of the season, throwing 17/47 for 174 and ran for a 1-yard touchdown in the third quarter. The Lancers defense proved that they could contain a good quarterback that can scramble and throw the ball. In fact, in the first quarter, the Lancers held Howse to 3/12 for 34 yards.

The Lancers offense, outside of the turnovers, couldn’t get into a consistent grove throughout the game. Their scores came off a Xander McClure 73-yard and 5-yard touchdowns. However from McClure’s score with 7 minutes left in the second quarter, the Lancers didn’t score again until McClure scored a 32-yard touchdown with 9 minutes left in the game.

“We’ve got a lot of momentum going into our first playoff game. If we practice and play how we have, we’ll go pretty far,” said Matt Schiller.

The Lancers face off against Kisaye Barnes and the Frederick Cadets (4-5), which is the Cadets first playoff game appearance since 2004. Make sure to follow @Jason_Byrd2021, @linganorefb, @LHSJournalism, and @FrederickSports to get the latest football coverage.