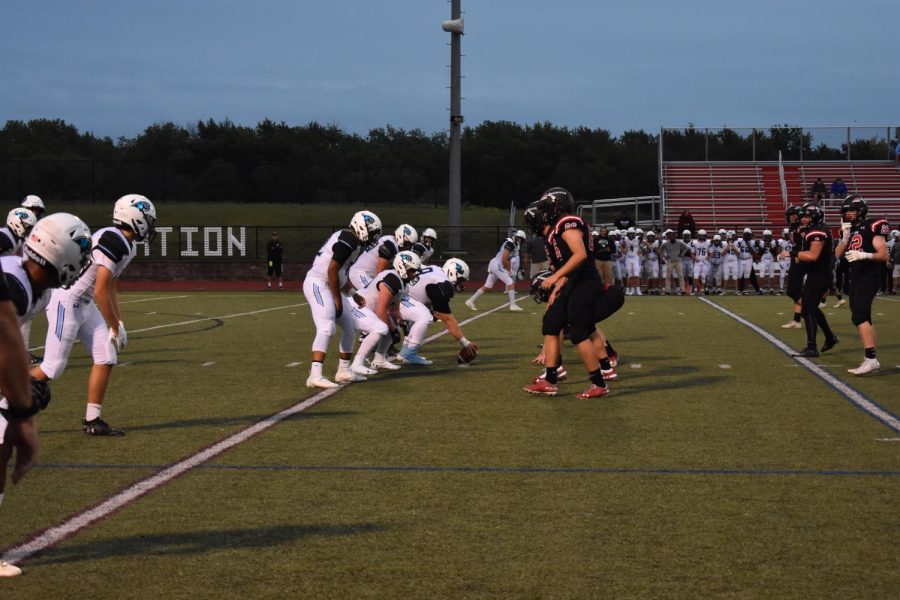 The Lancers' defense lines up just before the Owls hike the ball.

The short URL of the present article is: https://lhslance.org/z606q

Even with the Lancers scoring 31 points, this game was slowed down more than usual for a Lancer team that feeds off of momentum and a hurry-up offense.

On September 13, the Lancers played their first home game against the Westminster Owls. Both defenses started the game playing well after the score ending the first quarter was 3-0 after an Ethan Thompson 32-yard field goal. The Lancers’ secondary played great coverage downfield on the Owls’ wide receivers.

“It wasn’t Coach’s game plan to play more slow pace but we were still able to score and get turnovers,” said Brady Domroe.

The Owls gained possession as the first quarter ended. The first play in the second was a bad snap that went into the endzone from the 10-yard line. The ball was picked up for a touchdown by defensive end Cole Mitchell, fueling a great defensive series when the Owls returned to offense. The first half of this game was riddled with penalties and turnovers. The Lancers ended the half with four offensive penalties, two of which came on the same possession.

“I think we have one of the best defenses in the county. Both our secondary and defensive line played extremely well.””

However, the Lancers’ self-made mistakes came to an end in the second half, which is more than you could say about the Owls. Quarterback Jalen Bradford struggled all night, passing 14/39 for 157 yards and three interceptions. The Owls offense also had six fumbles, three of which the Lancers recovered. Bradford, although completed more passes in the second half, couldn’t get into any kind of grove because of the disruptive defensive line lead by Dustin Keith and Mitchell. Bradford was forced to run more as well, usually out of a designed pass play because of defensive pressure. Two of the nine Owls turnovers turned into direct points: the first fumble when Mitchell recovered it for a touchdown and defensive back Ryan Barthlow had a 45-yard pick-6 three minutes before halftime.

Domroe when asked about the Lancers’ defense said, “I think we have one of the best defenses in the county. Both our secondary and defensive line played extremely well.”

Switching to the offense, the Lancers were still playing their chip-away offense with their constant running. But their pace throughout the game was slowed down by the Owls defense. The scores came from big plays like the one to start off the third quarter when Domroe caught a pass from Joey Bruscia and ran for an 80-yard touchdown. Domroe also had a 19-yard rushing touchdown after the Lancers’ Johan Samayoa returned a punt to the Owls’ 26-yard line.

The Lancers play what should be a close game against the Middletown Knights (1-1) Friday, September 20 at 7:00 pm in Middletown. Domroe said that the offense will need to step up a bit more and not make too many mental mistakes if they want to become 3-0. Make sure to follow @Jason_Byrd2021, @linganorefb, @LHSJournalism, and @FrederickSports to get the latest football coverage and read @joeferrarofnp on his take on the game.