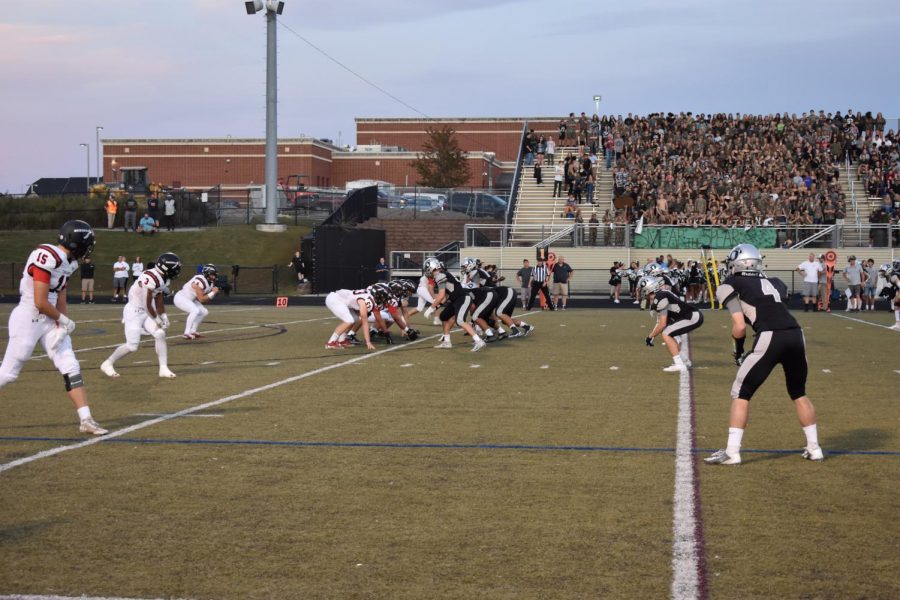 The Lancers offense lines up for their first possession of the game against the Bears.

The short URL of the present article is: https://lhslance.org/ioa8q

It’s been years since the Lancers bested the powerhouse Oakdale Bears. The Bears’ offense has been very explosive and has got the better of the Lancers each time. As of September 28, the Lancers have regained a win at Oakdale.

The night began with a rough start for both teams. The Lancers went three and out on their first possession, which would lead to a Dylan Berny rushing touchdown. The Bears’ special teams, following the touchdown, allowed Lancer Xander McClure to go for a 99-yard kickoff return. This would fuel a Will Coletti interception on the following Bears drive and a Drew Mullineaux fumble recovery.

The Bears’ running backs would rush for 201 total yards; however, quarterback Ethan Reifer struggled all night. Reifer threw two interceptions, fumbled twice, and was sacked once. Reifer was the Bears’ biggest offense hope going into this year after losing Collin Schlee. The Lancers defense was able to hold the Bears to short gains and only let up three possessions that had 10 plays run or more. This was shocking for the Bears to say the least, after having such high hopes going into the game.

“We had Ben Musselman go down earlier this week. Trevor Arnett was able to step up and played amazing. We had a chip on our shoulders from the last few years,” said Coletti.

For the Lancers, the run game also had its share of struggles. Star backs, McClure and Brady Domroe combined for only 163 yards and 3 touchdowns. Half of the Lancers’ scoring drives started out on Oakdale’s side of the field, which would come from big punt returns and turnovers.

“They lost a lot of weapons from last year, so we knew that it wasn’t the same team. As long as we could shut down Reifer and Carey, we knew we could win the game,” said Coletti.

Coming up on Friday October 4, the Lancers (4-0) will face the Walkersville Lions (4-0) for the Lancers’ homecoming game. Going into this game, the Lions earned a win after Governor Thomas Johnson High School shut down their football program due to loss of players. The Lancers won last year in a 35-0 shutout after the Lions lost their main weapon, running back Jacob Wetzel.

“We have to be able to stop their run game. This year, they’ve been able to throw the ball with more success with their quarterback and wide receivers. We’ve got our hands full this week,” said Coach Rick Conner on what he’s notcied about this year’s Lions team.

The success in the pass game is thanks to quarterback Andrew Stroka, who has shown signs of improvement throughout the season, especially in his game against Tuscarora.

The homecoming game this year will be very interesting to watch. Make sure to follow @Jason_Byrd2021, @linganorefb, @LHSJournalism, and @FrederickSports to get the latest football coverage.