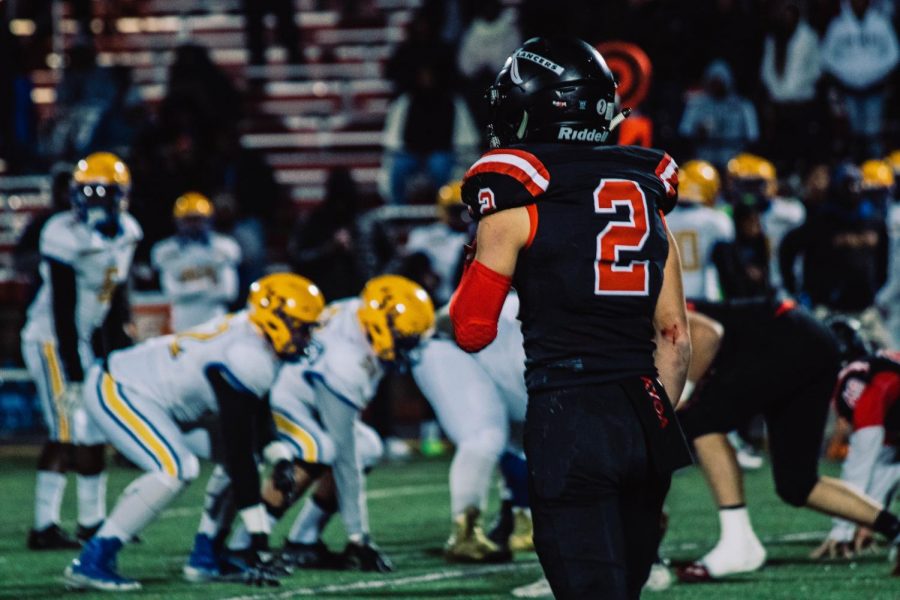 Cornerback Johan Samayoa lines up for the next defensive play against Mervo.

Another huge fourth down stop sends Lancers to States

“I knew what route he was going to run and I knew where the first down was. I was able to make the play and were now we’re headed back to states” said Domroe, as his teammates chanted his name coming off the field.

Coming into the game, no one was exactly sure what the Mervo Mustangs had ready. But to some surprise, the Mustangs turned what people thought was going to be an easy win into a very challenging game. One of those challenges was running back Jarrett Gasque, who ran for 166 rushing yards and a 59-yard touchdown, splitting the defense and and outrunning the secondary.

Quarterback Kelin Kimbrough had his struggles and his moments, where he threw for 8/20 with 120 yards, a touchdown and 2 interceptions, coming from Ryan Barthlow and Joey Bruscia. Many of his incompletions and Barthlow’s interception led to Lancer scores. Two huge scores for the Lancers came from Joey Bruscia to Matt Schiller, the second touchdown would be the go-ahead score that put the Lancers over the Mustangs.

The Lancers will return to the 3A State Championship game for the third year in a row to play Bryan Bresee and the Damascus Hornets (11-2). The game takes place at the Navy Marine Corp Memorial Stadium in Annapolis at 7:00 p.m. Make sure to follow @Jason_Byrd2021, @linganorefb, @LHSJournalism, and @FrederickSports to get the latest football coverage.