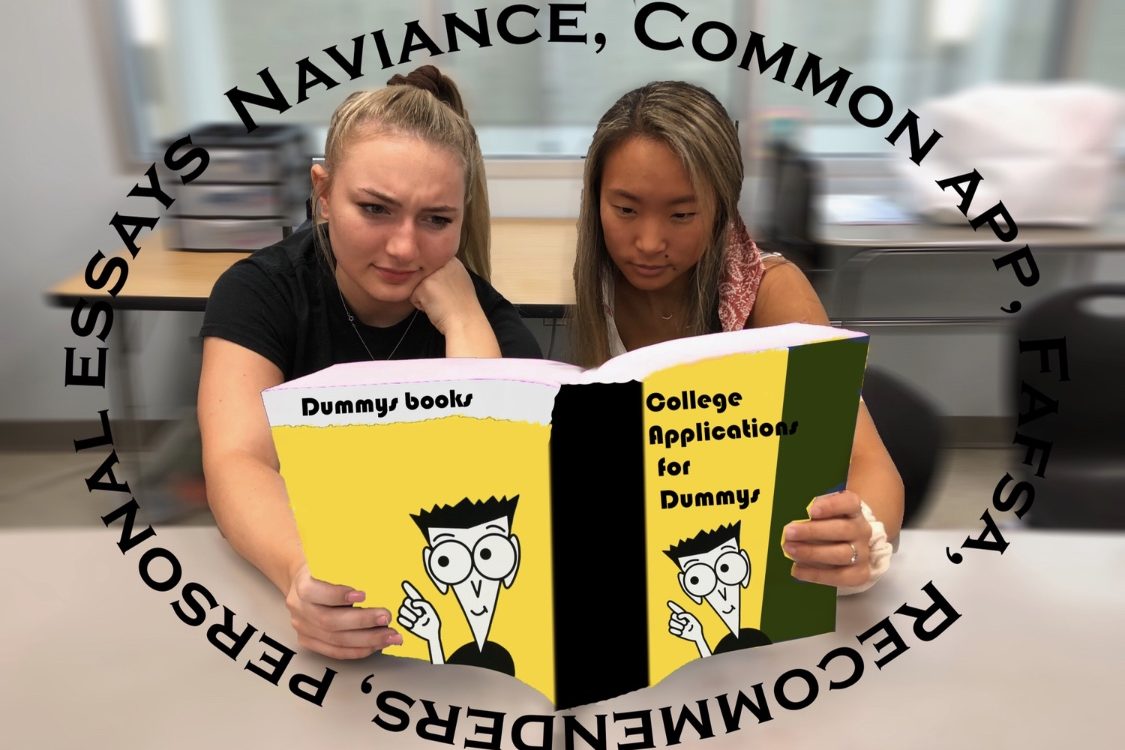 College applications: We don’t know what we’re doing, do you?

by Alaina Burger and Grace Gaydosh

November 1:  The dreaded college application deadline.  Maybe you’re lucky, and the college you are applying to has a deadline of December 1. Seniors are feeling the pressure.

Procrastinating is easier. Just don’t even start the process. That’s where many seniors are today.

The entire experience would be much less miserable if we had some clear and regular guidance starting at the beginning of senior year.

After talking to other high schools, private and public staff and students, we have some common sense ways that changes could be made to improve communication at Linganore.

Some students are stuck at “square one.”  They don’t know the difference between Common App and Coalition, whether or not they should waive their FERPA rights (it’s a good idea to do that), or even how to write good personal and supplemental essays.

Arya Vahdatshoar, a senior at Glenelg High School in Howard County, said, “My school had this thing called ‘Gladiators’ Skills for Success Day’. Juniors were taught about preparing for the SAT, and seniors were told everything they needed to know when applying to colleges.”

While the college platform that FCPS students use, Naviance, does offer some insight to confused seniors, Linganore doesn’t really have anything in place during the school year to immediately give students helpful application information face to face.

Some students try to get ahead of the game by starting their applications early. While school counselors are available during the summer, their main focus is fixing students’ schedules and preparing for the coming school year.

“I applaud students for getting a head start, but we aren’t ready for college applications during the summer,” said school counselor, Mrs. Renata Emery. In their defense, few students are working on applications in August anyway.

How can we fix this issue?

“When students understand what college essays add to their application and they’re open to constructive feedback from instructors, they write good college essays.” ”

The Gilman School, an all-boys private school in Baltimore, held application workshops during the last few weeks of summer. In only four days, they help students finish the hardest part of applying to college, the dreaded essays. The class costs $300, and students needed to provide their own transportation. Alaina Burger took this class and finished her essays in August, before the stress of school.

The Gilman School’s main focus for the workshop is to alleviate the stress of college applications by beginning the process of drafting essays over the summer under the guidance of college counseling professionals.

“Students get out of the essay workshop what they put into it,” said Gilman School counselor, Justin Baker. “Most students work studiously throughout the course to brainstorm, draft, and revise–when students understand what college essays add to their application and they’re open to constructive feedback from instructors, they write good college essays.”

This gives students a chance to write a good essay, if they’re willing to put in the effort.

Full disclosure, Burger did not want to attend the class at the Gilman School.

“Alaina was reluctant to attend the class since it would take up so much of her last week of summer, but in the end she could see how far along she had gotten in the college application process in such a short period of time,” said Alaina’s mother Wendy Kerr.

Providing an essay writing workshop, at no cost, would help Linganore seniors. In a Lancer Media Twitter poll, 48% voted for an in-school workshop to go over college essays.

English teachers Mrs. Patricia Kolias and Mr. Daniel Lake agree and would like to implement a workshop during October to meet the demand. Originally, they wanted to do a workshop over the summer for both SAT preparation and college essay writing; however, Kolias and Lake could not work out a time that fit both their schedules.

“Early action deadlines are getting closer and closer,” said Kolias. “It would have been beneficial to have a workshop over the summer, but since it did not work out we are trying to set it up for the first week of October so that it meets all college deadlines.”

We feel that an optional in-school workshop in October could be beneficial to students applying to college. This workshop would be held during PREP on a series of days and would teach students how to write personal and supplemental essays as well as what to write and what not to write.

In order for this to work, it needs to be a school-wide effort to improve the process with English teachers, counselors, and administration all equally involved.  The biggest buy-in, though, has to come from students to take advantage of the expertise.  A second consideration is the uncompensated time that teachers will be expected to contribute above and beyond their already busy workday.

“If we have teachers who are willing to work with students, we can find a place for that workshop to occur,” said Assistant Principal Mr. Andrew McWilliams.

Last year, the English department sponsored Writer’s Week, during which students could bring essays to PREP or after school.  It wasn’t a big draw, possibly because it was in December, when many deadlines are already past.

Parents could play a huge role in persuading reluctant students to take this workshop. LHS Find Out First notices and the weekly email, Lancer Lines, help bridge the student-parent divide. There is a delicate balance between the independence expected of a student who is applying to college and the encouragement of a parent who wants to nurture future success.

Students need to learn how to “sell themselves”. They need to know how to write to an admissions counselor, not how to write a book report.

It could give students more insight from another set of eyes and make them feel more motivated to get their work done.

Kolias pointed out that while there is an SAT prep unit in the English 11 curriculum, as well as an optional college application unit, there should also be a bigger emphasis on personal essay writing.

College applications are crucial, so creating a support system at Linganore could go a long way. Whether the student is set on a specific college, or they just need a few pointers on their essay, this workshop could be productive for students who need an extra push.

It could be somewhere where students can sit down, pull out their Chromebooks, and just write. No distractions, and no procrastination.