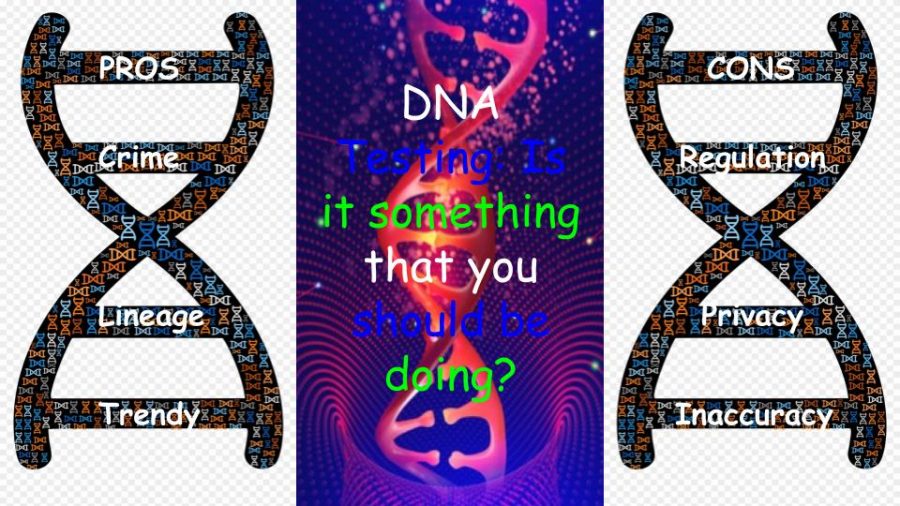 by Ethan Hart and Delaney Cabe

DNA tests satisfy curiosity and answer “Who am I?”

I recommend getting your DNA tested because it is a fun and exciting experience for you and your family. You can settle your curiosity about your ethnicity, traits, health, and much more once you take the test! Taking the test also might give you a sense of belonging and what you are.

Teenagers are interested in a sense of identity and want to answer the question “Who am I?”  Being able to take a DNA test, helps to shape that. Teenagers are getting more curious as to what their future would hold based on the traits and health found in their lineage.

Some celebrities such as Snoop Dogg, have taken a DNA test in the past. Snoop Dogg thought that he was only Sub-Saharan African, but his DNA tests came back as him only being 71% Sub-Saharan African. The rest of his DNA results consisted of Native American and a little bit of European.

People who have had difficult histories such as African American slaves and adoptees: it would help them to learn about themselves and to be able to make more connections. It would be more likely for them to take a DNA test because there is much more for them to discover rather than an average person, already having a hint of what ethnicity they are apart of.

DNA testing has helped many people who have been wrongly convicted, to be sent home. One victim who was wrongly convicted for a mass murder, had been on death row for 30+ years. A series of people involved in a case such as the scientist, planted evidence that would result to Anthony Hinton’s execution.

I had my DNA tested in January, 2019. I asked for a DNA test for Christmas because I was curious and I didn’t care if my DNA is private or not. The results came back quickly. My results came back with almost half of my ethnicity being from Northwestern Europe and a quarter of it being from Eastern Europe. My cousin who came to New York from Russia also had her DNA tested. Her results came in as having a full ethnicity of Eastern European. She used a different website than I did which was MyHeritage. Which of these companies are more accurate?

My DNA results do not surprise me much because my mom has told me that my family originated from England, and my last name (Cabe) is also Scottish. My great grandmother is also from Russia, so the Eastern Europe part does not surprise me as well.

Ancestry.com is the most popular because it is the most advertised among the different DNA websites.

One of the DNA tests can detect a few diseases such as celiac disease, Parkinsons, and Alzheimer’s disease. 23andme might be able to detect the disease, but the accuracy of the test doesn’t declare if you will or will not get the disease. There is still a possibility of getting it and not getting the disease.

What do you think about the DNA testing? Tweet at us @LHSjournalism!

DNA testing can be inaccurate and encourages secret surveillance

DNA testing, as cool and trendy as it may be, simply isn’t regulated enough to be well worth the risk. Having the right to privacy is fundamental, and protecting it is much more important than wasting money and time to risk the leak of your information without consent. As we venture further into an age where information has become increasingly private, how much is too much to know?

DNA does show one’s cultural lineage through generations. This result of DNA testing is interesting enough, but doesn’t apply the same interest to everyone. My sister Lillian Hart, who was adopted from China when she was only one year old, has accepted my parents and I as her complete family, and doesn’t have any interest in the history of her birth parent’s lineage.

How worth it is submitting your DNA to these online companies? FamilyTreeDNA, which is one of the most popular at-home DNA testing businesses, admitted in early 2019 to sharing genetic information with the FBI. They made their files of more than 2 million DNA samples available more than a year ago for the FBI to carefully comb over and observe to solve unsolved murder and rape cases.

This is familiar across multiple sites, which is a dangerous privacy threat. Websites 23AndMe and Ancestry.com also were subject to releasing information to the FBI in the case of the Golden State Killer. In an article written by Aja Romano for Vox, local and national officials, “Searched family trees generated through the public profiles, looking for plausible leads.” Thousands of innocent DNA samplers who just wanted to submit their information for plausible innocent reasons had their private data studied and analyzed by law enforcement without clear regulation.

These businesses have not been transparent with their users about the potential use of their DNA. DNA testing companies like FamilyTreeDNA, who have worked with the FBI, did not explicitly tell their users in their terms and conditions that this was possible. In an interview with the New York Times, New York University Professor Erin Murphy said, “Even if you were reading all of your spam email about all the privacy changes, did you get one that says you have agreed to be the F.B.I.’s testing lab? No, they did not issue that.”

If your information is potentially available to be given up to the government without your consent to see, why risk making it accessible in the first place? Zeller believes that DNA should be treated as sensitive information. “Specific genetic information such as that provided by DNA testing should be kept as private as all of our health information—only shared with a patient’s consent.”

Even though DNA testing can provide some benefits as to learning about genetic health information, the results are not always as concrete as they seem. National Institute of Health scientist Eileen Zeller said, “While test results can tell you if you possess a DNA variant that is associated with a higher risk (of a disease), it doesn’t mean you will ultimately succumb to a particular disease or condition—so the test result is not a definitive diagnosis.”

It is baffling to me why more DNA testing laws aren’t in place like other medical health privacy laws between doctors and patients. In medicine, The Privacy Rule, which is a federal law, says that your health information is under your rights of protection, and only a limited number of people can see it. In comparison, DNA information, once given to websites, can be freely examined by a countless number of people. There must be regulation in this business before customers can knowingly trust the employees who handle this sensitive information.

What do you think? Should you test your DNA, or should you avoid it? Comment below your thoughts, and mention us on twitter @LHSJournalism!