"I realize that I get to know people truly for what they are. That is a gift." Tommy Edison, radio personality and blind film critic

by Alaina Burger and Grace Gaydosh 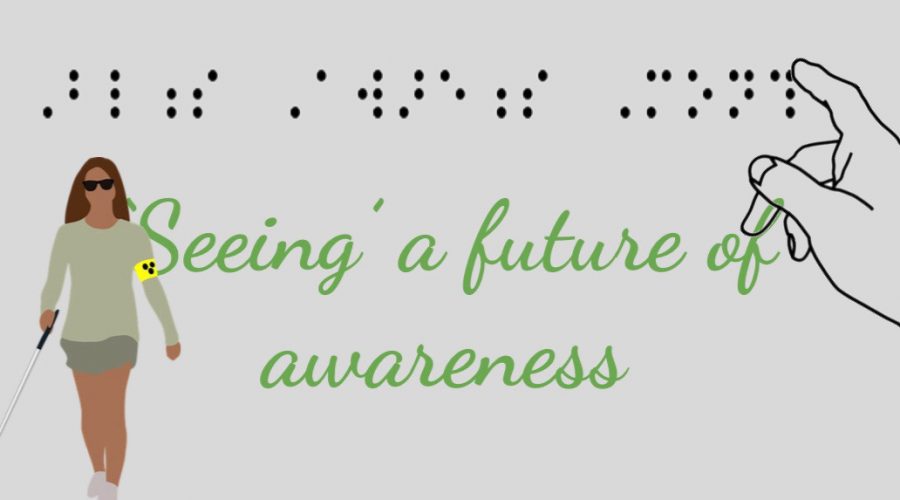 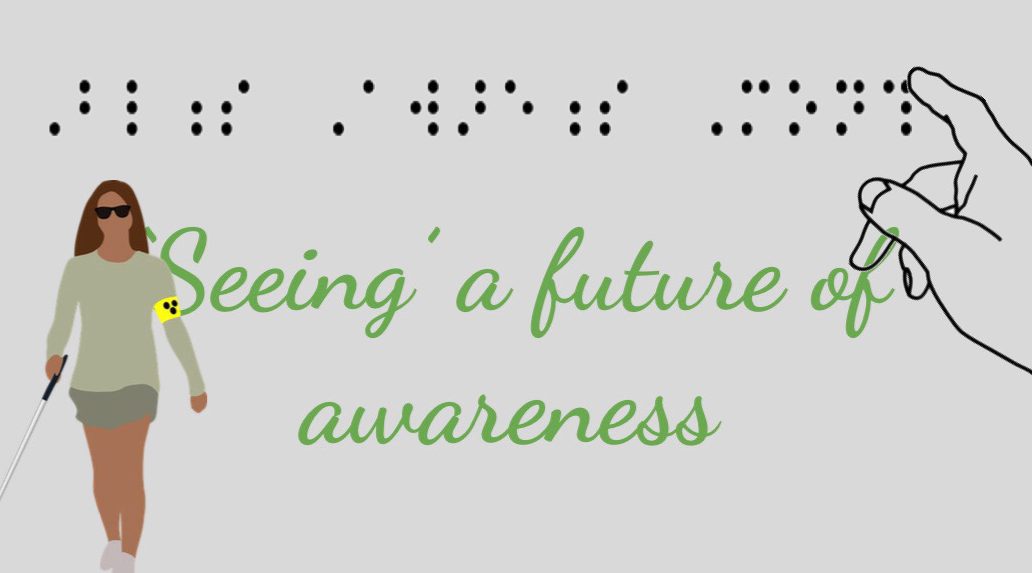 The short URL of the present article is: https://lhslance.org/nsr15

There are 285 million people worldwide who are visually impaired, and 39 million are blind.

October is Blindness Awareness Month, and World Sight Day was on October 11. You probably didn’t know that, and it’s okay–we didn’t either. But that’s the problem: we can’t ‘see’ blind people, but we need to recognize and be more aware of people who are blind or visually impaired.

Summer 2019, senior Juliana Zeller volunteered at the National Cancer Institute in Frederick for Take Your Child to Work Day. She was in charge of a station that focused on teaching children simple braille using a machine to type it out on paper.

The braille activity exposed the children to a writing system they may or may not have known existed and allowed them to use this new form of communication to create a keepsake to extend what they learned.

Zeller became interested in learning braille when she was younger because she had neighbors who were visually impaired. While she doesn’t know braille well, she had some background knowledge before going into the camp.

“People should learn braille because it can better kids’ understanding of communication, and I think Linganore should have an optional braille class. ASL is already very important for communication with the deaf, and I feel like blindness [awareness] is really underrepresented in society,” said Zeller.

The National Federation of the Blind, located in Baltimore, works with blind and low-vision individuals. They offer many programs and services that assist the blind and visually impaired and celebrate Meet the Blind Month every October. Throughout October, members put together a variety of activities in their communities. Many of the activities occur on White Cane Awareness Day on October 15.

Blindness awareness isn’t just about the importance of braille. It also means understanding that those who are blind can live their fullest lives, just as well as sighted people.

Many students’ only encounter with blindness may have been with Christian Howard, a 2018 graduate and current student at Liberty University, who is completely blind. In high school, Howard was active in the drama club, run by Mrs. Angela Smithhisler. He acted in many school plays, including: Footloose, The Giver, The Addam’s Family, and more.

During his senior year, Howard directed The Seussification of Romeo and Juliet. He had a second student director who assisted him with blocking, and he would memorize how many steps he had to take to cross the stage whenever he performed.

“Christian always impressed me as he never let anything hold him back from being successful. He worked hard and always gave 110%. Some people went years without even knowing of his blindness,” said Smithhisler.

Angela Dillon, a special education teacher, worked with Christian, as well as with many other FCPS students with visual impairments.

“What I enjoy most about my job is helping students achieve to their highest potential. I enjoy seeing my students do well,” said Dillon. “With new technology, my students with visual impairments are able to do work alongside their sighted peers; whereas, ten years ago it was more challenging. I love that technology is helping our students with visual impairments become more independent learners.”

Raising awareness is necessary in our local community as well. Online, the YouTube community already seems to be on the right track.

The Tommy Edison Experience, a YouTube channel run by Tommy Edison, focuses on answering all of the questions a sighted person may have about blindness. Edison was born completely blind due to an underdeveloped optic nerve, and uses his blindness to raise awareness online.

Edison is a radio personality and blind film critic, known for his sense of humor. He reviews movies based on their script, music, and sound effects. On his YouTube channel, Edison covers a variety of topics such as: “Do Blind People Turn Their Lights on at Home?” and “How Do Blind People Tell Time?”

“I never knew this as a child; however, as an adult, I realize that I get to know people truly for what they are. That is a gift. In other words, I am not distracted by looks, status, any of that kind of stuff. I get to enjoy people for exactly who and what they are,” said Edison in a Lancer Media interview.

Molly Burke, another YouTuber, is raising awareness as well. Burke suffers from Retinitis Pigmentosa, a rare retinal disease that causes loss of vision. Besides being a YouTuber, Burke is a motivational speaker, author, and commercial model. Burke began public speaking at five years old as an ambassador for Fighting Blindness Canada. Since then, she has brought hope to many people.

Like Edison, Burke’s YouTube channel focuses on raising awareness and answering questions. She openly shares her experiences overcoming adversity and hardships, connecting with her audience at a deeply personal level. Her goal is to educate and motivate others to find happiness and achieve their goals, even if they are going through hard times.

Not many people are educated about blindness and visual impairments, and not many people understand. It can be easier to avoid a visually impaired person rather than reach out and make friends. Tommy Edison and Molly Burke truly help to increase awareness, and the ability to understand others who may do things a little differently is an important skill. People are quick to make assumptions about what they cannot understand, and we hope to shed some light on a subject that is underrepresented in our society.