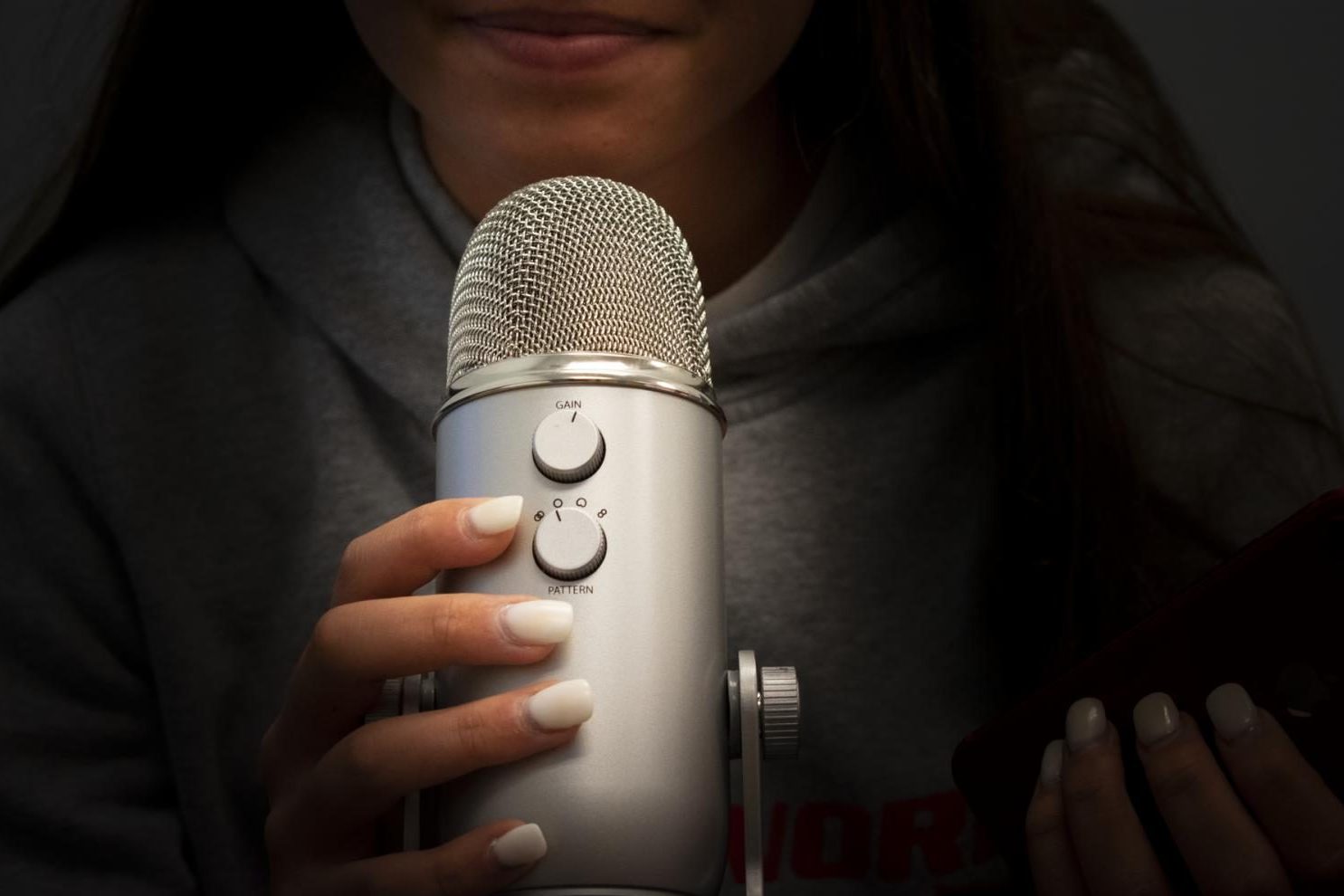 Bailey Bennett jumps on the ASMR trend by making her own video. Check it out on the Lancer Media SoundCloud page! (Bailey Spore)

ASMR: Love it or hate it?

by Bailey Bennett and Gabby Llewellyn

For those who experience ASMR, a ‘tingling’ sensation is felt, and can be relaxing and therapeutic. It can assist restless individuals in falling asleep at night. ASMR is also used to produce a calming effect and entertain.

Personally we enjoy ASMR as it soothes our sensory needs. Both of us enjoy listening to whispering and eating ASMRs the most. For us, ASMR is entertaining and a good way to relax before bedtime. We watch ASMR an average of once a week, depending on our needs.

In a study of 425 individuals who experience ASMR, all reported moods increased while watching ASMR triggering videos.

In people who experience ASMR, the origin of the ‘tingling’ sensation starts in the center of the head and moves down their neck and throughout their body.

According to Discover ASMR common triggers for ASMR include whispering, crisp sounds, and repetitive noises. Other noises that people can enjoy are eating noises, tapping sounds, and crunchy sounds. These can be seen in thousands of videos with millions of views. ‘ASMRtists’ preform ASMR in video or audio for their viewers. Popular ‘ASMRtists’ include @zachchoi, @_yomi999, and @kimlizasmr on Instagram. As well as “Gibi ASMR,” “Life with Mak,” and “ASMR Darling” on Youtube.

While writing this piece we decided to become ‘ASMRtists’ for a day and create a podcast of our own. Below we listed the noises made in order.

Over the past decade, the Internet has given birth to many odd trends: planking, the Kylie Jenner lip challenge, the Pokemon Go craze, and the ALS Ice Bucket Challenge. We all want to do what is trendy. But this new trend? Yuck.

In recent years, a new trend has taken the world by storm: ASMR. The term, coined in 2010, stands for a phenomenon called Autonomous Sensory Meridian Response. This phenomenon is defined as “an experience characterized by a static-like or tingling sensation on the skin that typically begins on the scalp and moves down the back of the neck and upper spine.”

Some love it, some hate it. I am part of the “hate it” crowd. Rather than warm tingles, as described by ASMR supporters, I experience uncomfortable cringing.

All over social media, specifically YouTube, ASMR videos are going viral. The makers of these videos, dubbed “ASMRtists,” post intimate videos with “triggers” such as tapping, fabric crumpling, whispering, and chewing. The “art” has branched out to even more exotic forms: soap shaving, slime poking, and cutting through styrofoam. (Just the thought of cutting styrofoam makes me queasy.)

Although ASMR is different in every video, there are some similarities. In many, the camera is extremely zoomed in and focused on the person’s mouth and torso. Additionally, most ASMRtists use high-tech microphones (similar to microphones podcasters use) to get the best sound quality possible.

While supporters enjoy the close-ups and crisp sound quality, these two features are uncomfortable and weirdly intimate.

Sophomore Lexi Cioffi said, “I think it’s disgusting, and it makes me uncomfortable.”

“No one wants to see you eat,” said sophomore Alex Dembeck.

Sophomore Adam Liston said, “It makes me very uncomfortable, especially the whispering ones.”

“I think it’s weird that some people are reliant on ASMR. It makes me uncomfortable; I get the same reaction when I hear nails on a chalkboard,” said junior Katie Brengel.

These opinions may have some factual support to them. According to researchers, using ASMR as an attempt to aid sensory processing disorders can lead to attention seeking behavior in children, which is sometimes more difficult to reverse. Additionally, when children create a habit of relying on ASMR to focus or sleep, it can cause an unhealthy dependability.

The validity of sound therapy cannot be discounted, but this new wave of ASMR is straying further away from sound therapy and more towards creepy entertainment. This is similar to what happened with the ALS Ice Bucket Challenge that went viral in 2014. It began as a genuine effort to raise money and awareness for sufferers of ALS, and, although money and awareness was raised, it quickly turned into millions of people dumping cold water on their heads for no reason other than to follow a trend.

In addition to ASMR’s purpose changing, it has also been heavily satirized as it has gained popularity. For every few legitimate ASMR videos or podcasts, there are videos that mock them. Popular YouTubers, news outlets, and even television stars like Ellen DeGeneres have poked fun at the trend.

Lancer Media did a Twitter poll to see how the public felt about ASMR. We asked our community, “Do you like ASMR?” The results were heavily in favor of “no” with 78% of the votes; 13% of voters said they did not mind ASMR; and a shockingly low 9% of voters said they liked ASMR.