The varsity and JV field hockey teams made black melanoma inspired shirts using a reverse tie dye technique. This left an outline of a black ribbon. The team also used a bleach pen to write encouraging messages on the shirts. (courtesy of Shane Rossman)

The varsity and JV field hockey teams made black melanoma inspired shirts using a reverse tie dye technique. This left an outline of a black ribbon. The team also used a bleach pen to write encouraging messages on the shirts.

The short URL of the present article is: https://lhslance.org/8wlgx

If only we could bleach away cancer like we can bleach a t-shirt.

On October 12, during a tied game, where varsity would go on to beat the Tuscarora Titans 1-0, fans from both schools focused on a more important contest, beating cancer.

“There we were in a 0-0 game at halftime, but all of that disappeared when we all came together to honor those affected by cancer,” said Tuscarora Head Field Hockey Coach Julie Lunn.

The varsity and JV teams were wearing hand-made black t-shirts, made with a reverse tie dye technique. Weeks prior to the game, they taped a cutout of a ribbon to the shirts and sprayed them with bleach, creating an outline of a ribbon. Encouraging messages accompanied the ribbon on each of the players melanoma inspired shirts.

The field hockey team raised money for the Caring Bridge organization and the Sidney Kimmel Comprehensive Cancer Center at Johns Hopkins Hospital to fight against cancer.

During halftime of the varsity field hockey game, a teary-eyed crowd looked on as two survivors and the family of a past cancer fighter were honored. 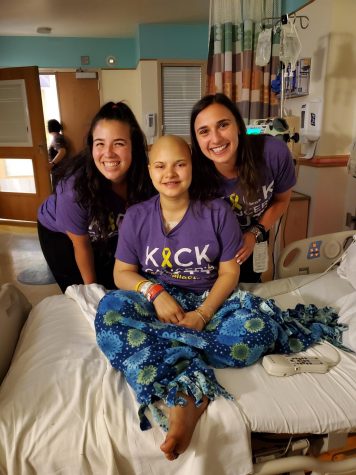 Debbie Ridgely, a field hockey parent, first introduced Danielle Hankey. Hankey is a field hockey player on the Tuscarora team who was diagnosed with Ewing’s sarcoma in March 2019.

“Danielle is just a pleasure to be around. She has such a sweet demeanor. But on the field hockey field she is a competitor. She is a true leader on the field but beyond that, she is willing to help anyone that needs it,” said Lunn.

On February 15, 2019, Hankey experienced excruciating elbow pain and could not fully straighten her arm. Although doctors initially gave her antibiotics for an infection, her mother felt as though something else was wrong. Following her instincts, Hankey’s mom, Wendy Hankey, was referred to Children’s National Medical Center where they received news that would change their lives forever: Danielle has a rare bone cancer.

“We were completely devastated when we found out that Danielle had cancer. We were scared and confused. I can’t put into words how I felt,” said Wendy Hankey.

Danielle was plunged into eight rounds of chemotherapy and 21 days of radiation therapy, but the tumor did not decrease as expected.

On September 3, Danielle underwent surgery to remove the tumor, tissue, and a portion of her ulna. Danielle continues to receive chemotherapy treatments to ensure all of the cancer is gone.

“It is so important to spread awareness about this disease because there is not enough research or funding for these types of cancer. They are most prevalent in children and are devastating.  There have not been any innovations in treatments since the early 1980’s. We need to fund research and develop new treatments.  The treatments available now have many side effects, one being secondary cancers. That is terrifying,” said Hankey.

Lancers are familiar with Ewing’s sarcoma because recent graduate Lily Weaver has battled the disease since middle school.  The school and community have rallied around her family to encourage her and raise money for the fight.

courtesy of Shane Rossman
Linganore graduate Steve Wilhelm stands with his family as he receives a reverse tie dye shirt with players signatures on the back.

#GetNaked promotes melanoma awareness by encouraging people to schedule monthly skin checks. These skin checks can reveal unusual spots and catch something potentially life-threatening early, which can make all the difference.

In May 2007, Wilhelm was diagnosed with Stage II melanoma. The tumor was located on his calf, but a surgery removed it, and he was cancer-free for seven years.

In 2014, however, Steve was diagnosed with Stage IV metastasized melanoma. Over the course of five years, Steve has undergone three surgeries, immunotherapy, radiation, two blood clots that resulted in him being on blood thinners for life, and chemotherapy drugs.

“My chance of relapse was less than 5%. Then I found a lump in my left groin area that felt like a marble. After seeing my oncologist and getting a CT scan, we found an enlarged lymph node. Once again the whirlwind of appointments and procedures began. After a needle biopsy, we found that the melanoma had moved internally and was now stage three. I had an inguinal lymph node dissection surgery, which was the most painful thing I ever had to go through. My wife had to help me stand up and walk. This was followed by six months of physical therapy. After this, I had blood clots and relapses again with the stage four melanoma now in my liver, and tumors in my back. I was able to take a newly FDA approved immunotherapy drug by IV that did reverse the growth of the tumors for a short period of time; however the immunotherapy almost killed me because my body developed autoimmune diseases that affected my liver, lungs and joints,” said Steve Wilhelm.

“My husband’s melanoma diagnosis has changed our family in a positive way. We know family is most important and to put our family first, as we don’t know how much time we have here on earth. Steve especially doesn’t want to have any regrets and he wants his kids to have positive and powerful memories of him if his life is cut short,” said Cindy Wilhelm.

His last surgery was in August, and he is required to continue his chemotherapy for another six months.

“I feel cancer awareness is so important because if you catch it early, it increases your chances of beating it. I hope that people learn to trust what their body is telling them and to be an advocate for themselves when they visit the doctor when something is off,” continued Wilhelm

Although this is a very difficult time, he is often the loudest voice in the stands, supporting his wife and daughters, Paige and Carmen.

JV coach, Charlotte Landahl knows what the Wilhelm and Hankey families are experiencing. 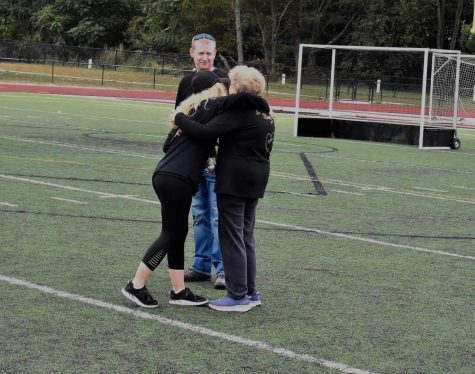 Charlotte’s mother Bonnie Reitz, brother Allen Reitz, and the Landahl family were welcomed to the field in honor of John Reitz who passed away from melanoma cancer in 2015.

John was diagnosed with melanoma in October of 2014.

“Finding out [my dad] had metastatic melanoma was the most crushing thing we all have ever had to go through. We are a very close family and supported each other the whole way through. I imagine we are stronger for it, but certainly still feel the void he left in our family.

After the diagnosis, honestly it was hard waking up each day knowing the end was so near.  He literally had cancer in every part of his body… brain, back, lungs, heart… you name it.” said Landahl.

His life impacted many in the community. He was an educator who was passionate about working with his students and the community of East Rochester. He easily touched the lives of every student, parent, and staff member he came in contact with.

John was awarded the “Man of the Year” award from the Rochester YMCA for his work with his students. He was invested in every person he met, which is probably why he could be found coaching any and every sport.

John’s wife, Bonnie Reitz, his son, Allen Reitz, and his daughter and JV field hockey coach, Charlotte Landahl, joined the survivors on the field to be honored for their husband and father’s extraordinary fight against a disease that affects so many lives.

Donate to the search for a cure and support each individual through their GoFundMe pages or through the Caring Bridge organization and the Sidney Kimmel Comprehensive Cancer Center at Johns Hopkins Hospital. Any contribution makes a difference.

In a world of competitive sports, it is easy to feel as though you are against the competing team; however, we are all connected and united against the real competitor: cancer.