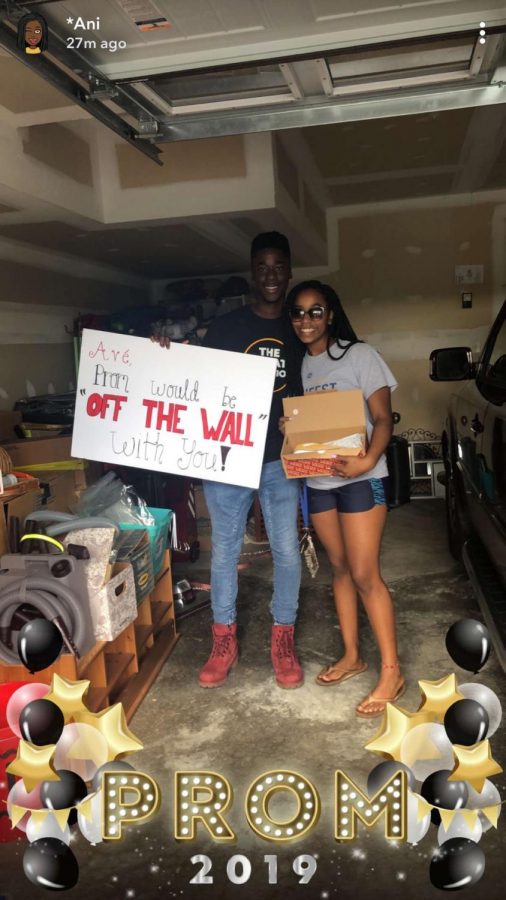 Kojo Benefo and Ave-Boghossian James posing for a cute picture with their unique promposal sign.

Promposal Pandemonium: If the Shoe fits? … Ask her to Prom

With only 12 days until prom Kojo Benefo asked his best friend Avé Boghossian-James to prom using a pair of yellow Vans and a cute sign saying “ Avé, prom would be off the wall with you!”

Benefo collaborated with Boghossian-James’s friends, Lizzie Hall and Katie Johnson in order to pick out the perfect way to ask her. He eventually decided on her favorite colored shoe and used the popular Vans logo to come up with a clever pun. Benefo waited at Boghossian-James’s home, and she was very surprised as she arrived home. This promposal was special to Boghossian-James because the shoes are something that can always remind her of her Junior prom with Benefo.

Boghossian-James said, ” I’m very excited to go with Kojo he’s been a close friend of mine since freshman year and I can’t think of anyone else I would like to go with.”

The couple have been best friends since freshman year and made a pact that if neither one of them had dates, they would go with each other. They followed through with the four-year promise.

Benefo said, “ We have always been very close and I am very excited to go prom with someone I care about as much as her.”