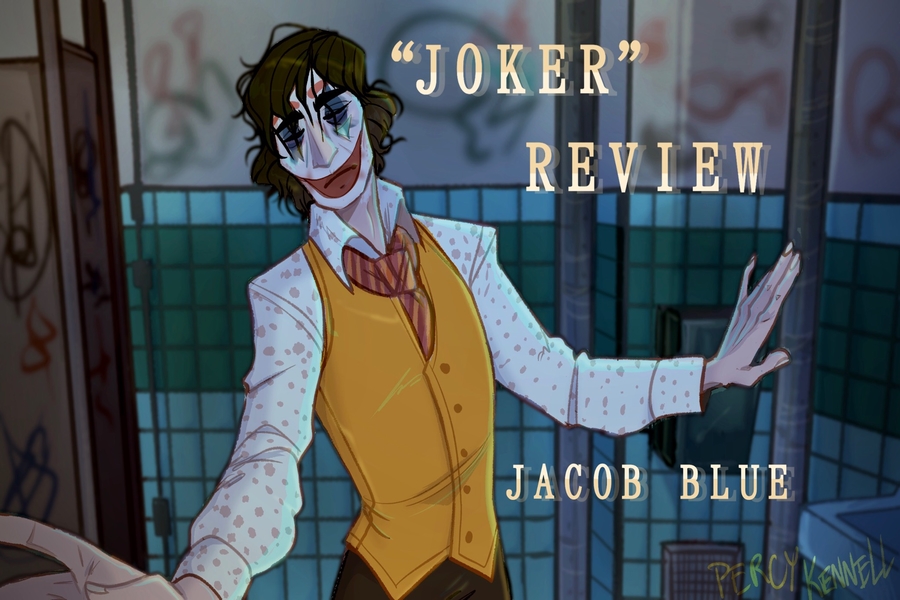 ‘I used to think my life was a tragedy, but now I realize, it’s a comedy’ – Arthur Fleck (Cartoon done by Percy Kennell (@peachimera))

‘I used to think my life was a tragedy, but now I realize, it’s a comedy’ – Arthur Fleck

Put on a happy face and go see Joker

“One may smile, and smile, and be a villain. ” – William Shakespeare in Hamlet

What makes a character truly iconic? With a character like Hamlet, the interpretation of the character’s motives and actions can be done a thousand times over and still convey a certain respect for the original source material while also allowing the actor to put their own interpretation into the performance. It makes sense for a character like Hamlet to have this open ended effect of emotion to pull from, but for a character like the Joker, the range of variation an actor can bring to their performance increases with every adaptation. In Hamlet the tale of a tortured  young soul driven out by his family leading to the tragic ends of those who have wronged him has very strong similarities to the tragicomedy of a fallen clown presented in 2019’s Joker.

The Joker is one of the most infamous comic book villains to ever leap off the printed panels. His origins haven’t really been explored too deeply, keeping his madness in an unrealistic state of fiction. When people read a comic and see the Joker blow up a hospital in the latest issue of Batman, we don’t take into account just how horrible this singular action is.

Then he’s kidnapping a bus full of cheerleaders on the next page. This lack of breathing room makes it hard to pick apart the rich psyche of this mass murder, by never being sure what he’s going to do next.

The comic The Killing Joke shed some light on how the Joker became who he is, but has never been a source of media solely driven with showing his descent into madness. Even giving the audience a sense of empathy for a megalomaniac.

Set in 1981, Joker deals with poverty, trauma, humiliation, and mental illness. Our “protagonist” Arthur Fleck lives in Gotham with his mother and is a striving comedian who works part time as a clown until he’s fired after accidentally bringing a gun to a children’s hospital. We see Arthur beaten down physically and mentally by the society he tries so desperately to co-exist with. His only desire is to be  noticed, and in a world of selfishness and alienation Arthur struggles every day just to put on a happy face.

This is a uniquely relevant theme for an American audience obsessed with “likes.”

A brain injury that wreaks havoc on Arthur’s life is this uncontrollable laughing which erupts during the most appropriate instances. Even though the illness was never given a name, it is based off of the disorder called the Pseudobulbar Affect. This rare disorder is a type of emotional disturbance depicted by uncontrollable episodes of crying or laughter. The crying or laughter may begin when witnessing a stressful situation or hearing a mildly amusing comment. The outburst can be difficult or even impossible to stop at times.

The Joker’s laugh is one of the most iconic sounds in comic book and film history. Actors who have portrayed the Joker like Mark Hamill, Heath Ledger, and Jack Nicholson have all put their own spin on the laugh. Adding this extra layer of pain to the laugh by associating it to this real world disorder adds a level of discomfort and misery to Joaquin Phoenix’s outstanding performance.

Arthur’s struggle to subdue his psychotic tendencies is tested and broken after getting into an altercation with some drunken Wayne Enterprises employees. After the employees harassed a random woman, causing Arthur to erupt into his terrifyingly  painful laughter they harass him. As an act of self defense, Arthur pulls out his gun and open fires upon the drunks.

The key transformation, the restroom scene, was actually altered during the first day of shooting it. According to an article in CinemaBlend, originally Arthur was to hide the gun and look frantic. Director Todd Phillips and Phoenix weren’t big fans of this, saying it didn’t line up with how Arthur would be feeling at the time. He didn’t feel bad about killing. He liked it. Philips then played some of the film’s music, composed by Hildur Guðnadóttir to find something for Phoenix to draw from. Phoenix then started to do this hauntingly angelic dance to the discomforting cello-led theme, and in that moment both of them knew that this was the scene.This impromptu decision defines his character.

From this point on, Arthur’s sanity is stretched and mangled as he learns of his true origins and forgotten traumas. After the murders, Arthur gets what he has always wanted, “followers” donning clown masks and protesting upper class events. He has unintentionally started a movement of anarchy, and is finally starting to feel like his life has a purpose. With every murder he sinks into insanity until he as become, Joker.

The Icelandic composer Hildur Guðnadóttir, who has previously won an Emmy for her work on the HBO series Chernobyl, Gudnadottir’s solo eerie cello will be remembered like other horror moments like the shark approaching in Jaws and the shower slashing in Psycho.  The humanity and sorrow that Guðnadóttir brings in her music adds to the empathy film inspires for this famous villain, expressing her darkness through her music.

The cinematography enhances the story by showing Arthur’s progression into madness. Cinematographer, Lawrence Sher, who previously worked on Godzilla: King of the Monsters, wanted to show that as Arthur becomes more isolated from the rest of Gotham, his sanity slowly drips away.

In a podcast from News Shooter, Sher talked about how Arthur being boxed into a society that resents him is shown early in the film through  many close-up shots, as well as Arthur being packed into areas with large crowds. A large style used heavily in the 40’s which is very prevalent here is the use of lots of mixed colors. Not cleaning up the light leads not having it be color corrected within the film stock. They did this by going out onto the street and filming. Doing this allowed for the sodium vapor oranges of the street lights to mix with the cool fluorescence of the night sky.

When in Murray Franklin’s shows studio, the screen is soaked with royal blues clashing with the bright reds and yellows of the shows curtains. Vibrantly mixing these neon and natural lights manages to convey the dirty and griminess of the city, making it seem more realistic.

Everyone in this film is channeling from a very dark and very personal place, and nowhere is that more prevalent than in Phoenix’s award-worthy performance. It’s almost too good. Phoenix adds an extra layer to the performance by pushing the mold on how we view a protagonist. As an audience we are drawn to the goals of the main character and we hope to see those goals accomplished by the end of the film.

But as the film unravels itself and pulls the rug out from under us on what is and isn’t reality, falling down the rabbit hole of madness that is Phoenixes performance. The audience doesn’t know who to root for anymore. It’s as if the audience is being held captive by the film, waiting to see how this character that we sided with commits act of mass terror and anarchy.

Phoenix had some very big shoes to fill after the late Heath Ledger’s depiction of the Joker in The Dark Knight. No one can say for sure, but I feel that he would be proud of Phoenix.

The film received lots backlash from its glorification of violence, implicating that the dark and horrific events portrayed in the film may inspire copy cat psychotics. Joker is a hard film to sit through, but its message of getting proper mental health care outweighs the negative implications.

Even though the tale of the clown prince of crime is fictional, the harmful abuses and disorders depicted in the film are the harsh reality for some poor souls. Seeking professional medical assistance is a necessary step for getting better. In Joker, it’s shown that the city cut the funds for many social services programs, showing a lack of care towards those suffering with mental disorders like Arthur. We as a society must do more to make sure people are getting the help that they need by promoting institutions who offer psychiatric assistance for the public, and opening a discussion of how these illnesses start and go untreated for such long periods of time.