Baby Yoda coos its way into our hearts 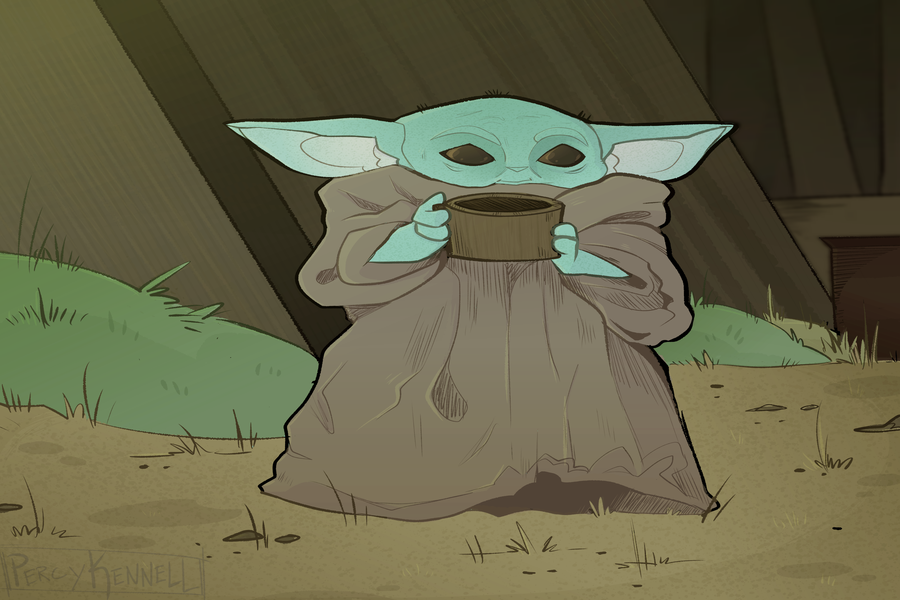 When Star Wars fans tuned in to watch the Mandalorian on Disney+ they were expecting to see a gritty space Western with galactic bounty hunting. Fans were happy to see that they got all and more, but there is one surprise stealing the show. His or her name is still unknown. In the show, they are called “the child,” but the fandom has dubbed this adorable alien “Baby Yoda.”

Creator and showrunner of the Mandalorian, Jon Favreau confirmed that “the child” isn’t actually Yoda, but is a member of Yoda’s unknown species. There have been few members of Yoda’s species in the canon. Do you remember Yaddle? Probably not. This has left lots of mystery behind their origins. Like Yoda, Baby Yoda has already demonstrated having immense powers of the Force, which could possibly be the reason for the Empire’s interest in them.

People just can’t get enough of Baby Yoda. Fans have taken this muse and run with it, creating artworks, songs, and even cakes paying tribute to this little green space baby.

Fans have been wanting to get their hands on their own Baby Yoda for the holidays, but they will have to wait until 2020 for them to be released. Favreau, asked Disney marketing directors to hold back production on Baby Yoda toys and other related advertising in order to avoid leaks and spoilers.

Star Wars is known for having a variety of cute characters in their repertoire. It seems like with each movie, show, or comic, it’s become a cliche to have an adorable side character accompany the main characters. Creatures like Porgs, Fathiers, and Ice foxes were all introduced in Star Wars the Last Jedi. These characters, especially Porgs, were loved by fans leading up to the film’s release.

Regardless of what your opinions on director Rian Johnson’s interpretations and creative decisions on the Star Wars story are, there’s no denying that Porgs were merrily there as an advertisement for Porg merchandise. They served little to no purpose in the film’s narrative and were sometimes even a distraction from the main story. The hyped for the characters died off quickly.

In 1983, when Star Wars Return of the Jedi was released, fans were quick to dump hatred on the fuzzy teddy bears of Endor. The hate for Ewoks has lasted for over 30 years, becoming a staple trait in the fandom. Stephen Colbert even once ate an Ewok on air. We love to hate these cute little fuzz balls, but why?

The Empire was the most powerful force in the galaxy. They terrorized citizens and destroyed planets with ease. So the fact that they were defeated by a bunch of Care Bears in the woods was pitiful and unrealistic. Ewoks also spoke in gibberish which quickly got annoying.

Baby Yoda is no Ewok.

Yoda is one of the most loved and iconic characters in cinematic history. In the Star Wars universe, he’s admired all over the galaxy. The wisdom he bestows to Luke, as well to the audience, inspires clarity and hope in the hearts of many. Yoda has also been interpreted as a wise old alien, dawning many wrinkles and gray hairs. This has been the image of Yoda and his species for decades, until “the Child.” This re-imagining invokes a sense of nostalgia and familiarity, and gives people a look at what Yoda probably looked like when he was a baby.

When just looking at Baby Yoda, it’s clear that he’s adorable. I would give my life for him if I had too. Why is that? The science behind cuteness or Kindchenschema for short defines the qualities and physical features that universally people find cute. Large eyes, round cheeks, big head relative to body,  small chin and small noise are all features we generally find cute. Baby Yoda has all of these qualities, as well as their big ears, which relates back to that sense of nostalgia, reminding us of Yoda’s ears.

Baby Yoda also serves as a vital part of the Mandalorian story. This little package packs a big punch, demonstrated in chapter 2, when the Mando had to face off against a powerful bull-like animal. After the Mando’s armor was severely  damaged, Baby Yoda swoops in and uses The Force to lift the bull into the air, giving the Mando enough time to get his bearings and get back in the fight.

This combo of combat and cuteness was also scene in, Guardians of the Galaxy Volume 2. Baby Groot was everywhere following the film’s release. His cute looks mixed with his badassness made for him quickly becoming one of the film’s best parts.

The same applies with Baby Yoda. He’s a character you can cuddle with one day and go guns blazing with another. His addition to the Star Wars universe is something most fans and casual watchers weren’t expecting, but love having. I as a long time fan I can’t wait to see what lies ahead for this little green gum drop. The Force is strong with this one.