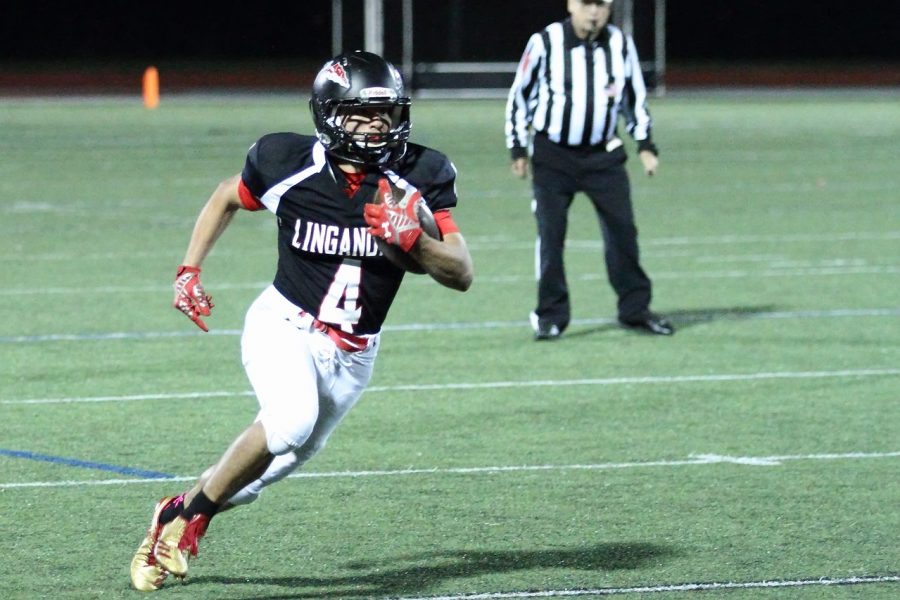 Running back Johan Samayoa runs down the Linganore sideline on huge run.

After their 32-0 win against the Middletown Knights, Linganore and Tuscarora battled it out on a Saturday night game after the game was postponed due to rain. The Lancers came out with an explosive start, to say the least and kept up the momentum to a 46-7 win.

The Titans got the ball at their own 50-yard line and went three and out after Michael Bromley sacked quarterback Brian Jester. The Lancers retained the ball at their own 31-yard line. They ran a simple inside zone run with Davon Butler. Butler split in between tackle Matt Beekey and guard Scott Hummel, running right through the secondary for a 69-yard touchdown run for the Lancers’ first play from scrimmage.

About 2 minutes later, the Lancers got the ball at the 48-yard line after the Titans 6-play drive was ended with a loss of yards on an Aris Hilliard run. Butler helped get the offense to the 34-yard line in Titans territory. Ryan Leyh threw a deep crossing route to Joey Felton to set the Lancers up at the 5-yard line. Butler was able to punch in his second ticket to boost the lead to 14-0 with 6:36 remaining in the first quarter.

The Titans offense was still unable to capitalize off of a decent field position. They received the ball at the 45-yard line. After two Jordan Addison runs, their offense was stuffed twice at the line of scrimmage by the Lancers’ defensive line.

The defense for Linganore is coming off of one of the best performances this year, with a handful of sacks led by Dustin Keith (4.5 sacks). A delay of game penalty forced a turn in possessions, one of nine penalties on the night.

A 15-yard run and a 27-yard run by Johan Samayoa led up to an 18-yard touchdown by Leyh. The Lancers’ backs finished with a total of 299 yards, Butler with 135 yards himself on just 11 carries.

Running back Xander McClure said, “Our line did amazing tonight. I can’t stress it enough. They opened up a lot of holes for our backs.”

Lancers got the ball at the Titans’ 4-yard line after defensive end Cole Mitchell picked off Jester from the 15-yard line. Unfortunately, Butler fumbled at the goal line for what looked to be a touchdown. It didn’t matter, however, because two plays later, Garrett Reese sacked Jester for a safety with 41 seconds left in the first quarter.

Lancers would gain the ball at the 48-yard line. Six plays into the drive, Felton got a reverse run for 24 yards. That set up a 25-yard screen pass and run to Samayoa from Leyh. This placed the offense at the 2-yard line and ended the drive with a Jackson Ambush touchdown.

The ensuing Titans possession ended with another Reese sack and an incompletion by Jester. The Lancers got a good return to the Titans’ 39-yard line. Butler ran twice, which led to his hat-trick of touchdowns to extend the lead to 36-0.

Going into the end of the half with 3:10 remaining, the Lancers had a 7-play drive that ended with Ambush’s second touchdown. The half ended with a Bennett Formulak 39-yard field goal.

Aris Hilliard was able to get the Titans their first score for a 92-yard touchdown. Hilliard struggled all night but did have some decent gains.

The Lancers (8-1) will go up against the Urbana Hawks (2-7) in the regular season finale. Follow @linganorefb, @Frederick_Sports, and @Jason_Byrd2021 for Lignaore football coverage. Also, follow @LHSJournalism for more news at Linganore High School.