Week 5: Varsity football pulls off a surprising shutout against Lions 35-0 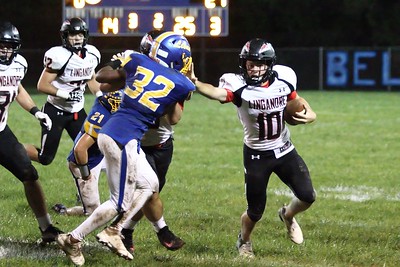 Will Coletti returns a punt to set up the Lancers with good field position.

“Where is Wetzel?” This is one of the chants that student section chanted during the game. This chant really had an effect on Walkersville offense.

Former senior running back Jacob Wetzel was the Lions’ best offensive weapon for the last two years. When he left, the Lions couldn’t quite fill the running back position to Wetzel’s caliber. This was very evident in the game vs. Linganore, as the Lions ran the ball 19 times for only 30 yards in the first half.

Even as the Lions struggled on offense, so did the Lancers. Ryan Leyh threw two interceptions in the first half.

Leyh said, “No excuses. I didn’t play well. I need to pick it up,” in a Frederick News-Post article on the game.

However, there were some very exciting moments in the first half. After the Lancers’ defense forced the Lions to punt after a 5 minute, 17-second drive, Leyh and the offense was set up at their own 20-yard line. Leyh threw two incompletions. But on a 3rd down and 10, Leyh tossed one up to receiver Joey Felton. Felton ran a double move and beat the safety. Felton caught the ball and didn’t look back for an 80-yard catch and run for the Lancers’ first touchdown of the night.

As the second quarter was winding down its final minute of play, the Lancers made an impressive stop to force a 3 and out. A timeout was called with 46 seconds left after the punt. After a delay of game penalty and an incompletion from Leyh, the Lancers were looking at a 2 and 15 from their own 36-yard line. A handoff to running back Johan Samayoa went for 28 yards down to the Lions’ 35-yard line. With about 35 seconds left, Leyh found Felton once again across the middle for a 35-yard touchdown pass that put Linganore with a 14-0 lead going into the half.

Coach Conner gave his team a sound off going into the second half. “We’ve made our statement. Now, let’s finish it!”

The Lancers’ second possession of the half was a good one. Their 13 play, 4 minute and 36-second drive led to a Jackson Ambush goal line run from the 5. The drive was really given life because of sophomore running back Xander McClure, as he rushed for 37 yards on just 5 runs.

“Our work effort separated our running game from theirs [Walkersville]. Don’t get me wrong, they’re a good football team. But we had a defense that was able to stop their offense,” said lineman Matt Beekey

Momentum for the Lancers really shifted to their side after a Joey Bromley sack to force a punt. This was the only punt that the Lancers had returned all night, and it was a big return. Felton caught the ball and ran towards the right side. However, he handed off the ball to Will Coletti and he went from around the Lancers’ own 30-yard line to the Lions’ 34-yard line. As the Lancer sideline hyped up the offense, Leyh threw two passes, one to the 6’4″ receiver Matt Schiller for a difficult 25-yard pass and catch. The other pass was to tight end Mason Wills in the back of the end zone for a 9-yard touchdown.

As the Lancers retained their second-to-last possession of the game, a 5 play drive ended with a big McClure run for 33 yards into the end zone. The huge touchdown run was set up by two other McClure carries, a Joey Bruscia run, and a Leyh pass to Schiller.

“Our main focus was to stop the run game. The last two years, that’s what they go off of and we were able to stop them,” said Coletti.

After the game, Coach O’Connor said, “We adjusted to some adversity. We’ve been preparing for this game and we were able to put in the work and play fairly well.”

Linganore (5-0) faces Oakdale (4-0) at Linganore for the Lancers’ biggest game all year. Follow @linganorefb, @Jason_Byrd2021, and @FrederickSports. Also, follow @LHSJournalism to read on Linganore’s varsity team throughout the season.