Week 4: Varsity defense leads to a demolition against TJ 57-13 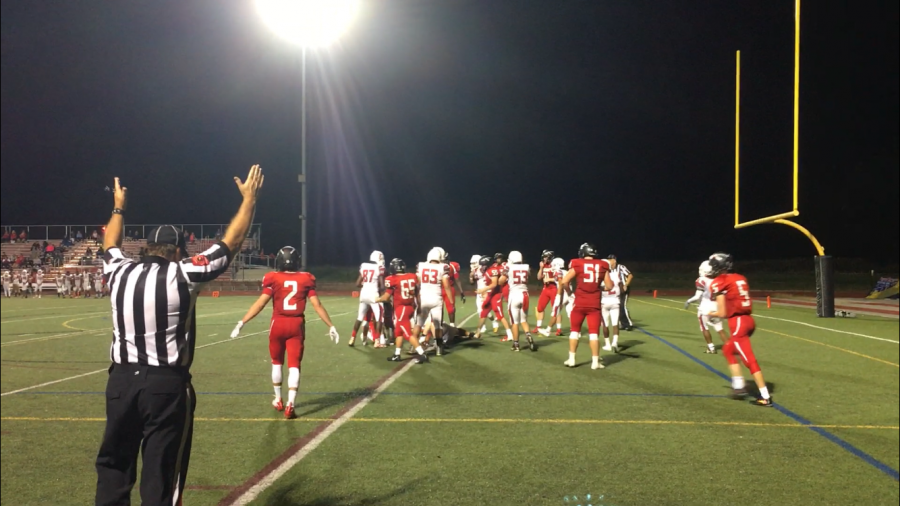 Xander McClure rushed in for a goal line touchdown.

Varsity football completely buried the Patriots from the get-go. The Lancers stated off the game and forced a quick 3 and out. Ryan Leyh and the rest of the offense came out onto the Patriots’ 40-yard line. It didn’t take much for the offense to start their 50-0 run as wide receiver Joey Felton took a reverse run 40 yards to the house. The possession took not even 15 seconds.

The Patriots come out for their second drive of the night and repeated their first drive. However, a fumbled punt placed the Lancers at TJ’s own 13-yard line. It was light work from there as running backs Johan Samayoa and Joey Bruscia punched in another touchdown.

The Lancers were set up at their own 47-yard line after TJ failed to gain a first down with an 8-play drive. After a Bruscia 18 yard run, Leyh found wide receiver and kicker Bennett Formulak for a 28-yard touchdown pass. The most electrifying part of the whole play was Formulak’s catch. With a defender all over him, he climbed the ladder and made a tough catch that put Linganore up 21-0 with 1:39 remaining.

On the topic of offensive efficiency, Coach Rich said, “We’re focusing on no negative plays. Every play is a positive gain. Every single player matters to us and they need to be ready to play.”

Jumping ahead into the second quarter with 11:49 left in the half, a high snap led to a fumble and recovered by TJ. Jackson Ambush said to Ryan Leyh, “Don’t worry, I got you.” He did indeed keep that promise as two plays later, Ambush picked off quarterback Matt Fowkes and returned it to the Lancers own 43-yard line. After another Leyh to Formulak connection, the pass set up a Samayoa 18 yard misdirection touchdown run.

The ensuing possession for TJ had them pinned at their 17-yard line. After they earn their third penalty out of a total seven on the night, the Patriots tried a fake punt on 4 and 15. The failed fake punt landed the Lancers on TJ’s 4-yard line, making that the third time up to that point that the varsity team had the ball on TJ’s side of the field. Nick Hayslett ran in another Lancer touchdown from the 3-yard line.

TJ went back onto the field, hoping to gain some momentum. However, they ended with the same result they had gotten most of the night: another 3 and out. With TJ at their own 7-yard line, TJ tried to punt but Dalton Pearl was able to block the punt and earn the Lancers a safety. Pearl’s blocked punt was just one of three during the game, with the other two coming from Jeremy Hilton and Jake Santis.

A three-play drive led to a Xander McClure touchdown run after a TJ offsides penalty. After Fowkes couldn’t get it done on 4th down, Leyh rans in a 22-yard touchdown run down the left sideline off of a QB keeper run.

With about 4 minutes left in the half, the Patriots were finally able to score. Fowkes threw a 21-yard touchdown pass to receiver Kamani Quander. TJ got on the board as the Lancers went into the half with a 50-7 lead.

TJ came onto the field after a Lancer 3 and out and had a 12 play, 81-yard drive that ended with a rushing touchdown. The drive took 10:00 minutes on a running clock and finished out the third quarter.

Fast-forward to the fourth quarter with about 5 minutes remaining, Nick Hayslett took an amazing 52-yard touchdown run, making that the first ‘black’ offense touchdown of the year. The ‘black’ offense is the backup offense team and was able to score after a few short promising drives.

Max Ross sealed up the game for the Lancers as he recovered a fumble off of the kick return. The clock struck triple zeros as Linganore captured a 57-13 win, making them 4-0 on the year.

“We still have to fix some things, we didn’t play a great game but we played well enough,” said Coach Conner when asked on the preparation of their game against Walkersville next week.

“We covered our guys and did our assignments and we proved it on the field,” said cornerback Brady Domroe. “However, we have to realize that the team we play next week [Walkersville] is gonna be much more difficult.”