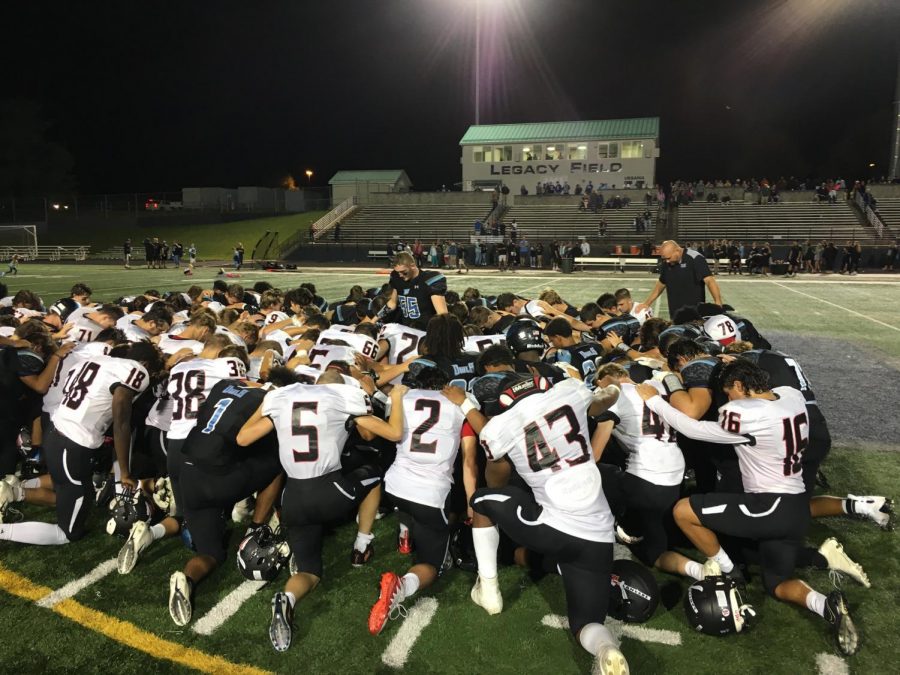 Linganore and Westminster unite at midfield for a postgame huddle.

As crazy as this game was, there was only one way to cap off the outstanding night the varsity football team was having. With just 45 seconds left on a running, on a 4th down and 5 at the Owls’ 33-yard line, a pass that traveled to the 45-ish yard line was tipped into the air as defensive back Ethan Zirkle gained possession and traveled back to the end zone for a pick-6.

As Ambush had also described the front defensive players, “They contained the quarterback and got pressure when they needed it. They were really able to secure tackles.”

“We took a step forward today. I’m really proud of these guys. Most of them are new and with Coach O’Connor coaching the defensive backs, we’re just pleased they’re getting better,” said Coach Connor.

Flipping over onto the offense, running back Johan Samayoa had 114 rushing yards which lead to multiple goal-line touchdowns scored by quarterback Ryan Leyh, Jackson Ambush, Ben Musselman and more. With Westminster having a fairly large defensive line of their own, the offense was really able to convert because of their offensive lineman.

“We had to get our plays right and know what calls were being made. We [offensive line] needed to everything situated and create holes for our running backs,” said starting left tackle Tre Briscoe.

Coach Conner also had a take on the performance of the offensive line. “Coach Rich and Coach Dixon do a great job teaching those guys. We’re becoming unselfish, it’s not about a certain player getting the most touchdowns. We’re pleased with where we are.”

On September 21, varsity will take on Gov. Thomas Johnson High school at Linganore High School. The game will take place at 7:00 pm. Follow Lancer Media @LHSJournalism and me @Jason_Byrd2021. To read more on the game, read Frederick News-Post writer Greg Swatek‘s story for his take on the game.