Week 7: Linganore gains some swagger back in a 50-6 game against the Kennedy Cavaliers

by Jason Byrd and Bailey Spore 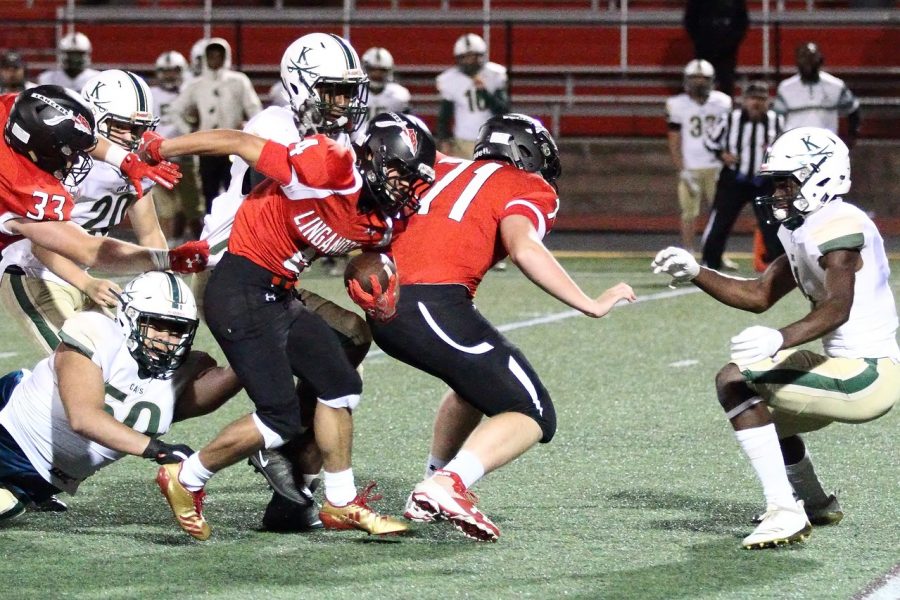 After the devastating loss against Oakdale last week, the Lancers really needed to gain some of their momentum and confidence back. On October 12, they regained some swagger in a game where so many players were able to make huge plays.

The Lancers were scored in the first 11 seconds exactly. The opening kickoff was short at about the 25-yard line. Yale commit Joey Felton received the kick, juked two defenders, and shot up a gap for a 75-yard kick return touchdown. This was the first punt or kick return of the year that was returned for points. After that, the Cavs just couldn’t get a grip on the game.

The Cavs struggled all night, running the ball for only 4 yards on 11 carries. They were able to get few positive runs, but every time they had a gain of yards on the run, they would lose yards on the following play. Their first drive, they went 3 and out, not even passing their own 20-yard line.

Linganore got the ball at the Cavaliers’ own 49-yard line. After a Felton run and a pass completed to Bennett Formulak, Ryan Leyh found Felton on a curl route and from there, Felton took control. He turned upfield and got into the end zone from the 30-yard line. To add to the drive, Michael Bromley ran in for a 2-point conversion off a fake PAT to put the Lancers up 15-0.

Once again, the Lancers started their drive in Cavalier territory after a fake punt failed to convert a first down. Johan Samayoa took a run to the house from the 22-yard line. However, it was called back by a Felton holding penalty. On 2 and 4 from the 25, Leyh pitched one over the middle to Formulak. Formulak then ran into the end zone for the Lancers’ third score with 7:52 still remaining in the first quarter.

The Cavs were able to put together a decent drive, getting up to the 44-yard line. But they were forced to punt after Jackson Ambush speared a receiver on a third down passing play to force an incompletion. Big name Davon Butler was playing his first game of the season.

Butler said, “It feels great. I was able to get my feet wet. I was really excited to get back.”

He helped set up his teams with 4 runs for 42 yards. Along with a Leyh to Matt Schiller completion for 21 yards, Dalton Jeffers was able to punch in a goal-line touchdown run. Jeffers was in due to a Joey Bruscia injury to his ankle.

The Cavaliers once again couldn’t covert their drive into points. They punted the Lancers the ball with 1:06 to go in the quarter. After a 20-yard run by Xander McClure and a 13-yard run by Samayoa, Leyh found Formulak again for what looked like only a 10 yard gain. However, Formulak caught the ball to turn upfield and waltzed into the end zone for an insane catch-and-run touchdown from the 35-yard line.

Linganore scored 36 unanswered points in the first quarter, one of their best first-half performances of the year. The Cavs, even they were down, put together a 9 play, 2 minute 45-second scoring drive. Their score was set up after they punted on 4 down and the Lancers fumbled the punt. The Cavs recovered and punched in a goal-line run.

The Lancers were at their own 46-yard line to start out their drive. Butler was able to truck through for a 9-yard run to put the Lancers barely into Cavalier territory. Leyh dropped back and found McClure wide open on a wheel route for a 45-yard touchdown to add to their lead.

After a huge Brady Domroe hit to force a punt, the Lancers’ black(secondary) offense came onto the field. Their first two drives weren’t much, leading to punts. But the Lancers’ backup defense really stepped up. For the defensive line, Garrett Reese, who they use in certain formations, had multiple tackles for losses. John Pfaff had a sack and tackles for losses.

The Lancers’ secondary was also had an outstanding performance. Max Ross had 4 deflections, 3 of those against Kennedy’s biggest receiver and a fumble recovery. Billy Higgins forced an incompletion and had an interception that set up the offense for a score. Harry Heitzig found Jake Santis twice, once for an 11-yard reception and again for a 5-yard touchdown strike.

Linganore needed this win. Coach Rick Conner said, “We really saw what we needed to work on from the Oakdale game. We were able to read formation on defense and execute our plays on offense. Last week was last week. Can’t do anything about it.”

Linganore now prepares for their game against the Middletown Knights on October 19 at 7:00 pm. The game will take place at Linganore. Follow @linganorefb, @Frederick_Sports, and @Jason_Byrd2021 for Lignaore football coverage. Also, follow @LHSJournalism for more news at Linganore High School.