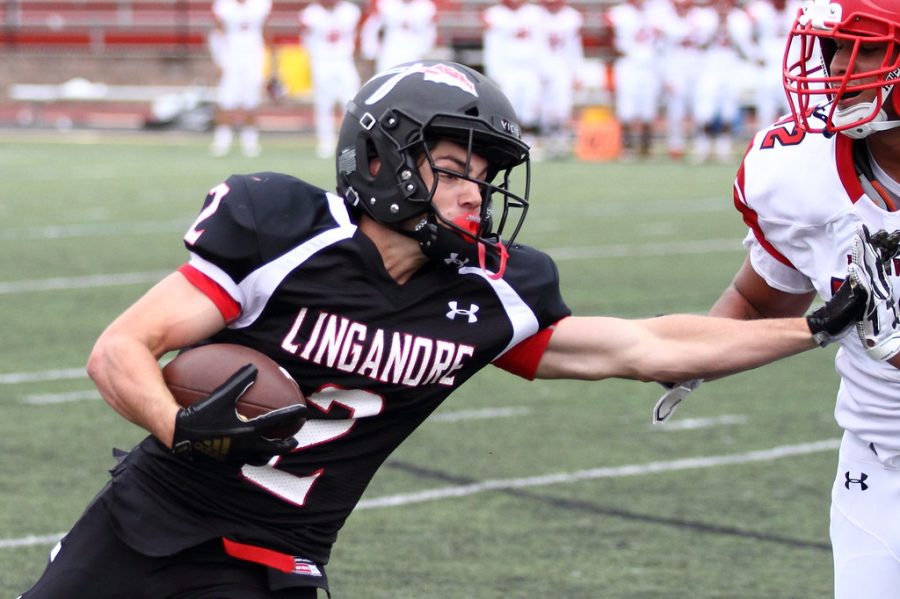 The short URL of the present article is: https://lhslance.org/sur51

Joey Felton received the short pass and, in an instant, bolted past his defender, through the Edgewood back-seven and 80 yards up the shoot. This was just a simple bubble screen, designed to give Linganore — operating at its own 10-yard-line — more breathing room. But since it’s Felton, a receiver who clocked a 4.36 40-yard dash over the summer, any mundane play has an electrifying chance.

The Lancers ended up settling for a field goal on that drive, but on the following series, the senior further showcased his home-run ability and made sure to find the end zone this time around. Felton intercepted Edgewood quarterback Antwain Banks and zipped 60 yards to the house. It was one of many pivotal plays, part of a monstrous effort that powered Linganore to a 54-18 win over Harford County’s Edgewood at home on Saturday afternoon.

Despite being matched up with Deonte Banks, a University of Maryland recruit at cornerback and dynamic ball-carrier for Edgewood, Felton finished with 331 all-purpose yards and two total touchdowns on just 13 touches. The Yale recruit had seven receptions for 191 yards, four rushes for 31 yards, one kickoff return for 40 yards and then the 60-yard pick six.

“Joey is a special player,” Linganore coach Rick Conner said. “He really did himself well today. He did us well. He was a shot in the arm.”

Going into Saturday’s 10 a.m. contest, the second straight regular-season game rescheduled because of stormy weather, Felton was eager to play against Banks. Felton certainly rose to the occasion. Linganore (2-0) marched 60 yards on its opening drive to jump ahead, 7-0, on a Jackson Ambush goal-line score. But on Edgewood’s first play from scrimmage, Deonte Banks (170 yards on 12 touches) busted loose up the left sideline, 86 yards for the long touchdown, making it 7-6 in the early minutes of regulation.

Two drives later, an 11-yard Felton gain from quarterback Ryan Leyh (12 of 16 for 261 yards and three touchdowns) helped set up a Leyh 23-yard pass and score to tight end Mason Wills, which made it 14-6.

After Joey Bruscia’s 48-yard catch and score made it 20-6, Linganore, Deonte Banks asserted himself back into the picture. The speedster accounted for 38 of Edgewood’s 60 yards on the subsequent scoring drive and capped it off with a six-yard score of his own to make it 20-12.

But that’s when Felton put his home-run ability on display, bursting 80 yards to plate a 23-yard field goal by kicker Bennett Formulak and snagging the 60-yard interception return to help give Linganore leads of 23-12 and 30-12 right before halftime.

“Playing against a guy like that … it definitely raises my level of play, because you know you have to go out and compete,” Felton said. “And when another player is playing at that high of a level, you have to retaliate and get the most points on the board as you possibly can. We tried to do that. I tried to do that the best I could.”

From there, Leyh connected with Felton on a 28-yard score that swelled the lead to 37-12 and the defense led by Dustin Keith, Joey Bromley, Michael Bromley and Jackson Ambush clamped down, forcing two turnovers and a safety that soon ignited a running clock.

Ben Musselman added a goal-line score and running back Johan Samayoa, getting most of the reps in place of the injured Davon Butler and Xander McClure, totaled 138 yards and a touchdown on 15 carries.

“I thought we did a lot of good things,” Conner said. “[Edgewood is] a good team. Overall, it was a good game for everybody.”

Up next: September 14 at 7 p.m., Linganore travels to Westminster, which will serve as another measuring stick on the Lancers’ repeat state title quest. Last year, Linganore gutted out a 16-14 win at Westminster in the 3A West region final, a game that could’ve gone either way. The Owls, like the Lancers, are 2-0 and return many impact players from last season.