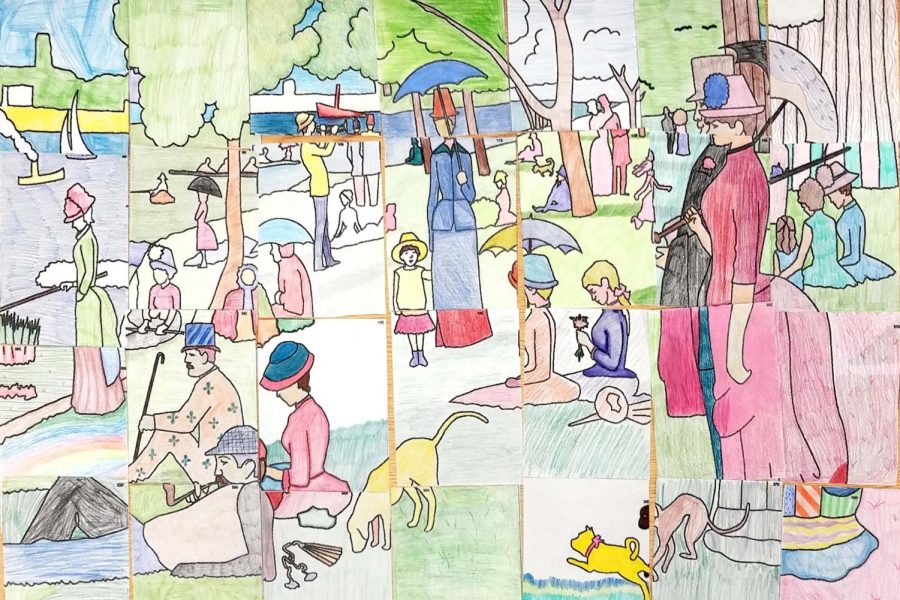 The French Honor Society worked together to replicate a Seurat painting.

On November 7, the French Honor Society (FHS) hosted activities to celebrate French artwork and culture. For one activity, the group met in French teacher Madame Dragana Blonder’s room and worked together to create an artistic chef d’œuvre (which is French for masterpiece).

Georges Seurat is one of France’s most famous artists. He is known for his innovative painting techniques, such as pointillism, which involves the use of many colored dots to create the illusion of a complete image.

The French Honor Society printed out 28 pieces of Seurat’s Un dimanche après-midi à l’Île de la Grande Jatte as a set of coloring pages. This painting is one of Seurat’s most famous works and is done in the style of pointillism. FHS members attempted to replicate this painting by each choosing a coloring sheet and coloring it in the way they thought best. Then, all of the pieces were assembled into one massive, multicolored replication of Seurat’s Grande Jatte.

Maria Bernal, the FHS officer in charge, said, “I hope that it’ll help people realize there’s more to French culture than baguettes and the Eiffel Tower.” She said that, by seeing how French artists were inspired by the countryside and landscape of France, students who study the language and culture can gain a greater appreciation of France and French culture.

Bernal said that Monet is one of her favorite French artists because she thinks his landscapes are beautiful, but that she loves Manet’s work as well.

This art event was a part of National French Week, November 1-9. The American Association of Teachers of French (AATF) established this event in 2013.

According to the AATF, French Week (La Semaine du Francais) was made to “celebrate the French language and French-speaking cultures which are found both in the U.S. and on all continents.”

Blonder said, “French Week was created to promote the learning of French in schools and outside of the classroom.”

This art activity allowed French students to celebrate French culture in an environment outside the classroom, which is the primary goal of French week.

Micah Brown, an FHS member and participant in this activity, said that this event was his favorite part of French Week because he enjoys coloring. He also said that imitating famous French paintings has enriched his life.

Another FHS member who attended this event, Hope Kingsley, said, “This was my favorite part of French Week because we got to express ourselves in new ways.” She said that, through coloring these parts of a whole painting, she learned more about French culture.

According to Blonder, the finished composition, once pieced together, will be hung in a prominent place where the rest of the school can view and appreciate it after French Week.