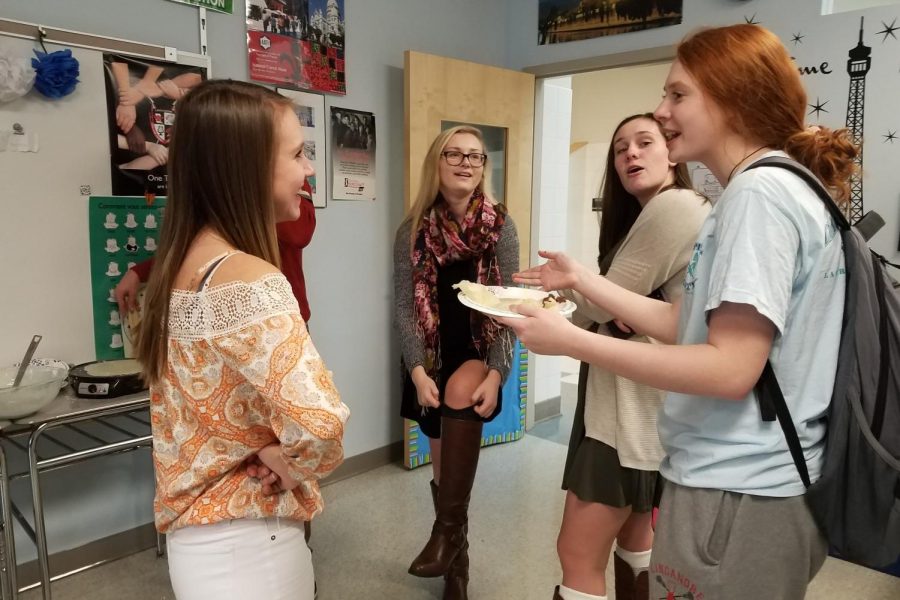 On November 8, students stayed after school in French teacher Madame Blonder’s classroom to make crêpes and converse in French. The French Honor Society hosted this event, but all students were invited to attend, from students who had completed AP French to students who had never taken a language.

Blonder, who sponsors the French Honor Society, said that she chose to structure the activity around crêpe-making because students enjoy experiencing food from around the world.

She said, “Les crêpes are always popular in French class. I thought they would attract non-French students as well.” Eight students who weren’t in the French Honor Society ended up attending the event.

Blonder said that she hoped that students would learn two things from this activity: (1) how to make crêpes; (2) how to pronounce them as “crêpes” (crehp) instead of the Americanized version: “crepes” (crayps).

French Honor Society Member Sierra Rossman said, “I think this activity is great because I love experiencing French culture and cuisine.” She said she likes her crêpes with Nutella and strawberries.

Another attendee, Allen Hopkins, has never taken a French class before. He said, “I came to this event because I wanted to immerse myself in French culture.”

This crêpe activity was a part of French Week, the annual celebration of French culture by American French students. This week was founded in 2013 by the American Association of Teachers of French (AATF).

The goal of French Week is to celebrate and promote the French language and culture outside of the classroom. The AATF has laid out several different themes of French culture, such as cuisine, music, dance, and technology, for French students to study and appreciate. This year, French Week took place from November 1 through November 9.

Blonder said, “I wanted the students to appreciate the flavor of Paris.” Blonder also said that her favorite type of crêpes are les crêpes suzette, which include cinnamon, sugar, and orange juice.

The crêpe activity, according to Rossman, was the best part of French week because she had a great time with her friends and got to embrace French culture. Rossman also said that she celebrated French Week by creating tombstones for famous deceased French people. She chose to create her tombstone for the famous Frenchman who fought in the American Revolution: Marquis de Lafayette. To learn more about this activity, check out “French students celebrate All Saints Day”.

Rossman said that she enjoys being a part of the French Honor Society because she loves speaking French and participating in French activities. She said, “I want to go to France one day and be able to understand what people are saying and not rely on translation.”

French (and crêpes) has a habit of bringing people together to have a good time. French Week is a time for everyone to learn a little more about different languages and cultures they may not be familiar with. Expanding horizons is always beneficial, and when trying new things, whether it’s travelling to Paris or trying crêpes with orange juice, you never know what you might discover.