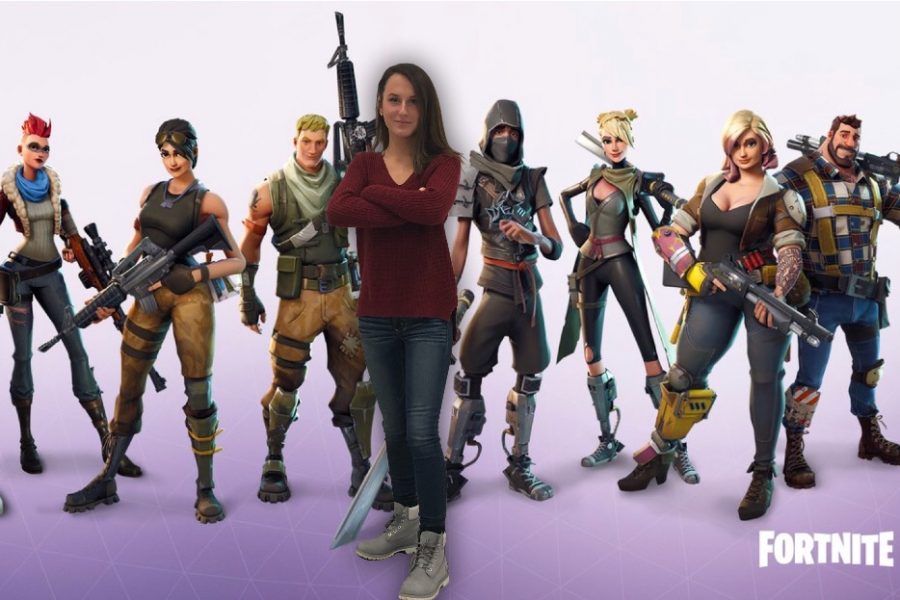 Bridget Murphy and the rest of the Fortnite characters are prepared for battle.

With 99 opponents across the island, the objective of Fortnite Battle Royale is to survive the storm while foraging for supplies to become the Battle Royale champion.

Fortnite has exploded in popularity, with users ranging from 8 to 30+, due to the game’s creative yet simple nature. It has very similar features of the PUBG video-game (PlayerUnknown’s BattleGrounds) which is only available on PC and Xbox One.  The majority of users play the free 100 player PvP Battle Royale mode where users have the choice of solo, duo or squad setting. (I prefer solo.)

A similar game, Rules of Survival, is available for download as an app on IPhone, Android and Microsoft Windows.

“Being able to play with your friends on different devices in squad or duo setting is really fun,” said Brendan Massey, Class of 2014.

The game can be downloaded on PC, Mac, Xbox One and PlayStation 4. There is another game mode besides Battle Royale, the “Save The World”  PvE Campaign, that costs $39.99 for the Standard Founder’s Pack.

Instead of paying $30.00+, my brothers and I stick to Battle Royale mode on our Xbox One.

I am no Battle Royale expert; mastering the game and learning every trick is not an easy task. Be prepared to dig in; the battle can last around 20 minutes, but once you lose, you try again. . . and again. . .

While waiting for players to join the game, there is less than a minute of time allotted to practice your moves on Spawn Island. After all 100 players have joined, the Battle Bus takes everyone to a much larger island where they fight until there is one victor.

The storm forms a few minutes after you land from the Battle Bus, and, over time, it closes in to prevent players from hiding on the edge of the map all game. If players are stuck in the storm, your player is damaged and can die from the wounds.

My favorite aspect of the game is the graphic style. The game is not overly violent for young users, yet it looks appealing.

LHS alumni and current senior at James Madison University, Daniel Rauch, said, “I love that it is so simple. It’s a new experience every game because there are always new things to find and build.”

Being able to break down trees and walls with the axe is an important skill to learn. To avoid  the struggle of going around the mountain that your avatar can’t climb, all you have to do is build ramps while you run straight up the mountain.

To be honest, the highest ranking I have ever placed is 5th; however, that was a pretty big accomplishment for me.

A cowardly but smart approach is to disguise yourself as a bush with a new costume, to hide from their opponents and wait for others to be killed. When I tried to hide as a bush, I was sniped from a player on top of a building… It didn’t really work out as I had planned.

After a player dies, every item they collected becomes fair game to everyone else. If you are lucky, the loser will have had yellow level weapons. There are four levels of supplies that are available throughout the island. Grey is the lowest strength of weapon and yellow is the highest.

Another good part of the game is that you can hear footsteps or shots fired (unless they have a silencer) from the players near you, so you have time to react.

This video game becomes addicting because there is that need to be #1 always nagging at us (like most video games). To defeat 99 opponents takes a lot of skill and time, so many are finding themselves (including me) sitting and playing Fortnite for hours.

I love this game because although I am not the best at it, it is fun to deal with all of the distractions: breaking down walls, foraging for supplies, building and running from the storm are all things you must do all while keeping an eye out for opponents.

This game is a nail-biter that provides fun for a variety of different ages and types of people. If you haven’t joined the bandwagon of Fortnite players, now is your time to hop on. Download it for free and join the squad.