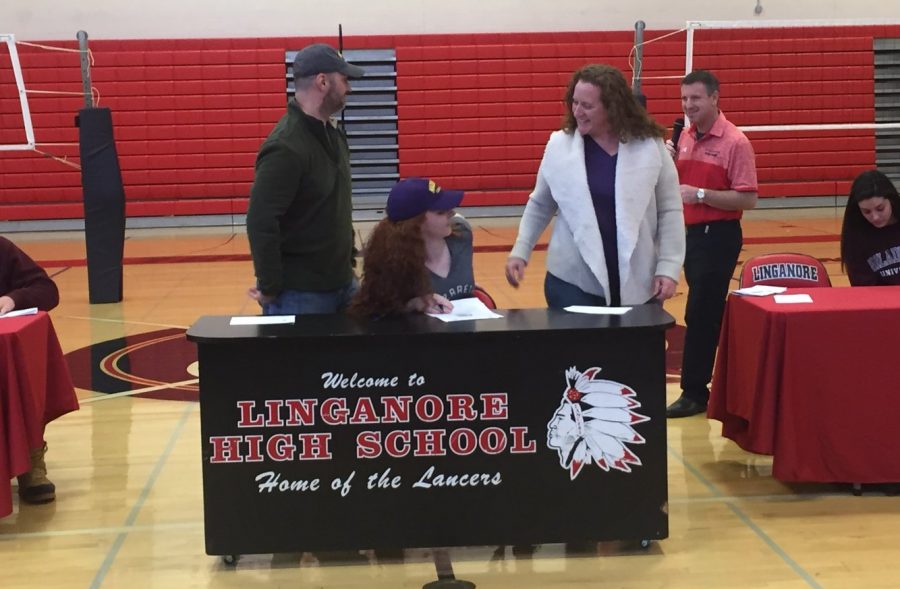 Since she was four years old, Miranda Timberlake has been in love with one sport. Soccer. On February 4, 2017, Timberlake took her first step towards her collegiate soccer career and signed her letter of intent to Nazareth College, who finished their last season 15-4-2.

During this past soccer season, Timberlake had 12 goals and a record-setting 14 assists. Timberlake, striker, now holds the record for the highest number of assists in one season for the girls soccer program at Linganore.

Timberlake was All-County, All-Region, and All-Conference, for both her junior and senior year. This year, as a senior, she earned First Team All-State and First Team All-South-Region from the National Soccer Coaches Association of America.

Timberlake had the hard choice of deciding whether to go to Nazareth College or University of Stirling in Scotland. After she visited Nazareth, her choice was clear. Timberlake said, “I fell in love with the school and I love the weather up there because it snows a lot. Also, underneath the school there are tunnels since it snows all the time. I can wear shorts to school in the middle of winter.”

Her parents, Mark and Shannon Timberlake are both sad to have their only child leave, but both are so excited to see what she accomplishes.

Mrs. Timberlake said that she was “very involved” while choosing which college her daughter was going to attend.

Mr. Timberlake said, “I’m just excited for her to start a new career and get going with life.”

Coach Howard Putterman said, “Nazareth is going to be real lucky to have her. As a leader, as a soccer player, and as a person, we’re gonna be sad to see her go.”

“I hope the best moments are yet to come,” Mrs. Timberlake said. After years of training, Timberlake is looking forward to continuing her athletic career and reaching new milestones.